Facebook
Ruben Lee, center, with fellow flight attendants during an earlier part of his United Airlines career.
Despite having more than seventy years of combined experience working for United Airlines, flight attendants Ruben Lee and Jeanne Stroup were fired by the carrier for watching a video on an iPad for approximately fifteen minutes and failing to wear aprons during one flight in September 2013. But while folks at the company may have thought they'd save money by sacking two veteran employees, they were wrong. A jury has awarded Lee and Stroup $800,000 in damages, and attorney David Lane, who represents them, predicts the final tally will come close to double that amount.

"We're not alleging United has a pattern and practice of age discrimination," Lane notes. "But in this particular case, they tried to make an example out of a couple of older flight attendants, and it backfired on them."

The complaint is accessible below, and it outlines the stellar careers of Stroup and Lee. She spent 35 years at United, starting out in 1978 as a reservation representative and earning a promotion to the technical-support team before becoming a flight attendant in 1984. During the years that followed, Stroup worked approximately 30,000 flight hours over 29 years, missing only one check-in along the way despite the occasional weather challenges in Denver. Furthermore, she never received a single customer complaint and wasn't disciplined by United until she was sacked.

Lee's record at United is similarly impressive and even longer than Stroup's. Like her, he had an unmarked record when it came to customer service and in-house discipline during forty years with the airline. He also received a commendation for his actions during a 1974 flight that had to make an emergency landing in Washington, D.C., and a silver chalice commemorating his participation in the Magnificent 700 Road Show, a traveling troupe that entertained folks at flight attendant meetings. At various points, he served as a model for new flight attendant uniforms and a regular on charter flights for the Denver Broncos during a period when the squad won two Super Bowls.

Nonetheless, the pair were both canned after they were observed on a flight from Denver to San Francisco watching an iPad and serving sans apron — infractions the lawsuit deems "trivial." 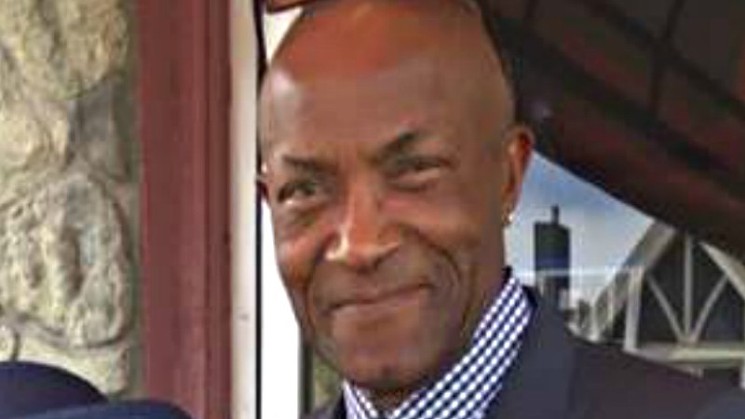 A more recent photo of Ruben Lee.
Facebook
According to Lane, United has no system for determining discipline levels for rule-breaking: "It was solely at their discretion — in the eye of any individual supervisor how serious any violation was. And that was part of our case."

How did the jury respond to this assertion? "Oh, my God," Lane replies. "They just rolled their eyes and sat back in their seats."

The jury's deliberations began earlier this month at around 9 a.m., and Lane estimates that the members were back with an $800,000 finding in favor of Stroup and Lee by 1:30 p.m. And that amount is just the beginning, he believes.

"In an age-discrimination case, the jury awards only back pay," he points out. "It's up to the judge to award front pay. So, in other words, the jury awards damages from the time of trial back to the time of termination" — a little less than five years, in this case. "But the judge decides going forward how much they are out. So they'll get several hundred thousand dollars, and my attorney fees will be several hundred thousand dollars. Add it up, and the grand total United Airlines is going to pay for age discrimination against two flight attendants is about $1.5 million."

The verdict is intended to resonate.

"At Killmer, Lane & Newman," his law firm, Lane says, "we are message senders. Generally, that's why we're in business — to send messages to civil-rights violators. And the message is always the same, which is, if you fail to protect the civil rights of your employees, it's going to cost you an arm and a leg."