Blue Moon Brewing
Break out your flip-flops and Hawaiian shirts, but make sure to keep some snow boots and a hoodie in the car; spring is here, and anything goes. Anything goes at Colorado's breweries too, and they'll be pulling out all the stops for Colorado Craft Beer Week, a week of beer education, tappings and other activities led by the Colorado Brewers Guild. But there's plenty of other fun, including four different festivals — three of them paying homage to specific beer styles. You'll also find several special tappings, an anniversary and a beer that supports the Pink Boots Society. So get ready for some delicious drinking in the rain, sleet, snow or sun. 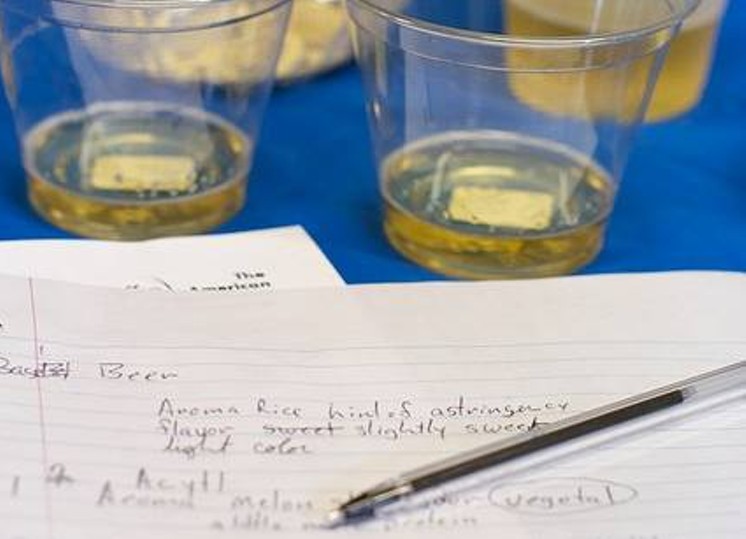 Co-Brew
Monday, April 2, through Saturday, April 7
Colorado Craft Beer Week
Multiple locations
The sixth annual Colorado Craft Beer Week kicked off Saturday, March 31, with Collaboration Fest, but it continues through April 7 with a variety of themed events each day of the week. On Monday, the theme is education, so several breweries are hosting sensory analysis classes and other events. For instance, Intrepid Sojourner hosts a class called "Turning Your Hobby Into a Business," while Crooked Stave and CO-Brew are each offering an Off Flavor Sensory Course, and Baere Brewing will discuss the Berlinerweisse style. On Tuesday, the theme is food and beer, so there will be a handful of pairing menus and beer dinners. Wednesday is Colorado Pint Day, which is designed to support the Colorado Brewers Guild. Stop in at one of several dozen breweries, buy a beer and keep the glass, which was designed by artist Brendan O’Connor from Good Land Design. One dollar from each pint sold will be donated to the CBG. Find the complete list of participating breweries on the Guild's website. Thursday is Craft Beer Gear Day, and Friday is New Beer Friday. And finally, Saturday is Tour the Brewery or Meet the Brewer day. Check your favorite brewery's Facebook page to see if it's hosting an event on any of these days, or go to coloradobeer.org, the official site for Colorado Craft Beer Week. 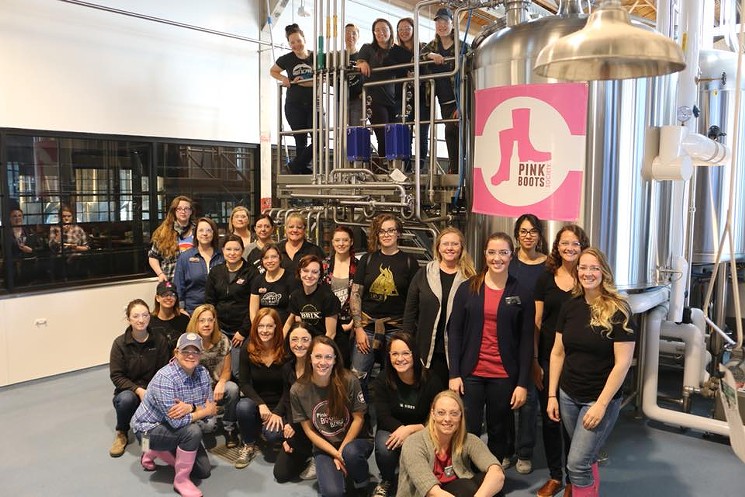 Blue Moon Brewing
Tuesday, April 10
Equal Hopportunity Pineapple IPA
Multiple locations
Last month, more than 200 women gathered at some half-dozen breweries around Colorado to brew beer in honor of International Women's Day and International Women’s Collaboration Brew Day. The largest gathering was at Blue Moon Brewing in RiNo, where about eighty members of the Pink Boots Society got together to help create Equal Hopportunity Pineapple IPA. Like the other beers, this one was brewed using a special Pink Boots Blend from YCH hops. More than fifteen bars and breweries will tap the beer and donate 100 percent of the proceeds to the nonprofit, which will use the money to fund educational and scholarship opportunities for female beer professionals. Some of the locations include: Blue Moon, Dry Dock (both locations), Great Divide (both locations), Eddyline Brewing, Mother Tucker Brewing, Woods Boss Brewing, De Steeg Brewing, Launch Pad Brewery, High Alpine Brewing, Black Shirt Brewing, Brix Taphouse and Brewery, I HOP IPA (a beer bar in Broomfield), Twenty Brew TapHouse and Colorado Plus Brew Pub. To find more information, go to the Pink Boots web site.

Rye Knot was made with two pounds of pretzels.
Strange Craft
Saturday, April 21
Denver Rye Fest
Brew on Broadway, Englewood
If you love rye-inspired ales and lagers, then the expanding annual Denver Rye Fest, taking place from 1 to 5 p.m., will put a wry — or rye — smile on your face. The Brew on Broadway will host fifteen breweries this time around, each bringing their own version of the specialty brew. The breweries this year are Black Sky, The Brew on Broadway, Strange, Caution, Chain Reaction, Rickoli, Wit’s End, Dead Hippie, Boggy Draw, Barnett & Son Brewing, Fiction, Factotum, Peak To Peak and Fermæntra. Two examples of beers include Strange Craft Rye Knot Rye Pretzel Ale, brewed with two pounds of pretzels, and Black Sky's Russian Kvass, made with house-baked rye bread. Tickets, $40, are available at eventbrite.com. Some proceeds will go to support Colorado Adaptive Sports Foundation.