For all your dark-hearted folk who still want to have a good time this week, don't worry: There's plenty in this edition of 21 best to fill your social calendar.

The Rocky Mountain College of Art + Design’s Visiting Artist, Scholar, and Designer program wraps up a year of artist lectures on the theme of “Collapsing Time” with an evening presentation by artist/animator Lilli Carré, a giant in the world of experimental animation who also excels in more traditional avenues as a comic artist and magazine illustrator. Carré’s lecture, “Ghost in a Loop,” reveals her relationship with physical and virtual life as an animator and the integrated nature of her interdisciplinary practices. Doors open at 6 p.m. Tuesday, March 20, for the lecture at 6:30 p.m. at RMCAD’s Mary Harris Auditorium, 1600 Pierce Street in Lakewood; admission is free, but an RSVP is recommended in advance at rmcad.edu/vasdp/rsvp.

Sound off on the horrors of human trafficking at Hope Lives, a program that combines music, spoken word, dance and visual art. “The concert will be set in three parts — truths, facts and hope — with music performances and revelations about the difficult subject matter,” explains Sharon Park, music curator at the Dairy Arts Center, which is hosting the event at 7:30 p.m. Wednesday, March 21. “The music selections are related to the topic or about life taking an unexpected turn; it’s going to be really powerful to hear these works in this context, and will definitely make a deep impact on our audience, helping us bring the awareness through these artistic expressions.” At the Dairy, 2590 Walnut Street in Boulder, you can also catch the art show Through Their Eyes? — paintings by Kema Miriam Berry focusing on slavery and oppression — which runs through April 15. Hope Lives tickets are $10 to $24; buy them and find more information at tickets.thedairy.org.

The jokes will fly as fast as the hadoukens as Jay Gillespie, Roger Norquist and Jeremy Pysher return to Mutiny Information Cafe for another Video Games livestream. Presented by Sexpot Comedy, March's tournament pits pixel against pixel in Capcom's outlandish Street Fighter II, among the first arcade-style crawlers to be adapted for console play. In addition to glory on the digital battlefield, players are also eligible to win fabulous prizes, including a $25 Mutiny gift card. Select your champion and vie for the title starting at 7 p.m.; each contestant pays a $5 buy-in. Find more details on Video Games' Facebook events page. Get ready...fight!

If you've eaten at the awarding-winning SAME Cafe on East Colfax Avenue, you know it's not the same old story: This is an eatery devoted to treating people with real dignity. Because of SAME's mission to provide healthy food to people of all income levels, the menu doesn't include prices; customers pay what they can or swap volunteer hours in exchange for a meal. Help feed the concept at the So All May Eat Gala from 5 to 8 p.m. Thursday, March 22, at Space Gallery, 400 Santa Fe Drive. The bash includes small plates and beverages from Que Bueno Suerte, City, O' City, The Corner Beet, Renegade Brewing Co., Woody Creek Distillers and more, and while you don't get to name your price, the night is still a bargain at $60. Get details on the SAME Cafe Facebook page and snag your tickets at eventbrite.com.

Executive opportunities for minorities in the cannabis industry are few and far between, so the Minority Cannabis Business Association has partnered with the University of Denver Daniels College of Business and Hoban Law Group of Colorado to host the MCBA Cannabis Opportunity Summit at the Daniels College of Business, 2101 South University Boulevard. Running from Thursday, March 22, through Saturday, March 24, the summit will include a wide range of speakers and work groups, with a keynote session by former Denver Bronco and Pro Football Hall of Famer Terrell Davis. Find the complete schedule and get tickets, $119, or $99 for MCBA members, at minoritycannabis.org. 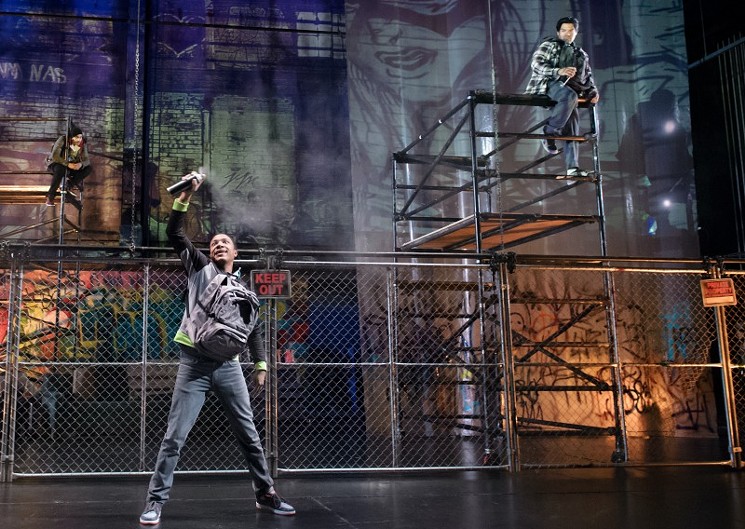 This Is Modern Art comes to Off-Center.
Courtesy of Denver Center for the Performing Arts, photo by Michael Courier
Just a couple of months ago, someone defaced the Denver Art Museum’s iconic, now-being-rehabbed Ponti Building with graffiti, a move that raised the hackles of art and architecture lovers throughout the city. This Is Modern Art, a play by Idris Goodwin and Kevin Coval, follows a similar scenario, but in this case, it’s the Art Institute of Chicago that’s tagged, setting off an examination of social-justice issues and the nature of art as a form of self-expression. The Denver Center for the Performing Arts’ Off-Center wing premieres a new staging of the play at 6:30 p.m. Thursday, March 22, directed by Goodwin himself, who is preparing to leave his teaching post at Colorado College to become the artistic director of Stage One Family Theatre in Louisville, Kentucky. This Is Modern Art runs through April 15 at the Jones Theatre in the Denver Performing Arts Complex. Tickets start at $25 (or $15 with a valid student ID); reserve seats and find more information at denvercenter.org.

Are nerds funny? Learn the definitive answer to that question when the Denver Museum of Nature & Science hosts Peer Revue: Stand-Up Comedy for Science and local scientists take their chances on stage at the geekiest open mic ever. Although Mother Nature often has the last laugh, we’re rooting for science this round. Peer Revue runs from 7:30 to 9 p.m. Thursday, March 22, at the DMNS, 2001 Colorado Boulevard. Tickets to the eighteen-and-over event, which includes a cash bar — because, you know, comedy — are $12 to $15 at dmns.org.