Courtesy of Hunter Leggitt Studio
The Octopus Initiative art-lending library opens at MCA Denver.
MCA Denver is upping the ante in its quest to bring art to new audiences and support local artists by launching the Octopus Initiative, an art-lending library that’s also an experiment in mutual trust. The octopus reference translates into MCA’s goal to “put art in the hands of many” — specifically, art initially commissioned from notable local artists: Sierra Montoya Barela, Molly Bounds, Suchitra Mattai, Chris Oatey, Laura Shill and Derrick Velasquez, followed shortly by additional works by Viviane Le Courtois, Clark Richert and Diego Rodriguez-Warner, all of whom will create 25 works each to kick off the library concept. Eventually, twenty or more artists will be represented, contributing a total of 500 works that will be cycled through the library. We caught up with the MCA’s Adam Lerner to learn more about why the Octopus Initiative is good for Denver.

Adam Lerner: The idea truly began with us sitting around a room saying, “What would Denver artists need most at this moment?” The obvious answer is that what everyone needs is for people to buy their work. It didn't take too long to get to the point of deciding to give it away for free.

At first, we thought maybe it would be best to just give artists money, but in some way, that didn't seem as impactful. There’s something administrative about that. Here, you're collaborating to bring attention to the artists.
It’s like we’re saying, "We value that you're here, and that’s why we want to connect our audience to the artists."

We decided, “Maybe let’s buy from them, and then keep it and lend it,” and that’s how the concept began. What we’re doing now is the initial pilot phase: We’re ultimately commissioning 500 works, and each artist gets a fee for the work. But they also get money to pay for their studio spaces. We know that it’s especially hard on artists to do work in this city. Molly Bounds, "On Looker," 2017. Relief print on paper, 17 x 13 x 1 in.
Courtesy of Molly Bounds
So the supply side is taken care of. How do you expect the program to play out on the other side?

I don't know who will take advantage of the program, but I’m sure some of those people — young professionals— will be part of the new Denver. But we want them to understand that the artists who work here are part of what makes our city so attractive.

Can you elaborate on the curatorial process?

We identified a group of our peers in the city, choosing maybe seven to ten people who are artists or arts professionals. We were interested in covering as wide a spectrum as we could find — people who come from circles of art we might not know.

Each nominated three people, and then we did the research and selected artists based upon those nominations. So far we have nine artists, but that’s just the first phase.

Suchitra Mattai, "Trapeze," 2017. Thread on vintage print, 12 x 15 x 1 in.
Courtesy of Suchitra Mattai
How will the initial twenty artists be cycled in and out of the physical library collection as time passes?

The idea is that we have twenty or so artists, maybe more, who give us 500 works. I hope three-quarters of the works will at any time be out in homes, leaving 75 to 100 works here in museum. When people come to the museum, they will be able to savor the works they like and enter the lottery online, and every month we will announce who can check out those works.

There’s math involved. It should work. Obviously, we’re in the pilot phase, but we assumed there would be more demand than works available, and that’s why we decided it would be determined by a lottery. Also, if you select a work but didn't win, you get a better chance the next time around.

We’ll see. I think we’ll start to see what happens, whether or not a monthly lottery works. So far, the response has been positive. 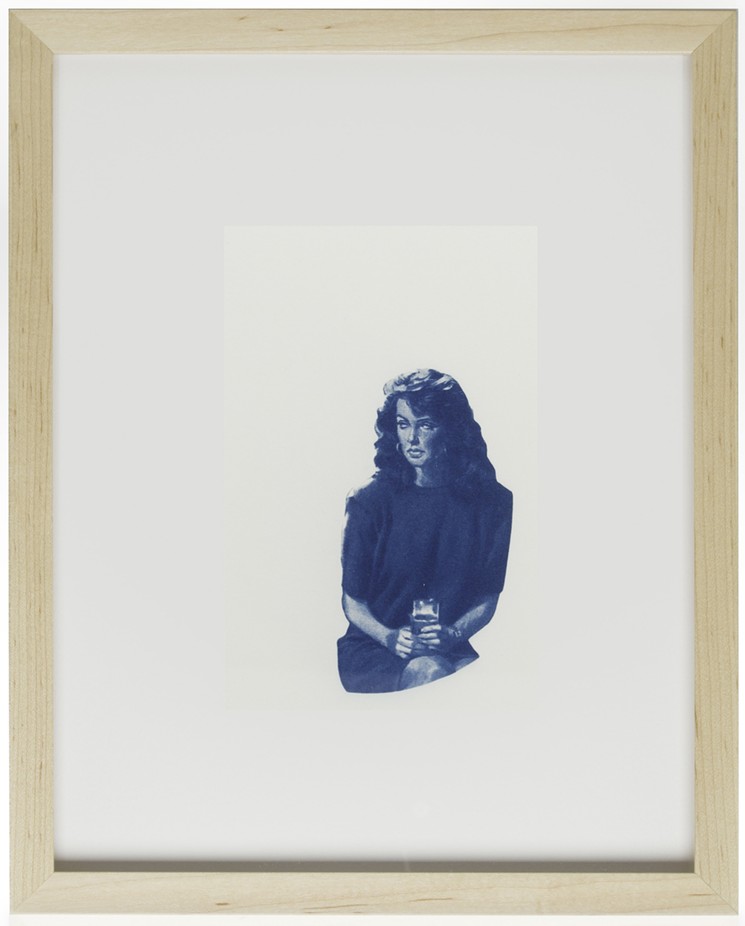 Laura Shill, "A Date with Destiny," 2017. Cyanotype on paper, 13 x 10 x 1 in.
Courtesy of Laura Shill
How is the Octopus Initiative financed?

We have a lot of options when we talk to donors. A lot of them give to support the building or our education programs. I was surprised that this was one of the first things funded. It was funded even before our capital project was funded. I would think philanthropists would be more accustomed to giving for the building. It says something about our donors — and also about the program’s sustainability — that we could get this sponsored and passed on by the generosity of our donors.

That says something about Denver, too. There are not a lot of marquee-named artists here that would give donors prestige. This is truly about helping artists in Denver to stay here within the community. Chris Oatey, "Spread," 2017. Graphite on paper, 17 x 21 x 1 in.
Courtesy of Chris Oatey
Is there a loophole where happy borrowers can buy a work if they don’t want to give it up?

Think about who will borrow works: Half of them have always loved works by Molly Bounds or Derrick Velasquez or Suchitra Mattai, but they’ve never been able to buy it. They can’t afford it, but they come out to the openings to give support. Those are mostly people who are in the art community. Half the people have never heard of any of those artists, but once they’ve seen the work, they’re the ones who are now going to start showing up at openings to support them.

We did a lot of focus groups on this at the beginning phase and decided it wouldn’t be sustainable to take the works from the inventory. If you want to buy a work, we’ll give you the information to contact the gallery or the artist directly. That eliminates any problems between artists and their dealers. It just makes things a little simpler.

Sierra Montoya Barela, "Untitled III," 2017. Mixed media on paper, 18 x 14 x 1 in.
Courtesy of Sierra Montoya Barela
Learn how the program works at the Octopus Initiative Launch Party on Thursday, March 15, from 4 to 9 p.m. at MCA Denver, 1485 Delgany Street, with penny admission, an artist meet-and-greet and a chance to sign up for and win a lottery to be among the first to take home a work of art for a ten-month hang. The first lottery will be held on April 15.