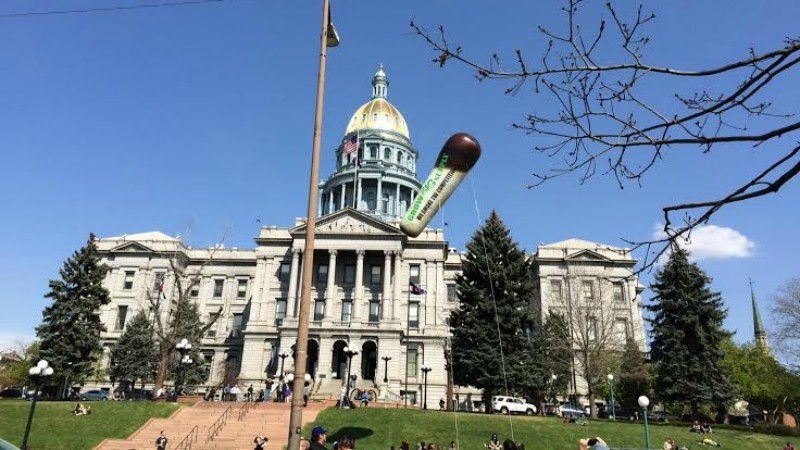 Photo by William Breathes
At 11 a.m. today, March 16, at the State Capitol, assorted legislators will be gathering for the introductory meeting of the Colorado Cannabis Caucus, a new group envisioned as a version of the federal Congressional Cannabis Caucus, except for state representatives. According to an executive of the National Organization for the Reform of Marijuana Laws (NORML), which played a role in organizing the gathering, the caucus is likely the first of its kind in any state, but it won't be the last.

"This kind of caucus is something we at the national level have been looking at for quite some time," says NORML outreach director Kevin Mahmalji, who's based in Denver. "Since the formation of the Congressional Cannabis Caucus, it just made sense to have something similar at the state level."

Several members of Congress from Colorado are part of the Congressional Cannabis Caucus, including Jared Polis.

According to Mahmalji, "we've had several internal discussions about a Colorado cannabis caucus over the last year or two. But during Denver NORML's lobby day last year, I ran into Representative Leslie Herod" — who recently appeared in these pages to advocate for a safe-use injection site pilot program that failed to pass — "and she latched onto the idea of facilitating an informal space for colleagues who maybe weren't supportive of marijuana to learn about it and brush up on policy — something that's not necessarily formatted like a debate on the floor of the House, which can get pretty hostile."

Since then, Mahmalji continues, "I've been floating the idea with lawmakers, and they've definitely seen the value in it. If you look at marijuana legalization and prohibition, you're looking at positions in a lot of different areas: business, law enforcement, education. There are so many different conversations going on, but they can seem somewhat detached. This would be a way of bringing them all together."

Representative Dan Pabon was instrumental in helping set the stage for the Colorado Cannabis Caucus.
YouTube
Key to making the cannabis caucus concept a reality was Representative Dan Pabon. "His office really took charge and started rallying the troops, if you will," Mahmalji says. "I've been working with them on the caucus pretty extensively since mid-February. They've been facilitating the internal conversations with lawmakers to consider it, and now we've got a date and time on the calendar for the first meeting."

Thus far, only Democrats have committed to attend, and while Mahmalji is happy for their participation, he would love to broaden the caucus's membership.

"Ideally, we can balance it out," he says. "It doesn't have to be a fifty-fifty mix. But from an optics standpoint, getting it as close to that as possible would be important. If you have a caucus that's heavy with either party, more than likely you'll deter bipartisanship."

Today's initial get-together is expected to deal with nuts-and-bolts matters such as electing a leader and forming a structure, with the goal of being able to hit the ground running for the next legislative session, in 2019. Mahmalji expects that by then, the members will have established an agenda, as well as a plan to push it forward, much as Denver NORML is attempting to do by way of advocacy for a marijuana consumer-employment protection bill and drug testing based on cognitive impairment rather than blood draws. He also wants to make sure that the caucus isn't "hijacked to serve as just a tool for industry"; he hopes it will represent the needs of consumers and the citizenry as a whole, too.

Other state cannabis caucuses are likely to appear before long, Mahmalji believes: "Nevada doesn't have a legislative session this year, but our Las Vegas NORML chapter is all over the idea, and Washington is very interested, although this year, they're focusing on re-legalizing home cultivation. So I'm almost certain the Colorado cannabis caucus will be the first one, and we're very excited."