Everything You Need to Know About Today's March for Our Lives

Facebook/Never Again Colorado
In the aftermath of the school shooting in Parkland, Florida, organizers — mostly students — have been planning demonstrations around the U.S. for Saturday, March 24, under the banner March for Our Lives. The historic movement is calling for an end to gun violence in schools and communities, and there are now over 800 demonstrations happening in the United States and beyond, during which participants will march in solidarity with the main event in Washington, D.C.

A potentially massive March for Our Lives will take place in Denver around Civic Center Park. (Read about a similar march being planned in Fort Collins on Facebook.) On March 19, Denver City Council voted to stand in solidarity with the protesters.

Here's everything you need to know about the march, including details of the event, the march route, how to get to the starting point, and various pre-march meetups.

According to the organizing group Never Again Colorado, participants should arrive at Civic Center Park in front of the State Capitol by 1:30 p.m. on Saturday, March 24. A rally will begin at 2 p.m., and the march will proceed into the downtown area at 3 p.m.

Tay Anderson, one of the main organizers, posted the following photo of the parade route: 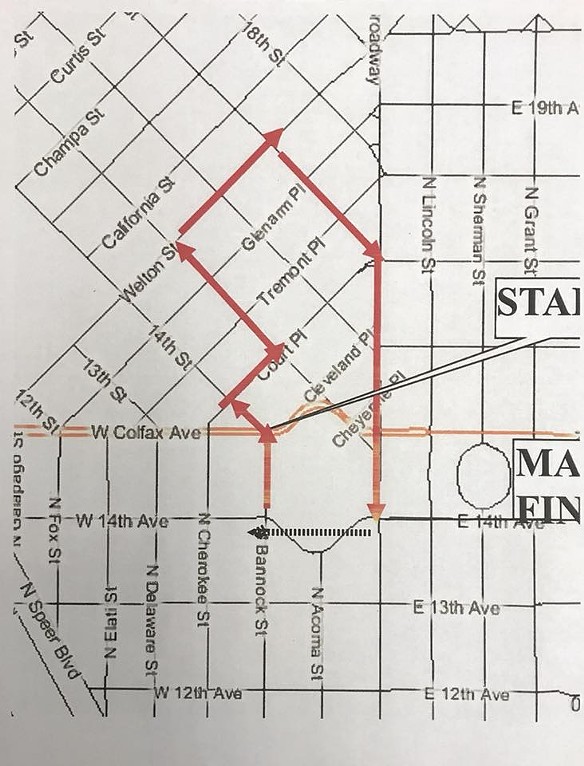 The March for Our Lives route.
Tay Anderson
The rally and march will conclude at 5 p.m.

The event’s Facebook page offers this statement: "The mission and focus of March For Our Lives is to demand that a comprehensive and effective bill be immediately brought before Congress to address these gun issues. No special interest group, no political agenda is more critical than timely passage of legislation to effectively address the gun violence issues that are rampant in our country."

The following speakers will be leading the rally on Saturday:

Organizers have raised over $22,000 on GoFundMe to buy bus tickets for students to attend and rent equipment like a PA system.

Organizers are requesting that participants RSVP at the official page to keep in touch with follow-up actions and updates after Saturday's event.

How to get there:

With crowds expected to be 30,000 people strong, parking is sure to be a nightmare around the State Capitol. Other transportation options besides driving include taking RTD bus lines along Colfax Avenue, taking the 16th Street Mall free shuttle (which has its southern terminus at Civic Center Park) or cycling to the event using the Cherry Creek bike path.

If you’re coming from Boulder or Fort Collins, bus.com is offering round-trip tickets ($30 from Boulder, $44 from Fort Collins). You can find those deals on the website.

The rideshare service Lyft will also be offering free rides on Saturday. A press release from the company offers these instructions:

Claim your free ride by RSVPing to the rally at www.marchforourlives.com/events. On Friday, March 23, ride codes will be distributed to those who have RSVP’d. If you aren’t able to RSVP, ride codes to these marches will be available at www.lyft.com/MFOL starting Saturday morning. Once you have received a code, enter it in the ‘promos’ tab of your Lyft app. For the code to work, you must enter the official March for Our Lives rallypoint as your destination. You’ll find rallypoint details in your app once you enter your code in the ‘promos’ tab. Anyone riding who is under 18 will need to be accompanied by an adult. We are only able to support free rides up to $1.5 million, so it’s important to RSVP ahead of time to get a code before that commitment is met.

A number of events before the main event on March 24 will allow attendees to meet and go to the march together. Here are a few, with descriptions and links to their Facebook event pages.

From the Facebook event page: Join us at Triple Tree Cafe before the March for our Lives demonstration in Denver to fuel up. Triple Tree Cafe will be donating poster boards and markers to help folks create signs for the march.

From the Facebook event page: Members of the Episcopal Church in Colorado and the Rocky Mountain Synod (ELCA) will be gathering at Saint John's Cathedral in Denver prior to the start of the March for Our Lives. 12:00pm: Gather for an informal lunch at Saint John's Cathedral. 12:40pm: Gather on the west lawn for a prayer service with Bishop O'Neill (Episcopal) and Bishop Gonia (Lutheran). 1:00pm: Depart for Civic Center Park to march

From the Facebook event page: “We will have some supplies available, but we do ask that you bring your own poster board and RSVP in the discussion thread for this event so we know how many people to expect. Please join us with your children, family, neighbors and friends and help us show support for the safety of our youth, our schools and our communities.