Getty Images
According to a new report cited by the Denver-based Center for Health Progress, the immigration policies enacted by the administration of President Donald Trump are not only making undocumented individuals in Colorado sick, but they're hitting the rest of the citizenry directly in the pocketbook.

"We know that immigrants are less likely to seek services at this time, including social services, public health services, health care appointments and things of that nature," says Aubrey Hill, the center's director of health systems change. "And that makes it harder for the rest of the community. When someone doesn't have insurance, they're not getting their preventative needs taken care of. That increases the likelihood of going to the emergency room, as well as costs for everybody else."

The aforementioned report, "Immigration Policy Is Health Policy," is accessible below in its entirety. The document focuses in large part on Executive Order 13768, enacted in early 2017 and subtitled "Enhancing Public Safety in the Interior of the United States." Among other things, the mandate seeks to withhold federal funds for so-called sanctuary jurisdictions — a designation that Trump supporters apply to Denver and a number of other Colorado communities. 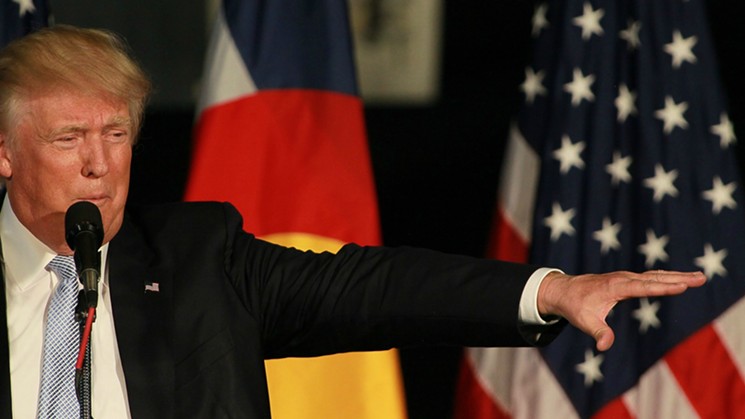 Donald Trump during a July 2016 campaign appearance in Colorado.
Photo by Brandon Marshall
That's not the only Trump-era immigration edict Hill sees as harmful, though. "There have been a lot of other policies that have followed," she says, "including the end of the DACA [Deferred Action for Childhood Arrivals] program and the travel ban."

Deportations in Colorado and Wyoming are up 145 percent, the report maintains, and that can have a direct and deleterious on children. Around 9 percent of Colorado kids risk losing one or more members of their family to deportation or detention, the study's authors estimate — and these actions are being felt on the local level.

"We understand from a number of public-health organizations and health-care organizations in Colorado that they are seeing the effects on immigrants' health as a result of these policies," Hill allows. "For example, we've seen a greater increase in toxic stress, and when people are experiencing that kind of stress over a period of time, their body doesn't really experience normalcy. Those stressors can lead to things like depression, heart disease and other health conditions we know are challenging to care for." 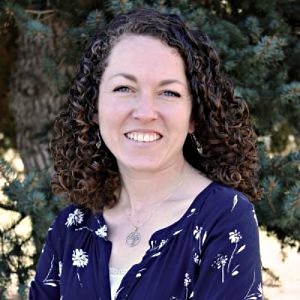 Aubrey Hill is the director of health systems change at the Center for Health Progress.
centerforhealthprogress.org
Hill acknowledges that some of this information is anecdotal: "The data systems have not been able to catch up to the trends we're seeing reported by the media and health-care institutions. But we continue to hear from pediatricians who say they're seeing kids who are afraid they're going to come home from school and their mom isn't going to be there because she's been deported."

She adds, "There's another piece of this that's based on aggregated data. The Mile High Health Alliance has done a survey of its members who've provided care for patients in Denver, and there have been increases in no-shows and cancellations and decreases in appointments by immigrants."

To Hill, "that suggests these patients are afraid of sharing their information. That can have an effect on emergency-room visits, too, and we're hearing from Colorado providers in general that they're seeing a lot of immigrant children coming to the ER with emergency conditions that could have been a lot less serious if they'd seen a primary care provider before things got so bad."

The thrust of the report, Hill says, "is to get the message out to the world that immigrant policy is health policy. So often when we talk about immigrant policy, it's totally disconnected from the public-health impact that it has on them and on the community — the rest of us. We think helping more people to make that connection is really critical."