What’s Next After Denver’s March for Our Lives? A Town Hall on Saturday

Scott Lentz
The March for Our Lives protest at Civic Center Park on March 24.
Tens of thousands — some estimate as many as 100,000 — people congregated in Civic Center Park on March 24 for the March for Our Lives. The historic demonstration, organized and led by youth in the wake of the Parkland shootings in Florida, was planned in solidarity with hundreds of marches around the country (and the world) on the same day, calling for changes to America’s gun laws and greater safety for students in schools.

It wasn’t just a one-off event, organizers maintain. Youth voices are taking the momentum from the march’s stunning turnout to pressure politicians to curb gun violence.

On Saturday, April 7, Never Again Colorado, the group behind the Denver march, will host a town hall at 6 p.m. at ThunderRidge High School in Colorado’s 6th Congressional District, with speakers including Colorado students and survivors of mass shootings. 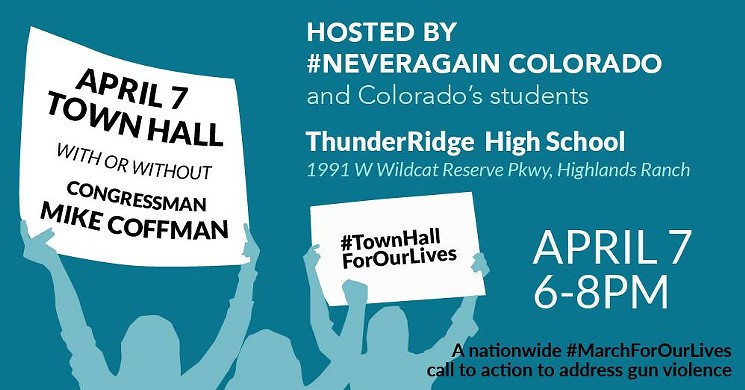 Facebook / Never Again Colorado
The youth organizers hope to engage with Colorado’s politicians, but they aren’t banking on it. The town hall will happen “with or without Congressman Mike Coffman," organizers announced in a statement. "The organization has also invited Coffman's declared Democratic opponents, Jason Crow and Levi Tillemann, and Senator Cory Gardner to speak at this event.”

“I believe in the power of student voice and student leadership,” says Tay Anderson, president of Never Again Colorado. “We are the next generation of voters, and we will vote. So we ask Senator Cory Gardner and Congressman Mike Coffman to join us and have a conversation about gun violence. It’s time they take our voices seriously, because if we as young people can turn out over 100,000 people to a rally, [we'll] be coming back to vote.”

“For me, having a town hall is about nothing more than holding our leaders accountable,” adds Jack Sironen, director of College Outreach at Never Again Colorado. “Showing that we, as their constituents, are who they are supposed to answer to. Gun violence in our nation affects every American, and as such, our leaders need to respond to the voices of the people who are suffering from this issue.”

More details about the town hall, including how to RSVP, can be found on Facebook.

Update: After this story was published, we heard from a Coffman's spokesman; that response is in a follow-up piece.