Emily Harraka
Mona Magno, aka Monalicious, is the lead vocalist in local band Twin Flame Medicine.
Mona Magno, aka Monalicious, has a passion for building community. She performs with the band Twin Flame Medicine, organizes the nonprofit Free Music for Free People, is a partner artist with Youth on Record, and helps run the music-networking event Balanced Breakfast Denver. Each of these roles involves her love of music as well as her desire to create safe spaces for other artists in the community to network, learn and share their art.

Now she wants to celebrate that community. On Friday, April 13, her band, Twin Flame Medicine, will release its self-titled album. For the release, Magno has booked performances by other Denver artists that have influenced her.

We sat down with Magno to discuss Twin Flame Medicine’s album and how her work in the community has strengthened her own creative expression.

Westword: Tell us about the new album.

Mona Magno: I would say it’s a good representation of the beginning foundation of our sound. ... I’m the main composer. Our bass player is a large contributor, and our drummer adds final touches. He is a composer, so we can review it through him and get the song to its final stages. We wrote all of these songs in the first year of us being a band. We recorded it in November 2016 in Fort Collins, with Kris Smith. I met [Smith] through Kyle McQueen, who is the bass player who passed away. He recorded the Flowers of Mass Production Under the Sun EP. After working with him and getting such a great response from those recordings, I was super-stoked to work with him again. We went up there for a week and tracked this album and mixed it for...life happened and things got sticky along the way, but we mixed it for about eleven months.

It is an intentional album. The theme around it is empowerment, liberation and food for thought. It’s very mantra-based. Each song is very thematic. With the sound and with the words, we want to have you feeling good, [but] if you dive in deeper, there is substance. There are technical bass lines, and the words are written in a mantra-based way to kind of put you in a container of reflection. Each song is definitely a journey in, like, a little town we’ve made.

You recorded the album in November 2016, around the time of the presidential election. I feel like that was a pivotal time for artists, because they either decided to back off or go in, and so many people went in at that point in time. Is that what happened for you?

The night [Trump] was elected, we went in the studio, and the next day was the first day we recorded. ... We went into the studio and my engineer said, “We’re not going to talk about what happened, but it’s going to be okay.” I was definitely feeling super-heavy energy in myself, and I feel like I felt the importance of my words even more. It was an opportunity for me to be more intentional in the moment, like, “I’m singing for myself and potentially other people who are confused by these times.” We are trying to document the human experience through this album. Well, some of it. We’re complex. One way I feel change — we can do it through all of these different actions, but an important part of positive change is inner work. How am I able to move forward if I’m stagnant in myself? With my words, I’m trying to facilitate some of that.

Was there a primary shift for you where you began doing more work within yourself, thus more work in the community? Or was it kind of hand in hand?

It was definitely hand in hand. I’ve always felt something in me. The biggest thing is that I’m open to different ideas and different ways of thinking. I’m interested in knowing those different points of view. Because of that receptiveness, I have been able to have conversations that have influenced me. I’m human, and I’ve gone through a lot of pain in my life. Since I was very young, I’ve always sought the lessons like: How can I grow from this? My high school love broke my heart, and I came home, crying in front of my family like, “It’s going to make me a better person, I know!” 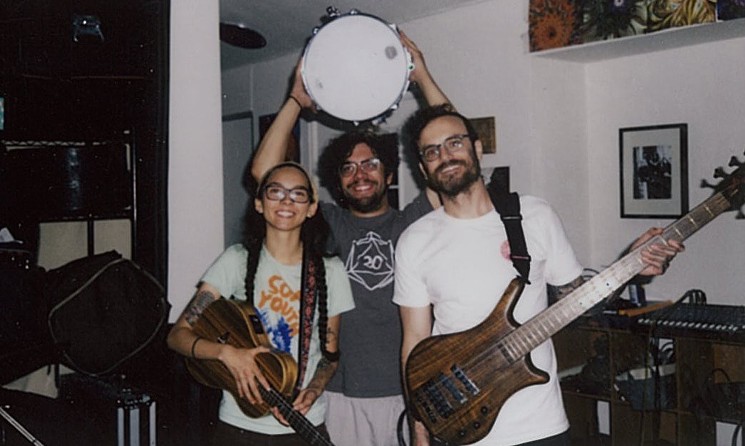 Twin Flame Medicine
Tanner Saylor
I’ve encountered a lot of artists who go into their art with the intention of basically giving themselves the advice they would’ve wanted to hear [in challenging times], which impacts anyone who hears it. Is that what you did with this album?

The name Twin Flame Medicine is obviously pointing toward music being medicine. The idea of Twin Flame — my bass player and I have the same birthday, and it’s exactly eleven years apart. So we had some number themes in the friendship dynamic. Our instruments complete a spectrum of seven strings, with the two overlapping strings. The Twin Flame idea is two souls that were one, this yin-yang energy. So our instruments definitely embody this yin-yang energy. He has this super-low vibe; I have this lighter-sounding instrument. We definitely played off of the idea of Twin Flame Medicine — the fact that we have the same birthday, the fact that our instruments completed a spectrum of strings.

On top of that, I do think music is very healing. As Victor Wooten would say, the intention behind your music is super-significant. … I think I always felt that intention and wanted each song to be this mirror which you could look at yourself through. At the end of the day, as I mentioned before, there are going to be people who are seeking that [mirror], and then there are going to be people who just want to hear music. So the music is also created for those who don’t want to dive in and just want to feel good and enjoy tasty music. We’re focused on humanness through the album. There is an empowerment message, but we aren’t stuck in the positivity. There are pockets of darkness in that human experience. In promoting realness, I’m also aware that there are people that don’t connect to that, and they aren’t excluded.

More specifically, how do you feel your work in the community has strengthened your own creativity and expression? Through Twin Flame or generally?

I’m a teacher at Colorado High School Charter with Youth on Record. Teaching is an excellent way to refine your own art. Through my community work, I’ve also felt very empowered in myself, which I think is something that I embody on stage. I’m in my element up there. To have these opportunities that make me feel super-empowered allows me to be more of myself on stage. These opportunities have added to the quality of my life, which comes through in my art and comes through in how people see me outside of my art, too. I try to post a bunch of videos on Instagram to keep people in the loop, and I think my happiness in life comes through what I share with people. I want people to see themselves in me and be like, “Whoa, this girl is doing stuff. I want to do stuff, too.”