Alex Simpson, age 26, took over ownership of Rupp's Drums on Friday, April 20, a store he first visited when he was in junior high school. Simpson’s father, a representative for drum products distributor Slobeat who sold gear to the Denver shop in the ’80s and ’90s, drove his son several hours from Wyoming to the store to buy his first kit. When Simpson started high school and needed a new drum kit, his dad took him to Rupp's again, to trade in the old set for a better one. After three years in Troopers Drum and Bugle Corps, Simpson realized he wanted to make a career out of drumming. He returned to Rupp's to purchase his first professional set, a DW Collector Series kit.

Not long after that, Simpson moved to Denver, where he’d make several visits to Rupp's, to soak up the atmosphere and “to get to know people to expand my taste and product knowledge and everything and just try to be involved,” he says. “The guys there were always incredible.”

Simpson dreamed of working at the store, which he calls a holy place for drummers nationwide, and he finally got that chance in 2012, when general manager Jim Cook hired him as a sales associate. Soon he was promoted to sales manager, a job he worked for three years while also gigging with local band Vices I Admire. He managed RocketSpace studios in Denver for a time before moving to New York in 2015, where he took a gig as manager of the Collective School of Music and was general manager of Michiko, a Times Square rehearsal studio. He also worked on a drum line that played at Giants, Nicks and Rangers games.

When Simpson heard that Brad Telepo, who bought Rupp's in 2003, was looking to sell the store, he jumped on the chance to buy it. Simpson was able to secure a Small Business Association loan and struck a deal, with big plans in mind. 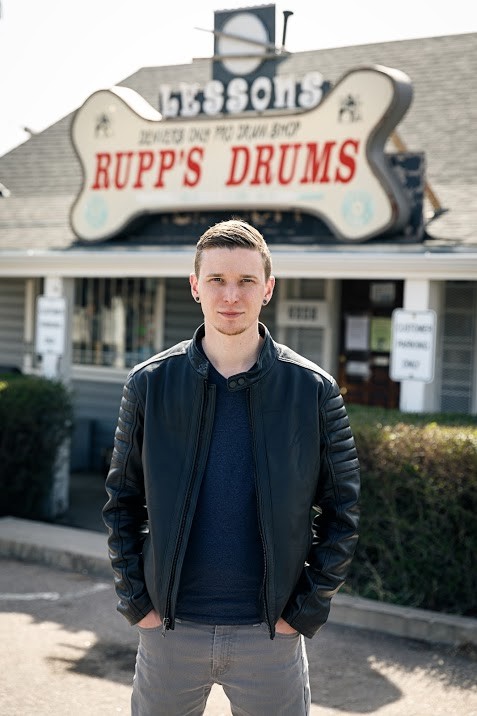 Alex Simpson
Britland Tracy
Bob Rupp founded the store in 1984 as a local grassroots effort. “He just lived, ate and breathed the store,” Simpson says. Telepo, on the other hand, has been running Rupp's mainly from his home in California for the past fifteen years and has focused on the technology of making the company profitable, installing new point-of-sale systems and increasing the store's Internet presence.

Simpson plans to bring Rupp's Drums back to its grassroots origins that made it so successful in the first place. “That is having an owner that is super-energetic and who’s going to go out into the community and make it a point to make relationships all around Colorado and bring new experiences to Colorado that drummers don’t currently have access to,” he says. “That’s generally my game plan.”

While Simpson says he plans to improve the technological advances that Telepo made, he wants to be the face at the store that people are going to get to know and to recognize, “and who’s going to want to support everyone and build relationships and get out there. I’m not going to send other people out into the community to try to kickstart things for me. It’s going to be me, physically doing it on foot.”

Simpson plans to give the store a drastic facelift and make customer experience a top priority. He will offer more drum clinics and specialized in-store services and experiences and serve not only kit drummer, but also drum corps and orchestral percussionists.

“Rupp's has a very proud, long legacy and tradition,” Simpson says. “I’m absolutely going to do everything I can to uphold that and create that same experience that I had for as many drummers as possible. Everyone who walks into the shop deserves and will get that experience from me.”