Review: Arvada's Sunday in the Park With George Is on Point 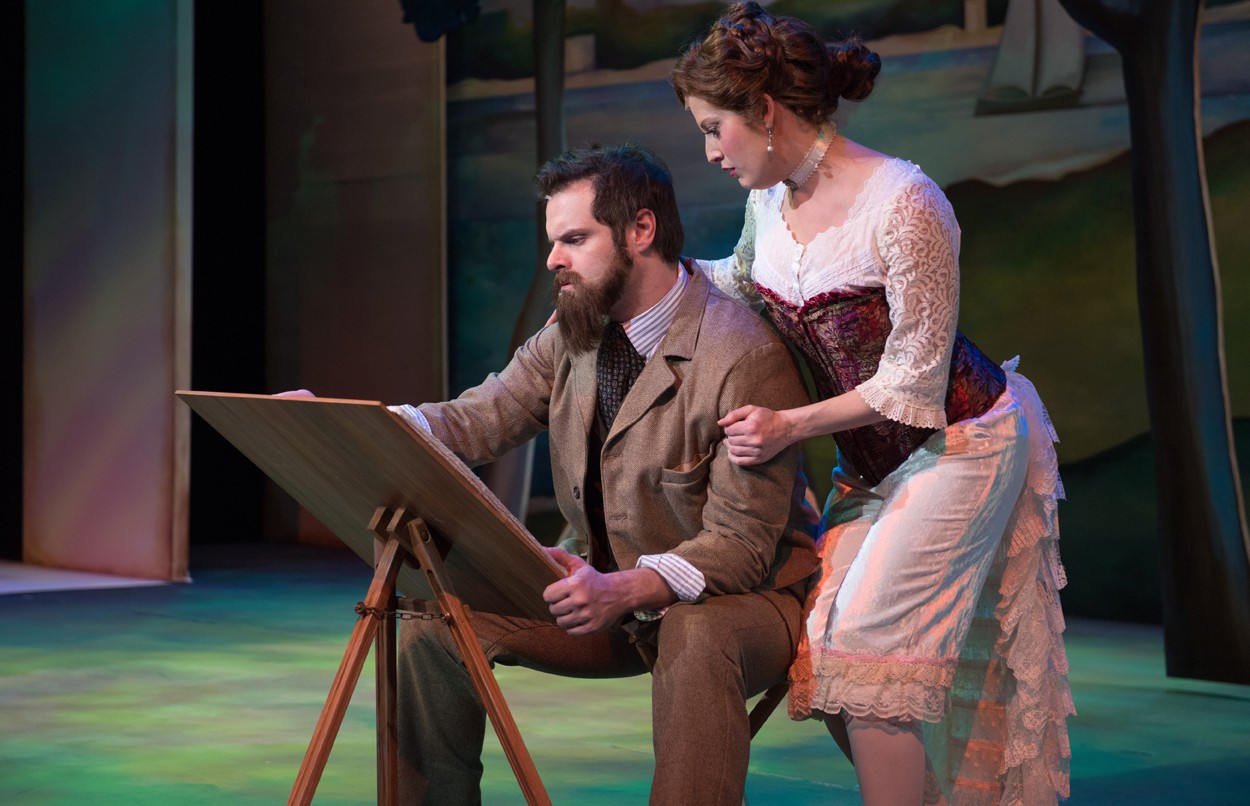 Matt Gale Photography
Cole Burden and Emily Van Fleet in Sunday in the Park With George.
Some years ago I visited a photographer — the husband of a friend of a friend — who was dying of esophageal cancer. While his wife and my friend chatted and got caught up, the photographer led me to his computer to show me his work. One image in particular has stayed in my mind, along with the emotion with which he described it. It showed a New Jersey beach crowded with swimmers and sunbathers; there were people lying on blankets, others standing or bending, children playing with buckets and spades. I don’t remember the photographer’s exact words, but I do remember their significance — he was showing me a piece that in a sense summed up his life as an artist. History and time were frozen in the image, which had been captured in the 1970s. The beach had changed since, he said, and the people would look different now: If this were a contemporary photograph, he added with an ironic smile, many more of them would be overweight. The miracle was that somehow he’d managed to capture the scene at the moment when everyone in it was doing exactly what he or she should be doing.

The musical Sunday in the Park With George, by Stephen Sondheim and James Lapine, was inspired by the most famous painting of nineteenth-century pointillist Georges Seurat, “A Sunday Afternoon on the Island of La Grande Jatte.” A study in color, light and form, it shows Parisians enjoying a day of leisure on this island in the Seine: people standing, strolling or seated on blankets, children, a couple of dogs. In the forefront on the right is the figure of a woman, standing very upright, with a corseted waist and prominent bustle, a flower in her hat and a parasol on her shoulder. Sondheim’s stunning musical imagines the artist’s process in creating this image. On the stage, Seurat arranges everything to his liking, moving the people around, getting rid of an irrelevant tree, putting together visual bits and pieces, ideas and images. The process is reflected in the technique: Standing close to the painting, viewers see thousands of differently colored dots; from a little distance, the dots assemble into images of trees, grass, water. Lapine and Sondheim, too, seem to use something of this pixelated approach.

The woman in the foreground is Seurat’s model and lover, Dot. Her first song, “Sunday in the Park With George” reveals her discontent. It’s hot; she’s sweating. She had to get up early. Most of all, she’s grieved and furious that while her lover focuses obsessively on the shapes her body creates, the position of her head or a hand, he has no awareness of her as a human being. One of the strangest and most wonderful songs is “The Day Off,” in which Seurat imagines the thoughts of a dog, giving the creature’s inner life far more attention than he’s ever paid to Dot’s: “Bit of pastry.../Piece of chicken/Here’s a handkerchief/That somebody was sick in.”

The other people depicted are a fractious lot, among them two silly flirtatious shop girls; a bad-tempered boatman; an eminent artist, Jules, and his wife, Yvonne, who mock Seurat’s work; an appalling American couple who find nothing to like in France except the pastries. Most important, there’s a good-natured baker who’s courting Dot.

This is an ambitious undertaking for director Rod Lansberry and the Arvada Center for the Arts and Humanities. The two leads are very strong: Cole Burden brings authority and expressiveness to the role of George, along with a mellifluous baritone. Emily Van Fleet, tasked with bringing warmth and emotion to the story, is an appealing and graceful presence. Unfortunately, there’s distracting overacting in some of the ancillary roles. But musical director David John Madore brings out every nuance of the spiky, difficult score, and there is a moment of beautiful lyricism at the end of act one, when the entire cast comes together to form the completed painting and their voices join and soar in the lovely song “Sunday.”

Through his art, Seurat — in the hands of Sondheim and Lapine — has welded the quarreling souls in the park into a harmonious whole. And every one of them is precisely where he or she should be.

Sunday in the Park With George, presented by the Arvada Center for the Arts and Humanities through May 6, 6901 Wadsworth Boulevard, Arvada, 720-898-7200, arvadacenter.org.