I really only knew of Steven Gordon from Facebook and as a participant in  the diverse cultural cosmos I’ve been following for more than 25 years while covering the arts in Denver. I knew he was an artist, a thinker and an experimental musician who built his own instruments, showed up at quonset-hut jams, recorded in various ensembles on Kurt Bauer’s Bangsnap Records and performed with Bauer in the ambient/experimental/folk/worldbeat/noise/improvisatory/uncategorizable ensemble ANIMAL / object.

Gordon was pretty DIY for an older guy, and I had the feeling that he pulled his creative impulses out of an intellectual ether that surrounded him wherever he went. Gordon passed away on April 30 after a battle with pancreatic cancer, but before he completed his cycle, I asked him to tackle one more hurdle, at the request of his friend Kurt: the 100CC questionnaire. His friend Katie Taft walked him through his answers in the final weeks of his life, and in a first for the Colorado Creatives series, we present it to you posthumously in his memory. Safe travels, Steve.

A poster for American Gothic 2017, a fundraiser for Steven Gordon at the Mercury Cafe.
Kurt Bauer, Bangsnap Records
Westword: What (or who) is your creative muse?

Karlheinz Stockhausen, John Cage, Marcel Duchamp, Joseph Cornell. Every one of their ideas, whether it be their music or how they compose or how they make their art, I see as puns.

In a very personal way, the way that everybody has rallied behind me as I have gotten sick, in both the visual art and the improvisational avant-garde musical community.

There is an interconnectedness, whether it’s obvious or not, and a willingness to be accepted into these communities. Their willingness to go out of their way to ply their craft. There are people from all over the world coming to play here.

Honestly, with trends I think it depends on what actually appeals to you. I don’t like the big-eyed girls and their ability to endure, and even worse when they end up looking like tattoos. Evil clowns. Nobody looks up anymore — everyone is so involved with their phones.

I like the fact that trends wear out eventually. 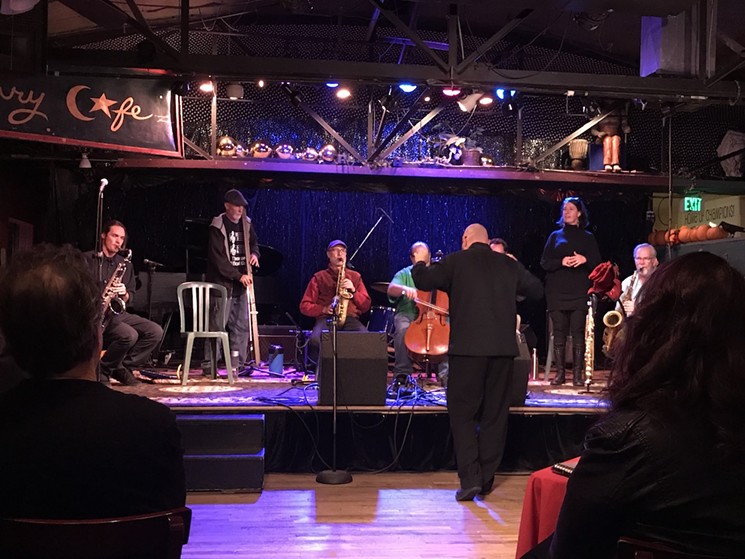 Steven Gordon (standing up with a homemade bass) and friends soundpainting at the American Gothic 2017 benefit concert.
Susan Froyd
What’s your best or favorite accomplishment as an artist?

Hmmm…getting to go to France and paint Marlene Deitrich’s apartment. That was twenty years ago. And I guess my music input with ANIMAL / object and my solo projects under the name helloprobie, if anyone would actually listen to it.

- Stay alive.
- Make more music. There are still many people that I haven’t been able to record with yet: Gil Selinger, Conrad Kehn, Josh Powers, Claudia Woodman, Darcy Kitching and many, many more.
- Stop scaring the shit out of people.
- I have a book of photographs I took while undergoing chemo that I want to publish.
- I have a journal that I have been working on that I would like to finish.
- I’m working with Conrad Kehn on graphic scores that I have inadvertently created.

Stay. My sister keeps me here, and excellent health care. 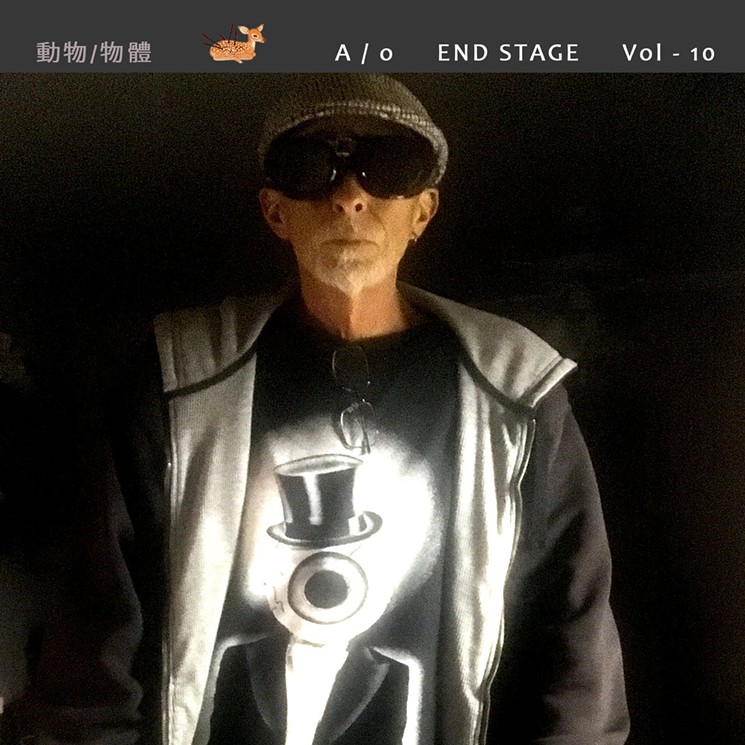 Christian Van Minnen. He’s not living in Colorado anymore, but he did, and the exquisite beauty that he brings out of the grotesque and the way he subverts pop culture into nightmare dreamscapes is incredible.

Not that they haven’t already been recognized already, but Nicole Banowetz, Mario Zoots and Kurt Bauer.

Before Steven Gordon passed, he recorded several discs with Kurt Bauer and other friends for a series titled End Stage. To sample these mashups of interviews, music, poetry and readings from his illustrated journals (and other recordings from over the years), visit Bangsnap Records online.

A Life Celebration for Steve Gordon will be held on Sunday, May 27, from 1 to 4 p.m. in the ballroom at the Mercury Cafe, 2199 California Street.