Avery Brewing
Avery Brewing, which recently sold a 30 percent stake in its business to Spanish beer giant Mahou San Miquel, is unveiling a major rebranding initiative like nothing it has done before. The new packages will begin to show up this week on store shelves — White Rascal is the first — and will roll out over the next twelve months.

"For the past 25 years, each beer package by Avery Brewing has been created independently. While Avery Brewing did go through a refresh in 2009, most of the artwork hasn’t changed much in 25 years; a testament to Avery’s legacy in the craft beer industry," the company says. "With Avery’s 25th anniversary approaching, [we] found Neil Shigley, a San Diego-based artist, to create one-of-a-kind artwork that was modern and fresh, but still honored the heritage that past designs have left on the community and fans."

Even more exciting, Avery is bringing back the Kaiser, its outstanding imperial Oktoberfest beer, but at a slightly lower ABV. It will also debut a new summer seasonal this month called Bug Zapper. A slightly sour beer, it's made with lime zest, ginger and mint, though the last two ingredients are subtle.

The owners of Outer Range and First Draft put their drinking caps on.
First Draft
Wednesday, May 9
First Draft Taproom & Kitchen is helping to create one collaboration beer per month for all of 2018. For May, the beer bar has teamed up with Frisco's Outer Range Brewing to create Garden Variety, a hazy IPA with loads of Citra, Warrior and Apollo hops; it should be available all month long. In addition, First Draft will tap several other beers from Outer Range, including In the Trees, In the Steep, Outlines and Outer Range Table Biere.

Call to Arms Brewing plans to tap two beers by today. The first is If You Can Dodge a Wrench, a 5.7 percent ABV "session" IPA dry-hopped with Grungeist, Rakau and Amarillo "for a balanced and bright hop profile of citrus & fruit with subtle pine notes," the brewery says. The second is Do You Even Juice, Bro?, a 6.7 percent ABV experimental IPA brewed with Mosaic, Waimea, Amarillo and Experimental Hop 09326. The beer, which features notes of orange, lemon zest and a hint of melon, was previously a collaboration with Cannonball Creek Brewing. "We liked it so much, we brewed it again," Call to Arms says.

Comrade Brewing taps Honeyman XX IPA at noon. This is the twentieth in Comrade's R&D IPA series, hopped with Cascade, Centennial, Chinook and Denali hops. The brewery descibes the beer as having a "beautifully bright golden straw color. Intense citrus and orange with a pleasant floral quality. Crisp and dry finish with a nice smooth bitterness." 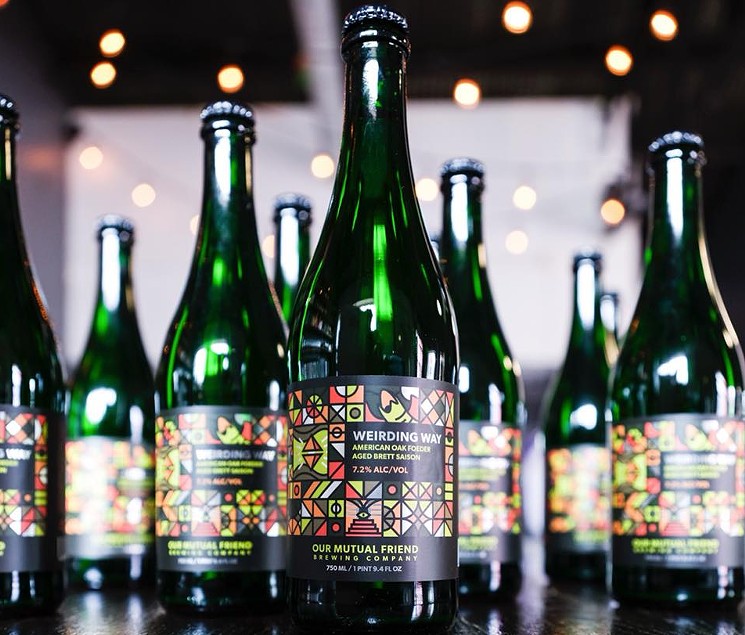 Our Mutual Friend hosts a bottle release for Weirding Way, a complex Brett saison that was primary-fermented in stainless and then aged in an American oak foeder for five months. The beer, a hit from last year, is available on draft and in 750ml bottles. Additionally, to celebrate winning a gold medal at the World Beer Cup for Saison Trystero, OMF will have limited bottles available of both that beer and Gratitude Four (pink guava saison) pulled from the cellar. Fixed Blade Barleywine and Oy will also be available while they last.

It's baaaaack! Dry Dock Brewing will tap another firkin of its controversial, ire-inducing, love-inducing glitter beer at noon at its North Dock taproom on Tower Road in Aurora. And this one twists the knife a little deeper since it was also made with Sour Patch Kids. Glitter Sour Patch Kid Ale won't last long.

Join Habitat Denver and more than thirty breweries at Great Divide Brewing's event space, 3403 Brighton Boulevard, for the 2018 edition of Hops for Homes, a craft-beer festival that "brings the collaborative spirit of the craft-brewery community together to craft a home and build hope for a local family in need." Tickets — $40 for GA and $50 for VIP — include unlimited pours, a specialty tasting glass, games, a live DJ and raffles. Food trucks include Basic Kneads Pizza, Farmer Joe's Food Truck and Catering, Mile High Cajun Food Truck and Trubucha. For tickets and a full list of participating breweries, go to habitatmetrodenver.org. The fest runs from 1 to 4 p.m. (VIPs get in at noon).

Bierstadt Lagerhaus will tap a single cask of its Helles lager taken directly from the tank as part of its Second Saturday Fasser series. In addition, the Rackhouse Pub, where Bierstadt is located, recently added three massive garage doors on its lower floor facing the back of the building.

Colorado Plus Brewpub will celebrate its fifth anniversary in Wheat Ridge. The brewpub will have more than 25 of its own beers on tap along with various other selections from Colorado craft breweries. They will be grilling out on the front patio, and there will be music and cornhole.

Odd13 Brewing in Lafayette will release two new canned beers at noon that will only be available in the taproom. The first is Codename: Ice Cream Man, a 6.5 percent ABV milkshake IPA "inspired by the ice cream truck favorite, The Creamsicle," the brewery says. It is the most "extreme variant" of Codename in terms of recipe modification; it was brewed with Centennial, Citra and El Dorado hops, along with lactose, vanilla and orange. The second beer is Hop Shaman, a collaboration with Further Brewing. "African Queen and Southern Passion dominate an insanely large dry hop aimed at a fruit-dominant profile," Odd13 says.

The third annual Bacon and Beer Classic is taking over Mile High Stadium from noon to 9 p.m. "Prepare yourself for a no-holds-barred blowout on the field with 100-plus beers from regional breweries, 30-plus bacon dishes from local chefs, a blind beer taste test, the Hormel bacon-eating contest, lawn games, music and more," organizers say. Get tickets and information at universe.com.

Frisco's Outer Range Brewing continues to attract people from all over the state with its world-class New England-style IPAs. At noon, the brewery will release fifty cases of Pillow Stacks DIPA, an 8 percent ABV IPA made with all Mosaic hops. It will also re-release its house beer, ORB IPA, made with Cascade, Amarillo, Nugget and Citra hops. There will be 100 cases available.

Black Shirt Brewing
Sunday, May 13
Black Shirt Brewing taps its annual Mother's Day beer, Red Beet Porter, at 11 a.m. It is designed to transport moms to "a place of relaxation and salvation — the garden," the brewery says. It was made with fresh beets and garnished with edible nasturtium flowers grown and harvested at the GrowHaus. "The beer is chocolatey, creamy, rounded, delicately earthy, and tastes pleasantly of the garden. The beet character is nuanced but noticeable, and the nasturtium flowers are spicy and crisp."

Resolute Brewing taps Mama’s Boy Kristal Weiss for its second annual Mother’s Day Crawfish Boil. Coming in at 5 percent ABV, Mama’s Boy "has all the banana and clove flavor we love in a Hefeweizen without the haze and a touch of bright citrus, courtesy of fresh lemon zest," the brewery says.

Monday, May 14
It's been a full year for the Intrepid Sojourner Beer Project, which will celebrate with a series of bomber bottle releases all week, leading up to a big bash on Saturday, May 19. Brewer and co-founder Andrew Moore kicks things off on Monday, May 14, at 7 p.m. with a presentation about brewing with adjuncts; he will also release  Imperial Turkish Coffee Stout in bottles (for details on all the bottles, go to the brewery's Facebook page). On Tuesday, it will be Peach Hickory Wee Heavy, which just won a medal at the World Beer Cup, followed by Imperial Basil IPA on Wednesday, Belgian Quad on Thursday and Imperial Sahti on Friday. A special flight of beers made on the brewery’s new pilot system, each with four infusions, will also be available nightly in the taproom: the Middle Eastern Saison (infused Monday with za’atar, ras el hanout, khmeli suneli, and advieh); the Carrot IPA (Tuesday, with ginger, Sichuan peppers, beets, cilantro and chiles); the Garlic Amber (Wednesday, with roasted, fermented, black and Creole garlic); a sour (Thursday, with blueberries, blackberries, raspberries and strawberries); and the Coffee Session Pale Ale (Friday, with Aztec cocoa, Robusta coffee, Arabica coffee and smoked coffee). And finally, the Saturday party will feature a band, the Barbed Wire Reef food truck, a firkin tapping, beer infusions and the launch of the Intrepid Sojourner Beer Club.

TRVE Brewing
Saturday, May 19
"Your summer’s about to get a hell of a lot more metal in it." That's the word from TRVE Brewing, which will begin selling its first canned beers from the taproom at noon. TRVE will release two beers. The first is Seven Doors, a grisette-style ale, fermented with French saison yeast and dry-hopped with Tettnang, Grungeist and Styrian Wolf. The second is Cosmic Crypt, a farmhouse pale ale, fermented with Belgian farmhouse yeast and dry-hopped with Mosaic and Mandarina Bavaria. Both were re-fermented in the can to improve mouthfeel and ensure the highest level of stability.

For the second year in a row, Jagged Mountain Craft Brewery will tap a beer dedicated to the late Mike Sadler, an All-American punter at Michigan State who died in a car accident in 2016. This time around, the beer is a 12 percent ABV Belgian tripel made with bananas, oranges and one hundred pounds of mini powdered doughnuts.
"Sadler’s Banana Hammock is a tribute to Mike as retold by his friends and teammates, who helped create this beer based on the fond stories they recall...like when Mike’s homebrew experiment resulted in a banana beer explosion in his closet....like how Mike ate very healthy…except for his consistent intake of powdered sugar donuts....like how Mike decided to do a photo shoot in a Speedo…and then filled a coach’s office with the salacious printouts," the brewery says. The beer will go on tap at 3 p.m., along with a new batch of last year's tribute beer, Hey Diddle Diddle, which commemorated Sadler's fake punt during the Rose Bowl.

The Hop Wars saga continues at 2 Penguins Tap & Grill with Hop Wars Strikes Back. Once again, the Centennial beer bar will pour five of Colorado’s best IPAs in "a battle for supremacy of your taste buds." Beers from Comrade, Eddyline, Little Machine and 4 Noses will face off against the returning champ, Juicy Banger from Station 26. Cast your vote once you’ve tried all five in a blind flight. "If you’re extra adventurous, try to guess all five breweries of your flight correctly for a special bonus prize," 2 Penguins says. Flights begin pouring at 3 p.m. as does voting. Turn in all votes by 6 p.m. and our victor shall be announced soon after.