bringatrailer.com
The 1975 Ford Bronco Denver Broncos Edition.
Want to let the world know you're the most passionate Denver Broncos fan ever? Now's your chance.

A cherry version of a 1975 Ford Bronco marketed as the "Denver Broncos Edition" is currently available at the online auto site Bring a Trailer. The auction ends in fewer than four days, and at this writing, six bidders have pushed the price to $44,999.

The text from the listing is below, along with a link to the original page. But here's a preview, as well as details about how this magnificent ride came to be.

According to a 2016 post on the Ford Trucks Enthusiasts website, the vehicle's origins can be traced to Bill Stroppe, described as an "off-road legend," who arranged with the automaker to create special-edition Broncos like the one he used in the Baja 1000 road race. The idea called for Ford to supply the cars to Stroppe, who would then modify them prior to delivery to dealerships across the country.

This pic proves there are Broncos enthusiasts throughout the region. Note the Kansas license plate.
bringatrailer.com
A couple hundred of the "Stroppe specials" had been built when the partnership ran out of gas. However, the article notes, 214 were already in the pipeline, and when the folks at Golden Ford found out about their availability, they purchased the whole batch.

After all, their predominantly orange color scheme already matched the uniforms of the gridiron Broncos, and Golden Ford personnel enhanced this connection by painting the roofs blue and slapping on a Broncos wheel cover.

The one currently on the bloc made its way to Ghent Ford in Fort Collins before being sent out into the world, and a couple of years ago, it was brought back to prime condition.

Not everything is original. Look no further than the affixed helmet, which has a logo that wasn't used until the late 1990s. 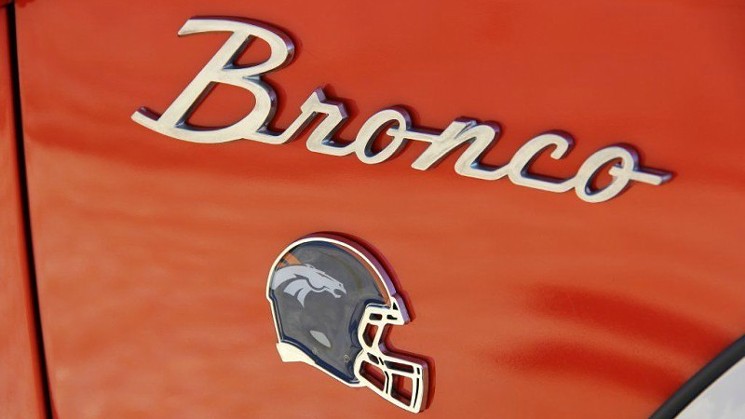 bringatrailer.com
However, the mileage is pretty low....

bringatrailer.com
...the paint gleams inside and out....

bringatrailer.com
...and a data plate affixed to the glove-box door attests to its authenticity.

bringatrailer.com
The auction will conclude at the oddly precise time of 3:50 p.m. on May 18. Here's a link to the original listing and excerpts from its text.

This 1975 Ford Bronco was sold new at Ghent Ford of Fort Collins, Colorado and was marketed as a Denver Broncos Special Edition. It is said to be one of just 76 Bronco Rangers equipped with the package and was treated to a cosmetic and mechanical refurbishment in 2016. Work included rebuilding the 302ci V8 and C4 automatic transmission with a mild cam, 4-barrel carburetor, and heavy duty shift kit. New upholstery was fitted and a repaint was performed in the original tri-tone shade following the installation of new fenders. Approximately 600 miles have been added by the current owner during his two years of ownership, and this Bronco is now being offered on dealer consignment with a clear Indiana title.

After the partnership between Ford and Bill Stroppe dissolved, the remaining stock of specially-painted Broncos were reportedly acquired by Golden Ford. Components added by the dealership included white fender flares, a Grabber Blue roof, and a Denver Broncos spare tire cover.

This example reportedly underwent a body-off repaint in its original paint scheme in 2016, and the finish is said to be of high quality per the seller. The driver’s door was replaced at this time, and new old stock fenders were installed along with window and door rubber. 15” Cragar wheels wear chrome caps and Cooper Discoverer A/T tires, and the truck is equipped with power steering.

The seats were reupholstered in white vinyl, and the front buckets are equipped with lap belts. New blue carpeting was installed and a roll bar has been added. The white-painted dash houses a modern JVC head unit. 43,479 miles are shown on the five-digit odometer, approximately 600 of which were added under current ownership.

The 302ci V8 is paired with a C4 3-speed automatic transmission and a dual-range transfer case. The engine was rebuilt in 2016 with a mild cam and 4-barrel carburetor, and the transmission was rebuilt at the same time with a heavy duty shift kit.