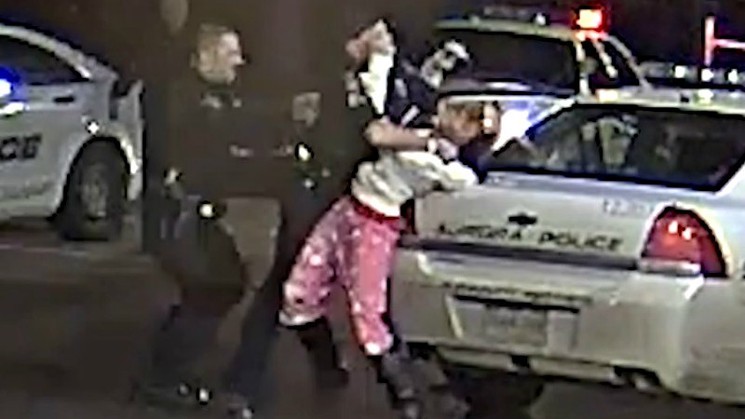 Courtesy of Frank & Salahuddin LLC
The City of Aurora has agreed to pony up $335,000 to settle a lawsuit filed against three members of the Aurora Police Department by OyZhana Williams over a 2015 incident during which she was roughed up and had her head stomped in the parking lot of a hospital where her boyfriend was being treated for a gunshot wound, apparently because a cop lauded for heroism during the aftermath of the Aurora theater shooting didn't like the way she dropped her keys.

The violent exchange was captured on a video that's on view below, and Adam Frank, Williams's attorney, believes it was the key to justice for his client.

"If it wasn't for the video, Ms. Williams would have had the stark and horrific choice of either taking the risk of going to trial and accusing three sworn police officers of lying or taking a plea bargain admitting to something she didn't do," Frank says. "And this horrible choice is one people face all the time when they are assaulted by the police."

The City of Aurora is neither apologizing for what happened nor admitting any malfeasance on the part of the suit's targets, Sergeant Michael Hawkins and officers Jordan Odneal and Jose Ortiz. A statement attributed to Aurora City Attorney Mike Hyman reads: "The city has entered into a settlement agreement with Ms. Williams on this matter. As part of that agreement, the city did not admit liability in this case. This case was settled for the reason that many cases are settled — to avoid the cost of prolonged litigation. That cost would have far exceeded the value of the settlement."

In Frank's view, though, the cash carries a clear message. "I've never heard of anyone paying $335,000 because they did nothing wrong," he stresses. The city's statement "is the kind of thing defendants say, and it's unfortunate that they say it. But I think any reasonable person knows you don't pay a third of a million dollars unless you did something wrong."

Although this assertion has yet to be confirmed by the Aurora Police Department, Frank notes that an internal-affairs investigation into the actions of Odneal and Ortiz is ongoing. As for Hawkins, who was credited with trying in vain to save the life of six-year-old Veronica Moser-Sullivan after spiriting her out of the Aurora Century 16 following the July 2012 attack at the theater, he has retired from the force. 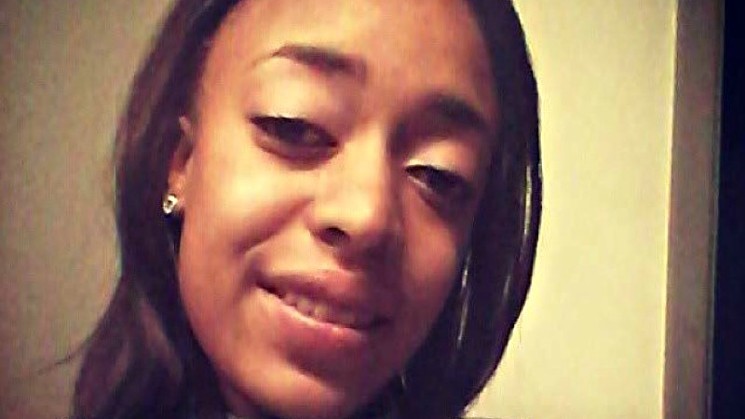 Courtesy of Frank & Salahuddin LLC
The original lawsuit outlines the series of events that began unspooling during the early-morning hours of December 22, 2015, when Blake Newton, Williams's significant other, was shot.

Williams was terrified, the suit notes, as she raced Newton to the UC Health emergency room, located at 15300 East Mississippi Avenue.

Upon his arrival at the facility alongside Odneal and Ortiz, Hawkins spoke to Williams for around five minutes, after which he told her that the car in which she transported Newton would have to be towed "so it could be searched and examined," the narrative maintains. Williams responded by walking with Hawkins to the vehicle and allowing him to "search it without interference."

The pair returned to the emergency-room lobby at around 3:50 a.m. on the 22nd. Williams then accompanied Newton's gurney as it was being wheeled to an ambulance for transfer to the main UC Health hospital, where he would receive further care.

Williams and Hawkins subsequently got into what the lawsuit describes as a "verbal disagreement" that escalated a few minutes later when the sergeant asked for the keys to the car. The suit states that Hawkins "had no legal right" to make this request.

The video of the exchange has no sound, but it's clear that the conversation between Hawkins and Williams was heated. In the clip, the sergeant can be seen pointing his finger in Williams's face before she raises her keys and theatrically drops them to the ground.


Hawkins doesn't seem to have liked this gesture much, since the video shows him grabbing at Williams, dragging her from the back seat of a police cruiser, into which she'd retreated, and bending her over the vehicle's trunk as he allegedly "choked her with his forearm," the text allows. Next, Hawkins tried to "throw Ms. Williams on the ground by her neck," getting an assist from Odneal, who "tackled Ms. Williams over Sgt. Hawkins's extended leg."

The latter move "drove Ms. Williams's head into the pavement," the suit goes on. At that point, Ortiz and another, unnamed officer joined in, essentially piling on Williams while handcuffing her. As for Hawkins, the suit says he "walked to where Ms. Williams's head was pinned to the ground, lifted his left leg and stomped on Ms. Williams's head while she was laying on the pavement." According to the suit, the impact of Hawkins's foot caused facial bruising, days' worth of ringing in her ears and migraines that recurred for months.

This wasn't the end of Williams's ordeal. Based on what the lawsuit characterizes as "numerous false and/or deliberately misleading statements" in police reports submitted by APD personnel, she was arrested on suspicion of assaulting the cops, and thanks to a $50,000 bond placed on her, she spent Christmas in jail. The bond was lowered on December 28, but prosecution for second-degree assault on a police officer continued until November 4, 2016, when the matter was finally dropped. But during the intervening period, Williams lost her job because of the false charge and wasn't able to get a new one until after the case's dismissal. 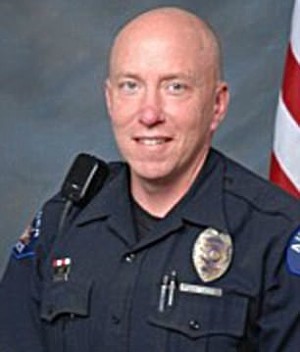 Now-retired APD Sergeant Michael Hawkins.
Aurora Police Department
Today, Frank says, Williams "is very happy with the settlement. She wants to move forward, move on with her life. But she also feels this settlement conveys the seriousness of what happened to her and what was done to her."

He puts a particular emphasis on the inaccurate police reports. "Sergeant Hawkins and officers Odneal and Ortiz all wrote about what happened in ways that made it look like Ms. Williams was the aggressor and that she was guilty of second-degree assault on a peace officer, a crime that, at the time, would have mandated a sentence of four to twelve years."

He adds that "every single time the police assault someone, they get together, get their story straight and then swear up and down that the assault was necessary and was caused by the other person — and that they were justified."

While the dollars-and-cents part of the proceedings is over, Frank stresses that he'll continue to monitor the fates of Odneal and Ortiz.

"We will be using the Colorado open-records laws to request a copy of the final internal-affairs report," he says, "because from our perspective, these officers wrote reports they knew were not true, and that is something we cannot accept from our police officers. We give a massive amount of power to the police: They have the authority to arrest someone, start criminal proceedings and potentially ruin that person's life. And because of that, police officers must be held to the highest standard when it comes to truthfulness."

In his view, "when police officers assault people and then lie about it, that rightfully erodes the trust the community can have in law enforcement. So I think this settlement is a good step in Aurora taking responsibility and compensating Ms. Williams."