Curtis Tucker
“Monumental,” by Trine Bumiller, oil on panels.
On November 8, 2016, just about everyone — other than Vladimir Putin — was surprised to learn that Donald J. Trump had been elected president. Although Trump lost the popular vote by millions, he was able to eke out a victory in the electoral college, again surprising everyone but Putin. In such liberal bastions as Denver and Boulder, where Trump votes were swamped by the tallies for Hillary Clinton, the first serious woman candidate for U.S. president, the news was particularly hard to swallow. And across the country, Clinton’s loss to the patron saint of pussy-grabbers inspired women to take to the streets, where they marched in protest during the weekend of his inauguration.

Colorado artist Anna Kaye was inspired to mount shows demonstrating solidarity with those marchers. The culmination of her efforts is Pink Progression at Metro State’s Center for Visual Art, which is a followup to two prequels — one at the Boulder Public Library that closed in March, and another at the Central Denver Public Library, which runs through June 29. The pieces at the CVA are unique to this rendition, however, and many of the works were created specifically for it.

I walked through the show with CVA director and curator Cecily Cullen, who explained that while she and Kaye are credited as curators, the show wasn’t actually curated in the traditional sense. Instead of specific pieces being selected for display, the lineup was generated more or less organically after Kaye invited some artists to participate and those invitees in turn asked others; each artist ultimately contributed what they felt was appropriate. (As with the marches themselves, the majority of the participants are women, though men are also represented.) Dealing with the inevitable free-associational quality of the submissions, Cullen used her expertise in exhibition design to give shape to the shapeless mass. Beyond her own skills, she had two other things in her corner: Since the roster comprises a veritable who’s who of women artists active in the area, the pieces are invariably well done; and a lot of the artists used the color pink, a good unifying tool. And while there are some political pieces, the show does not read like a critique of Trump, filled with unflattering caricatures. Instead, it’s simply a celebration of talented (mostly) women artists showing the kind of work they usually do — or, in a few cases, going in unexpected new directions. 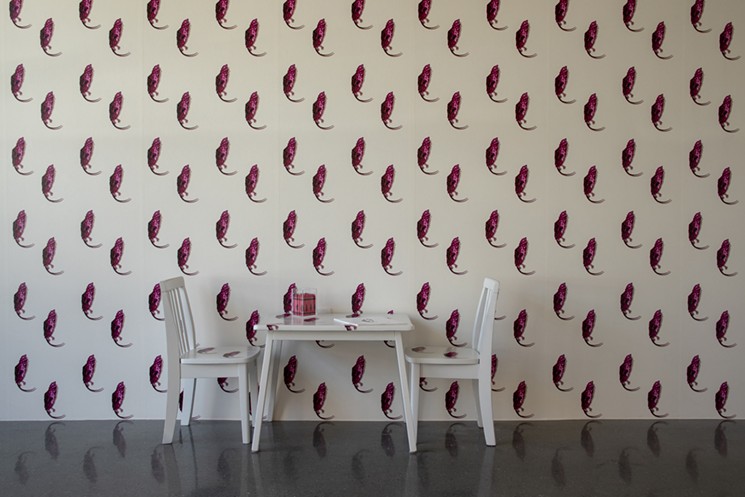 "Domesticated Rat," by Rachael Delaney and Sandy Lane, installation.
Curtis Tucker
Even the political works are more metaphorical than strident. Among the standouts in this category is “Domesticated Rat,” an installation by Rachael Delaney and Sandy Lane. At first it looks like a cheerful room, with a table and a couple of chairs set against a pair of walls covered in kitchen-y wallpaper. But then you notice that the pattern on the wallpaper is the repeated image of a dead rat; an actual dead rat is also present, entombed in a little see-through Plexi sarcophagus. The piece is riveting, if stomach-churning. The political content is more obvious in “The Couch Project,” for which artist Frankie Toan has created knitted renditions of slogans, including (though not limited to) anti-LGBT epithets. Taking the form of signs, the knitted words are set against colored grounds with contrasting borders, kind of like merit badges, with the various parts then casually joined together in an engaging display. 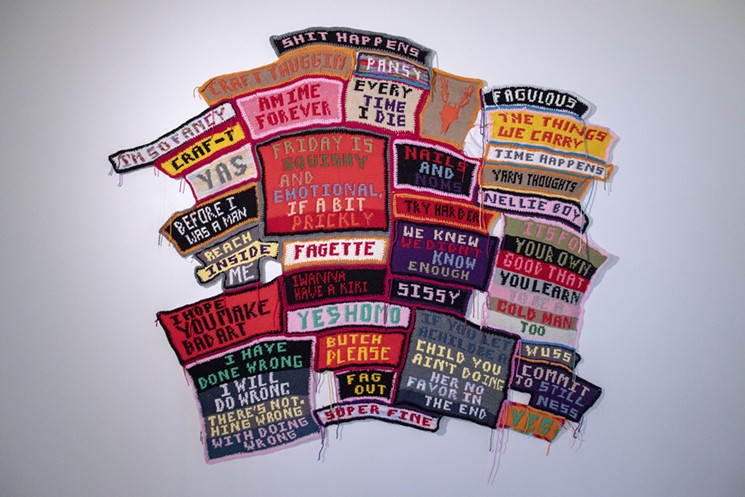 "The Couch Project," by Frankie Toan, knitted yarn.
Curtis Tucker
Fibers have long been associated with women’s art, and knitting isn’t the only example here. For “Agglomerate 3,” Viviane Le Courtois assembled a phallic pile of stitched-together stuffed shapes, some of which are themselves phallic, done in a range of colors dominated by various shades of pink. Jennifer Pettus created a couple of wearable soft sculptures, one of which includes a reference to a flaccid dildo — but while it’s fairly provocative once you notice it, the dildo’s inclusion in the piece is pretty subtle. Less confrontational and more conciliatory is Steven Frost’s “We’re Strangers Until We’re Not,” a woven scarf with pulled and added yarn. Ana Maria Hernando also uses fibers but takes a more conceptual approach: Starting with nine circles of organza made for her by cloistered nuns, she tinted them pink with colored pencils, then set each against its own sheet of white paper. These have been hung as a three-by-three grid, and the result is ethereal.

"The Middle Landscape," by Katie Caron, Styrofoam and rubber.
Curtis Tucker
Hernando, Le Courtois, Pettus and arguably even Frost are all embracing abstraction in some way, and abstraction emerges as a major theme throughout the show. The graphics-like symbols in four screen-printed monochromes by Chinn Wang echo the iconic aspects of Hernando’s organza circles. Ania Gola-Kumor is represented by a gorgeous example of her classic abstraction, in which she has used arching dashes of pink, a new shade for her. Also stunning is Julia Rymer Brucker’s “Light at Saint James,” a brushy and breathless update of abstract expressionism. The Brucker hangs next to an atmospheric Tonia Bonnell, “Accumulate (in pink),” done in stippled colored pencil on nearly transparent vellum, and the two pieces really resonate with one another. Though Sue Simon’s multi-part painting includes her signature combination of abstract fields and scientific notations, I didn’t recognize it as her work at first because she’s pushed the painted parts and made the scientific references less pronounced. I really like this new direction. 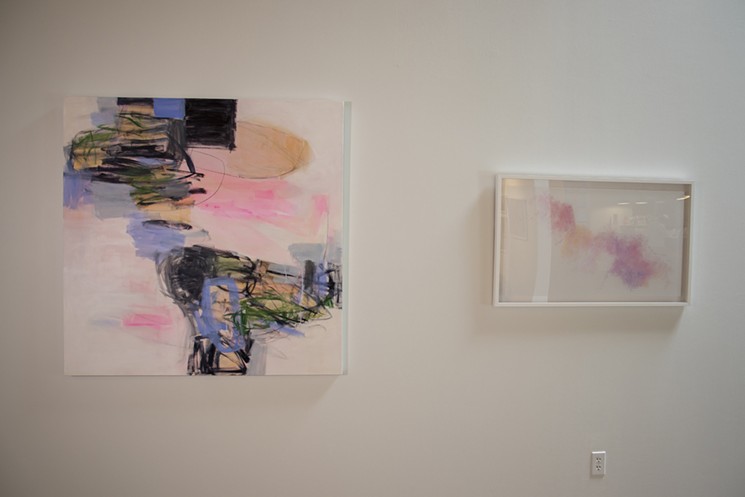 "Light at Saint James" (left), by Julia Rymer Brucker; "Accumulate (in pink)" (right), Tonia Bonnell.
Curtis Tucker
Also working against type is Trine Bumiller, even though “Monumental,” which comprises 128 small oil-on-panel paintings, relates conceptually to an earlier project based on Rocky Mountain National Park. But these new paintings of monuments across the country are more literal than the park paintings, each one anchored by a depiction of a structure. Moreover, while conventionalized and thereby simplified, they are not abstracted, unlike her park paintings and the vast majority of her oeuvre. Though Pink Progression has a number of strong moments and passages, “Monumental” is a genuine showstopper.

Other artists who deserve a shout-out for their contributions include Katie Caron, who has built a fantasy forest of tree sculptures; Mark Penner-Howell, whose hyperrealist work depicts a little girl and a guitar; Irene Delka McCray, whose “Father” is a fanatically accurate rendering of wrinkled sheets marked by the imprint of a body; and Jennifer Ghormley, who contributes ghostly compositions in woodblock, screen-print and thread.

Unlike many politically inspired exhibits filled with “message” art that’s long on message and short on art, Pink Progression is a must-see show, full of first-rate pieces by some of the area’s top talent.