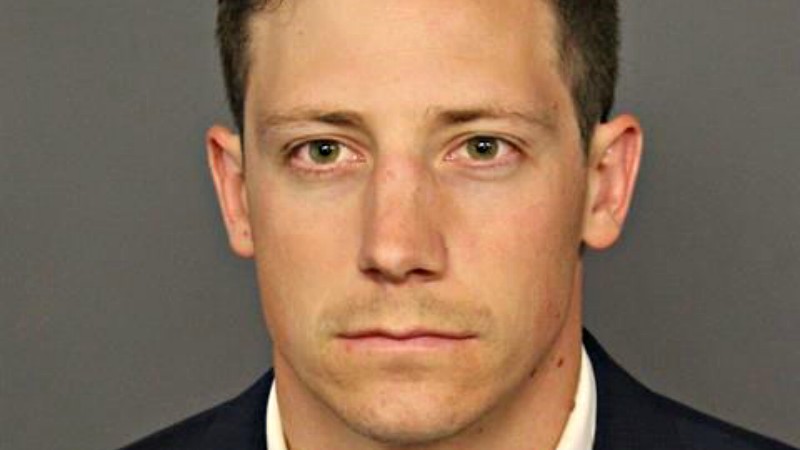 Denver Police Department
Chase Bishop's booking photo.
FBI agent Chase Bishop, who became a national laughingstock after he accidentally shot Thomas Reddington while executing a backflip at Mile High Spirits Distillery during the wee hours of June 2, turned himself in to the Denver Sheriff's Department on June 12. He was promptly arrested and held on suspicion of second-degree assault, the offense for which he's now been charged by the Denver District Attorney's Office.

Why did so much time pass before Bishop got his chance to pose for a mug shot?

In the immediate aftermath of the incident, Bishop was released into the custody of an FBI supervisor.

Shortly thereafter, a video of Bishop's questionable moves went viral, providing plenty of opportunities for mirth to the likes of The Daily Show's Trevor Noah, whose hilarious take can be seen here.


In the days that followed, Reddington — represented by local attorney Frank Azar, who thus far hasn't replied to multiple interview requests from Westword — told his story on Good Morning America, which promoted the get with only slightly less fervor than it's been pimping coverage of the Donald Trump-Kim Jong-un micro-summit.

Bishop, however, remained out of view. But now, a full ten days after his bullet gave Reddington a nasty surprise, he's been jailed.

Why the delay? Was it because of reluctance by the FBI to part with their dancing dervish? Did authorities in Denver have to negotiate with the feds to get their hands on him?

Not according to Denver Police Department spokesman Sonny Jackson, who says the reasons for the passage of a week-plus were benign. In his words, "I think there was some additional investigating that needed to be done."

The detective work may not be over. In its release about the Bishop beef, the DA's office notes that an additional charge or charges may be filed based on a pending blood-alcohol-content analysis that "has not yet been received."

In a statement, Denver District Attorney Beth McCann points out that "we are filing this charge now rather than waiting until the BAC report is received, which we understand could take another week, because sufficient evidence has been presented to file it."

The next chance to get a look at Bishop will come tomorrow, June 13, at 8:30 a.m., when he'll appear in courtroom 2300 of the Van Cise-Simonet Detention Center for a second advisement.

Expect his moves to be watched closely.

Update: This post was updated at 3 p.m. June 12 to include information about charges against Chase Bishop filed by the Denver District Attorney's Office.