Hello: The Book of Mormon Meets a Grocery Store Racist

Julieta Cervantes
Conner Peirson in The Book of Mormon.
Horrible race relations can be hilarious.

That’s the premise of the brilliantly scripted and performed The Book of Mormon, which is back at the Ellie through July 7, for the musical's fourth Denver run. The play is indeed hilarious — at least to a room full of mostly white people who can afford the tickets and chortling about AIDS, genocide in Uganda, domestic violence, homophobia, female circumcision, baby fucking and the inability of those same white Americans to pronounce African names, even of those they love.

Like so much of what the Colorado-born South Park creative duo of Matt Stone and Trey Parker, who wrote the musical with Robert Lopez, has produced, The Book of Mormon is razor-sharp satire gussied up with dick jokes galore. It’s that generally tired genre of “comedy with something to offend everyone" that people in power peddle, but in this case, it’s actually well executed and elevated into first-rate theater.

The songs are addicting (“Hello,” the opening number, is still running through my head). The parody of Mormonism — which is really a stand-in for do-gooder white colonizers of all stripes who are friendly, deceitful and deadly — is thought-provoking. And the acting and dancing, particularly that of Conner Peirson, who plays Elder Cunningham, is world-class.

After I left the show at the Denver Performing Arts Complex on June 14 and headed a few blocks down Speer Boulevard to pick up dog food, I suddenly found myself facing real-life theater as a white customer accosted a black security guard in the parking lot.  "It's just another night at King Soopers," said one employee.

But “nigger”? Even the musical didn't go there. 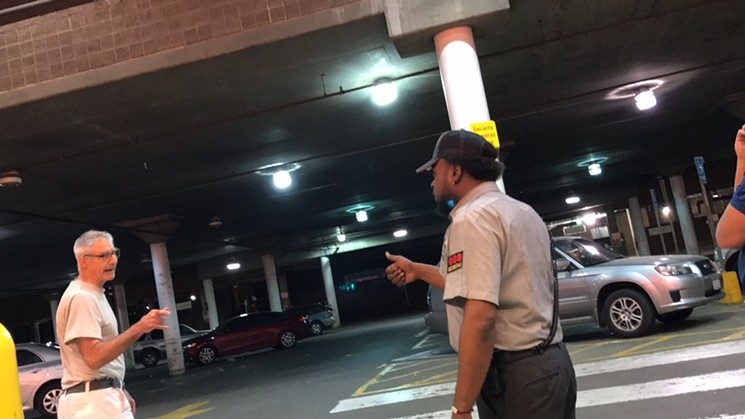 A painful interaction between a man and a security guard.
Kyle Harris
That’s what the white guy called the guard — several times. He also hit the guard twice. And then he wondered why he wasn’t welcome in the store. Manifest Destiny plus the First Amendment, baby: Go wherever you want and say whatever you want, because that’s the American way.

Finally the guard persuaded the racist — who was threatening to “call the manager,” because white men nearly always assume managers are on their side — to go away. And I went on with my shopping. Scenes from The Book of Mormon kept popping into my mind, but the bitter taste of racism in action was there, too. The great myth of race that is the bedrock of white supremacy — fodder for The Book of Mormon — hadn't seemed as funny in the King Soopers parking lot. The Book of Mormon
Julieta Cervantes
There’s a scene in The Book of Mormon that parodies that most awful of tropes exemplified in The Lion King when suffering Africans (animals, in Disney’s case) sing and grin away the pain. Think “Hakuna Matata” — only in this case, the phrase is “Hasa Diga Eebowai,” which, if you’re to believe the script, means “Fuck you, God.”

That number is contrasted with the Mormon answer to existential problems — the theme of another Book of Mormon song, “Turn It Off”: Don’t just bottle up your feelings — shut ’em off like a light switch.

Both are terrifyingly funny songs. Along with the rest of the musical, they raise a critical question about suffering in this world: How do we respond to horrible things? Ignore them? Curse God? Take action? Who knows?

That’s the question I was left with at the end of the night. I remembered laughing during the show. But I just couldn't remember why.