The New Sicario Is Violent, Moving and Implausible, But Less So Than Real Life 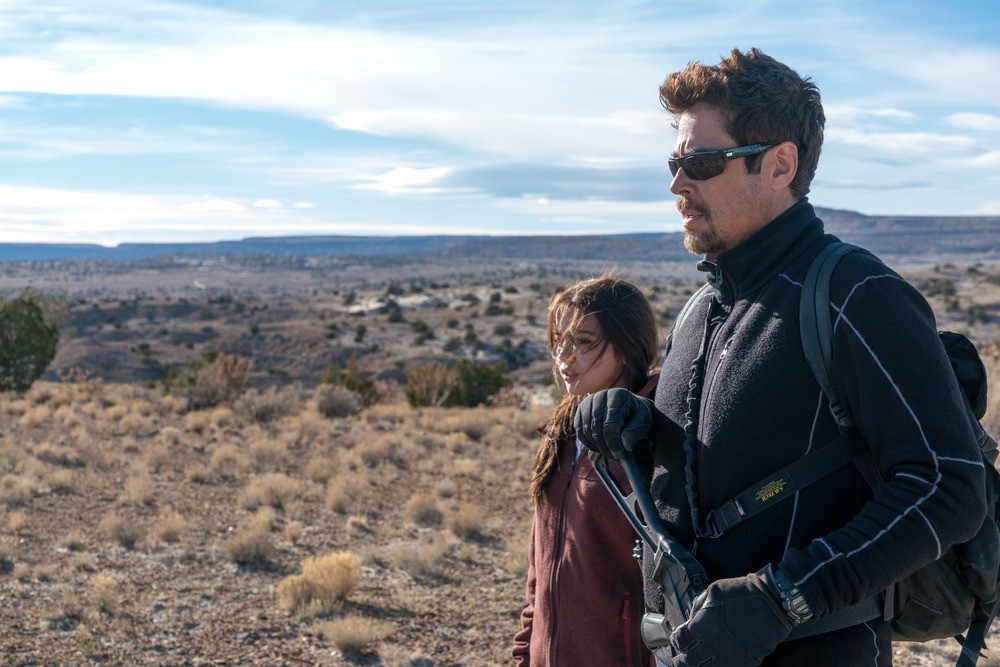 Richard Foreman Jr./Courtesy of Sony Pictures
Rogue recruit Alejandro (Benicio Del Toro, right) kidnaps sixteen-year-old Isabel Reyes (Isabela Moner), but the two somehow manage to form a mutual respect in the Mexican desert during Stefano Sollima’s Sicario: Day of the Soldado.
The release of Stefano Sollima’s Sicario: Day of the Soldado will forever be intertwined with the real-life travesties taking place in one of the film’s locations: McAllen, Texas. There’s no way Sollima or writer Taylor Sheridan could have foreseen exactly the scenario unfolding in Texas the week before the film’s release: What once seemed just a small border town filled with regular folks now harbors hundreds of immigrant children stripped from their parents and caged like animals in overcrowded facilities. Meanwhile, torrential rains flood the streets and Melania Trump visits in the most offensive jacket of all time, bidding those children a pitiful “good luck” as she boards her plane to eat another plate of diamonds. But this film, about the U.S. government’s attempt to kidnap a cartel king’s daughter and stage a war in Mexico, must compete with real life.

This ultra-violent crime thriller, satirizing some of Americans’ most despicable, imperialist impulses, somehow seems as though it is from a quieter, more decent time — and that’s depressing. Because nothing the Americans do here is good or kind or right in its sensationalized yet still morally accurate portrayal of the wars we wage — the wars we have always waged. But, hey, there are some sick one-liners, and somewhere in the convoluted plot is a heart-pumping chiller of a story with no easy heroes.

The plot kicks off with an ISIS fighter getting caught trying to enter the country through the Mexican border with a group of immigrants. Then other ISIS fighters suicide bomb an American store. It’s been a while since I’ve really considered ISIS a threat on U.S. soil, but Sicario seems to be tapping into people’s collective fears circa 2015, presumably when this script went into development. The bombing prompts the secretary of defense (Matthew Modine) to bring elite DOJ special task force shit-starter Matt Graver (Josh Brolin) back home from his duties of torturing African Muslims for information. His mission: starting a war between the cartels. At first this plan somehow has something to do with securing our borders from ISIS invaders, but that storyline abruptly drops off, probably because it makes very little sense. After all, it’s actually white American men who carry out the vast majority of domestic attacks.

The story’s real focus turns out to be Graver’s rogue recruit Alejandro (Benicio Del Toro), promised by Graver a chance for revenge against those who killed his family, which also was his motivator from the last film, unless he got and lost a new wife and daughter in the interim. Either way, Alejandro is in, expertly kidnapping 16-year-old Isabel Reyes (Isabela Moner) from the fancy security detail that is transporting her from school to her mansion. Alejandro and the Americans set up an elaborate “rescue” situation, making Isabel think that they’re the good guys who just stumbled into this cartel war, but she’s a little too observant to buy it. There’s some double-crossing, an ambush, and the team gets split up — Alejandro with Isabel in the Mexican desert, and Graver and his crew safely back on American land.

Alejandro and Isabel’s scenes are the best thing in the movie. The two survivors don’t necessarily bond, but a kind of mutual respect forms between them. Early on, we get a glimpse of Isabel beating the shit out of another girl who slapped her and called her a “Narco whore.” Sheridan has often wrung sardonic laughs out of terrible situations in his scripts; here the sharpest line also is poignant. As Alejandro buries his guns in the desert in preparation for their attempt to cross the border on foot, Isabel says she recognizes Alejandro as a lawyer whose family “they” killed. They. She’s vague, distant from the truth of it. Alejandro corrects her: “Not ‘they.’ ” At that moment, she seems to recognize her complicity in her father’s business, even as just a child, and that the luxury she’s enjoyed is at the expense of people like Alejandro.

Later, as they try to cross into the states, Isabel seems in awe of how many hopeful people are ready to board a bus with strangers in the dead of night. Alejandro could retort, “Yeah, all these people are trying to escape this place because your father is making their lives a living hell.” But he doesn’t. He says, instead, “That’s how it is.” Alejandro and Isabel’s scenes have the least of this sequel’s dialogue — at one point, Alejandro is speaking purely in sign language — and yet their impact on the story is the greatest. Del Toro and Moner say everything that’s needed with pained, bewildered eyes.

Meanwhile, Graver speaks with relentless American cynicism. He is both funny and unnerving, and maybe more unnerving because he’s being funny, even as he orders drones to pinpoint and obliterate an enemy. Of course, viewers demand from this kind of geopolitical thriller some basic plausibility, and I fear that Graver’s story edges too deeply into fantasy. His superior Cynthia Foards (Catherine Keener) chews him out for murdering a bunch of Mexican federal officers. POTUS is infuriated, Foards tells him, because the public is outraged and Fox News is playing footage of the dead Mexicans 24/7. Do I even have to say how surreal it is to think there might be a world where Fox might care about dead brown people?