A Visit to Banhez Clears the Smoke Around Mezcal

Laura Shunk
Flavors vary widely across Francisco Perez's Bahnez mezcals.
As a gray mist settles over cactus-dotted hills near the small Oaxacan village of Santa Maria de Ejutla, a group of men stand around a twenty-foot-wide fire pit, watching smoke curl. Soon they decide the coals are hot enough, and they begin hoisting duffel bag-sized halves of agave piñas, which look a bit like gigantic pineapples, onto the pit.

The guys work methodically, occasionally using an ax to split apart a larger piña, and the mound grows until it’s almost as tall as the pit is wide. Once every agave heart is on the fire, the team covers the mountain with dirt and stakes a cross fashioned from sticks at the apex.

This is the start of the mezcal-distilling process at Banhez, a village mezcal co-op — and this step is the reason the spirit is known for its smoky flavor. The piñas will cook covered for three days before they’re mashed with what is essentially a massive stone mortar and pestle, and then the juice will go into Banhez’s copper still.

Today the co-op is working along a batch of espadín and barril, the two different agave plants in their baseline spirit. (Espadín, which is easily cultivated, forms the base of many mezcals made in this region.) But Francisco Perez, who launched Banhez more than a decade ago to bring economic opportunity to his home village, explains that his company’s mezcals are made from a number of varieties of agave, many of them wild. And while each is ultimately labeled mezcal, the flavor profiles vary dramatically.

The Bahnez team waits for the fire to reach the right temperature and then adds the piñas.
Laura Shunk
We tend to miss that nuance here in the States. Much of mezcal’s popularity in America seems to have been built on smoke — read just about any story on the spirit, and you’ll notice that “smoky” is the only tasting note assigned. And without question, that branding has aided its rise: Mezcal is pitched to Scotch fiends as a Latin American alternative and to tequila fanatics as a huskier agave spirit. When it’s mixed into traditional tequila cocktails, it’s often beefed up with complementary ingredients that call forth more of the smoke. And that’s a self-reinforcing property: Bottles on back bars tend to be the smokiest examples on the market, because that’s what most American mezcal drinkers have been conditioned to covet.

The smoky characterization is not wholly inaccurate: All piñas take on some of the fire during their roast. (That’s a direct contrast to tequila, for which blue agaves are cooked in a smoke-free autoclave.) But it takes just a couple of ounce-sized tasters in a mezcaleria to understand that that’s a one-dimensional view of this spirit. With well-made mezcals, the smoke is just one note of a complex flavor profile — and sometimes it fades into the background entirely, overridden by fruit, funk or spice. Mezcal is more varied even than different types of whiskeys, and just as pleasurable to sip neat, perhaps supplemented by a wedge of orange sprinkled with sal de gusano, a salt sown with chile and ground-up gusanos — worms. 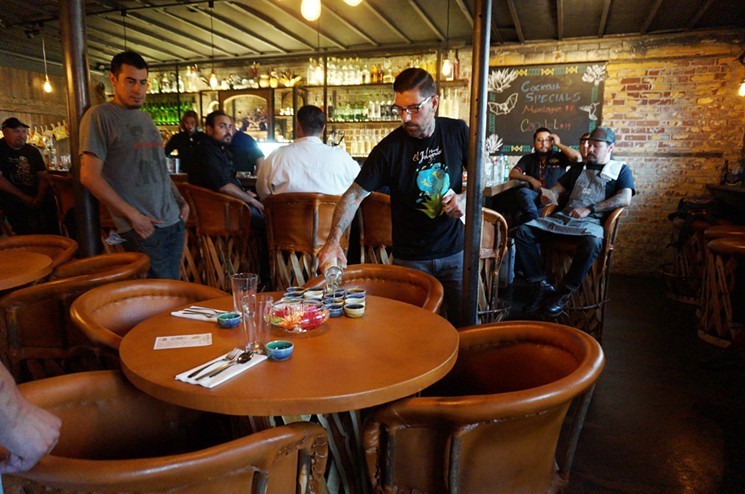 Brian Rossi at Palenque.
Mark Antonation
The best place in Denver to learn more about this liquid asset is Palenque, the South Broadway mezcal bar from Adelitas owner Brian Rossi that features dozens of artisanal varieties of the spirit, with Oaxacan snacks to match. Rossi built Palenque to channel the educational experience of Oaxacan mezcalerias, where patient bartenders serve each pour with a story, tasting notes and comparative observations.

While the bartenders at Palenque are eager to share knowledge in a similar way, you’re just as likely to find most patrons drinking mezcal cocktails rather than the spirits, perhaps because the pours here are not particularly cheap. (If you’re on a budget, consider sipping on a Monday night, when all mezcals are half-priced.) Wait for a bar seat if you want the tasting experience, and ask for the mezcal menu. That’ll cue a conversation about your preferences — with staffers more than happy to walk you through a progressive tasting of varietals and producers.

Some producers on this list characterize their spirits by the village in which they’re made, while others are labeled like tequila — jóven, reposado, añejo. But the vast majority are categorized by the agave from which they’re derived, like cuixe, arroqueño and tobalá. The latter seems like a popular place to start; when I said I particularly liked this round, fruity varietal that comes from a wild plant, my bartender said, “Yeah, everyone really likes tobalá.” My informal survey of Mexican mezcal drinkers, by contrast, suggests the most popular version in Oaxaca is the pechuga, named for the turkey or chicken breast that goes into the still with the agave. You can try different versions of that at Palenque, too.

You can also taste Banhez’s baseline spirit at Palenque, or sip its herbaceous tepextate, made from a rare wild agave that takes 25 years to mature. And you could soon have more options.

At Banhez, Perez Cruz tells me he’s working on bringing more of the fourteen varietals he distills to the States. We break into those after the men finish building their agave mountain, pausing first for a silent blessing for a good batch. When I later revisit the tepextate at Palenque, I raise a cup to offer a silent salute of my own: to the fire, the families and the intrepid explorers so desperate for a drink that they figured out how to crack open an unfriendly cactus and distill the sap.