Family photo via People
A family photo of Jordan Vong.
The Denver District Attorney's Office has announced that it will file murder and child-abuse charges against the sixteen-year-old aunt of Jordan Vong, a seven-year-old killed in Montbello last week. Moreover, the teen will be charged as an adult.

Prosecutors have not yet released the name of the suspect, and the Denver coroner's office notes that Vong's cause of death remains under investigation.

However, the DA's office reveals that Vong's body was found in his home, located on the 4900 block of Fairplay Street, wrapped in a blanket and hidden in a portable closet in the suspect's basement bedroom.

Prior to the latest announcement, the lion's share of information about the homicide was shared during an August 8 press conference by Denver Police Department Division Chief Joe Montoya, whose tone was appropriately somber.

At one point, he said, "Once this came to the sad conclusion that it did, the emotional drain is very intense. I felt it myself, and I know that the investigators themselves felt it."

Montoya added that "the roller-coaster ride you go through in a 48-hour span of an investigation, especially involving a child, is eye-opening. It really is."

According to Montoya, the inquiry was sparked by a call to the DPD communication center at around 4:30 p.m. on Monday, August 6, from one of Vong's family members. 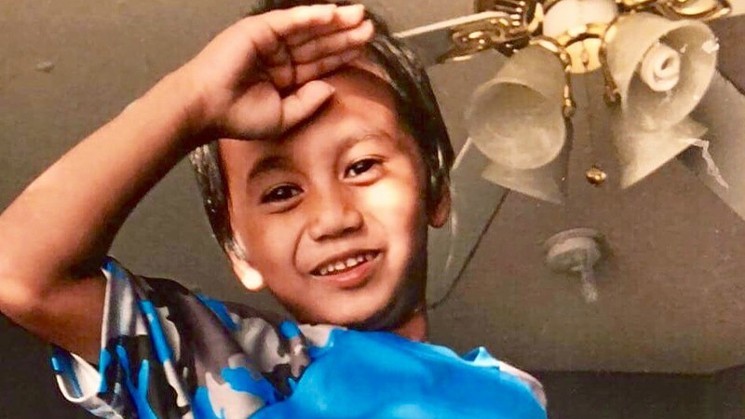 Another portrait of the late Jordan Vong.
Family photo via People
That individual said that Vong was missing and had last been seen at around 2:40 p.m. that day.

Officers arrived at the scene within fifteen minutes and conducted what Montoya characterized as a "cursory search" of the home in an effort to rule out that Vong was hiding or playing some kind of game.

The investigation continued on Tuesday, August 7, and over the course of the day, Montoya revealed that detectives felt "a more thorough search of the residence was necessary." To that end, the DPD obtained a search warrant. Officers entered the home at 8:20 p.m. and found Jordan deceased approximately thirty minutes later.

More evidence was collected overnight, and the following morning, August 8, the sixteen-year-old female was taken into custody on suspicion of first-degree murder.

The formal charges against the suspect are murder in the first degree after deliberation and one count of child abuse resulting in death. Her first appearance in district court has yet to be scheduled.