Ex-Denver for Trump Head: We'll Recall Any Republican Disloyal to the President

File photo
Loyalty to President Donald Trump is paramount in the view of one former Colorado gubernatorial candidate.
Steve Barlock, who led Donald Trump's 2016 campaign in Denver, wants Treasurer Walker Stapleton to become Colorado's next governor, a position for which Barlock made a run earlier this year. But should Stapleton subsequently prove insufficiently loyal to Trump, Barlock promises that he and others in the president's corner will take swift and decisive action.

"We will vote for Walker Stapleton," he says. "But after he's elected, if he turns on my president, I'll be the first person to lead the recall."

Stapleton is hardly the only person who could be treated this way. Barlock wants Republicans to win every political race this November in Colorado and beyond — but those who taint their victory by turning into what he derisively refers to as "Never Trumpers" should expect to be recalled, too.

This warning was prompted by a Facebook post shared this week by another onetime GOP gubernatorial hopeful, Victor Mitchell, whose other fiery comments about the primary election earlier this year we shared yesterday in this space. "Given the convictions and guilty pleas yesterday," he wrote on August 22 in reference to onetime Trump associates Paul Manafort and Michael Cohen, "it's time for all Republicans to come together and call on President Trump to resign. Congress should also immediately commence impeachment." 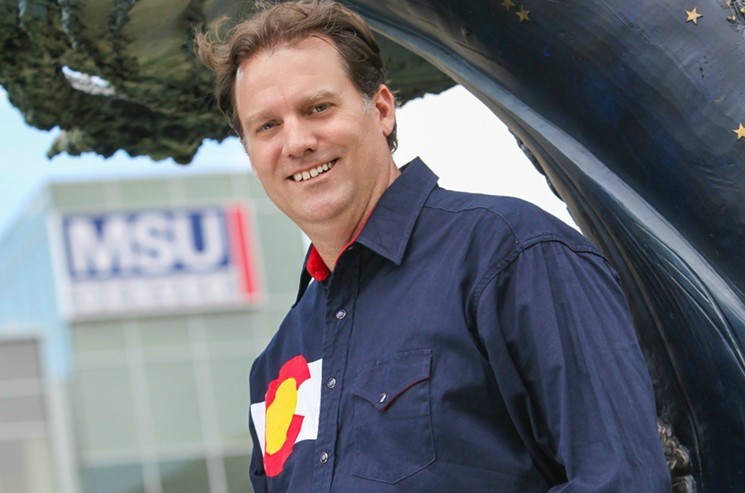 Steve Barlock led Donald Trump's 2016 campaign in Denver.
File photo
This statement prompted hundreds of comments, most from Trump supporters enraged by Mitchell's move. Among the more memorable replies: "You need to back the fuck off Trump before I put my foot so far up [your] ass you taste shoe leather."

Barlock isn't quite that blunt. But he blasts Republicans who want the votes of Trump fans but don't think accepting such support obligates them to The Donald.

"They want Trump voters to get them elected," he allows. "But if they are, we expect them to stand with our president. And if they show any tendencies to go against our president, we'll recall them just like we did when they stripped us of our gun rights" — a reference to the 2013 recall of two Democratic legislators, state Senate President John Morse and Senator Angela Giron, over their advocacy on behalf of post-Aurora theater shooting gun-control legislation.

"We'll be smart about it, too," he adds. "We'll use the Democrats' money. They'll be all for a recall. But then we'll put a Trump-loving candidate in their place."

Victor Mitchell during his own 2018 gubernatorial run.
File photo
It's absurd, in Barlock's view, to suggest that Trump should be impeached after Cohen implicated him in felony campaign violations over payments to Karen McDougal and Stormy Daniels, two of the president's former sex partners.

Such actions should result in nothing more than a fine, he feels — and he says holding Trump responsible for offenses committed on his watch by others would be tantamount to putting Mitchell in jail if one of his employees committed a crime.

At the same time, he argues that letting Democrats triumph would be bad for Colorado and the country as a whole. As a result, he encourages voters to pick Republicans across the board, even if there are reasons to wonder if their affection for Trump might expire the second they take office — because there's a surefire way to hold their feet to the fire.

"Our party is led by our president," Barlock points out, "and when these politicians turn on us as voters, we shall turn on them, and we shall recall them, because that's a voter's right. If a voter is lied to, we have every right to recall that politician. Frankly, that's something a lot of politicians in office now should understand. We can launch recalls against anyone from a congressman down to a dogcatcher. If you didn't keep your promise to the Trump-voting Republicans and talked out of the side of your mouth, we will recall you."