Sigri Strand
Archivist Jessie de la Cruz doing what she loves.
UPDATE: The deadline for artist proposals for Arthyve's Archives as Muse: Orphan Films project has been extended to September 7. Learn more about the project and submit proposals at Arthyve's website.

When Jessie de la Cruz and Sigri Strand put their heads together to launch Arthyve a year ago, their mission was to provide Colorado artists with the know-how and tools to document and archive their work online and in physical time capsules for future generations of artists and the public to peruse for inspiration. That’s still Arthyve’s intrinsic purpose, and the enthusiastic co-founders have made inroads in that direction since then, by hosting workshops, Wikipedia edit-a-thons, artist show-and-tell sessions and an Archives as Muse symposium; more recently, they’ve secured a brick-and-mortar space for Arthyve near the Capitol, which they hope to develop into a living workshop and archive library.

Executive director de la Cruz says that after a year’s worth of learning what works and what doesn’t, she’s ready to widen Arthyve’s reach. To that end, the project was recently awarded a $100,000 three-year challenge grant by the Orphiflamme Foundation that will make all the difference moving forward.

A laugh with Jessie de la Cruz at an Arthyve discussion hosted by Georgia Art Space.
Sigri Strand, Arthyve
“Starting a nonprofit from the ground up is difficult, and archives are still very abstract things,” de la Cruz notes. “Having somebody actually see and really understand what Arthyve is and believing in us enough to be funding us came at a really wonderful time.”

And creating a viable space for Arthyve is first on de la Cruz’s list of goals. “We’re designing — and I’m really excited about this — a physical Arthyve lab that members would have keys for, as well as access to the room unescorted. It will be filled with workbooks, tutorials and videos to guide people through the self-archiving process of creating a video diary to accompany their art time capsules. Artists could also use it for help documenting their artwork for shows.” 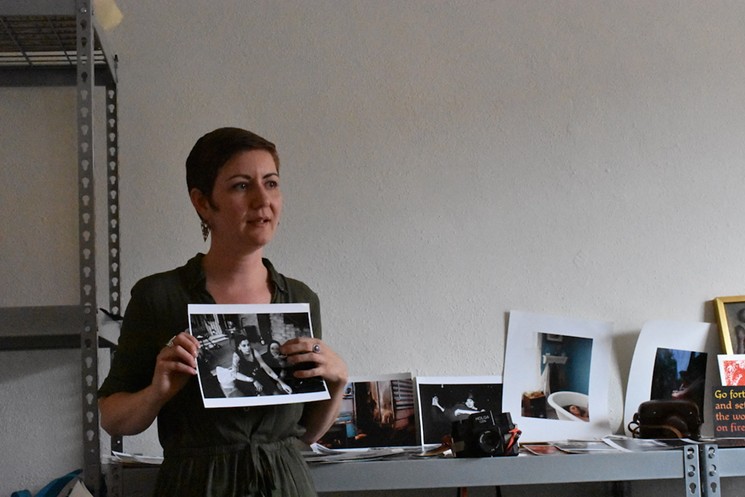 Photographer and Arthyve co-founder Sigri Strand explains her own archival materials.
Katie Taft, Arthyve
De la Cruz also hopes to take the initiative in new directions. “We’re getting ready to launch a program I'm very excited about called ‘Citizen Artivist,’ she adds. “The whole concept is that we train citizens and artists how to go out and document and archive events themselves.

“For instance, Yo Yo Ma was just here, visiting and performing at different nonprofits around Denver. A lot of people took pictures, and his visit had a huge impact on the city over just a few days. How do we understand or access that experience twenty years from now? There’s so much happening in arts and culture across disciplines here, and it’s all so ephemeral. How can we put that in the hands of people to decide what things are important? Also, that’s a whole other piece of the Arthyve collection, with us going out into the community
instead of just having artists coming to us.”

Sigri Strand's time capsule materials.
Sigri Strand, Arthyve
In the present, Arthyve is busy soliciting proposals from Colorado artists for the second annual Archives as Muse symposium, scheduled for November 4 in conjunction with the 2018 Denver Film Festival and focusing on film-based art installations rooted in personal experience. “Every year, we hope to focus on a different discipline,” de la Cruz explains. “This year, we’re looking to be inspired by orphan film, which can be home movies, films with no copyright, anonymous films. A lot is digitized and available. And we’re encouraging artists to look at their own home movies — their own part of our collective memories. By digging into orphan film archives, they could be inspired by the content to make new work.”

Arthyve boardmember Katie Taft unwraps the time capsule of late artist Steven Gordon.
Sigri Strand, Arthyve
But proposals have been slow to come in. “So far, we’ve gotten a lot of questions and correspondence, but we were clenching our teeth at the last minute last year, too,” she says. Even artists might need some convincing. “One main reason for doing this is to lower the barriers of access to archives; some people still find the idea off-putting and overwhelming. Archiving is still an abstract idea.” The deadline to submit is September 7. Learn more about how to make a proposal online.

The culminating program will include presentations by four vetted local artists, with a keynote by orphan-film archivist and scholar Snowden Becker, a founder of the international film phenomenon Home Movie Day. An after-party at the McNichols Building will include spins by Jeremy Peterson that reflect music inspired by films or in films. Watch Arthyve’s website and Facebook pages for updated information. 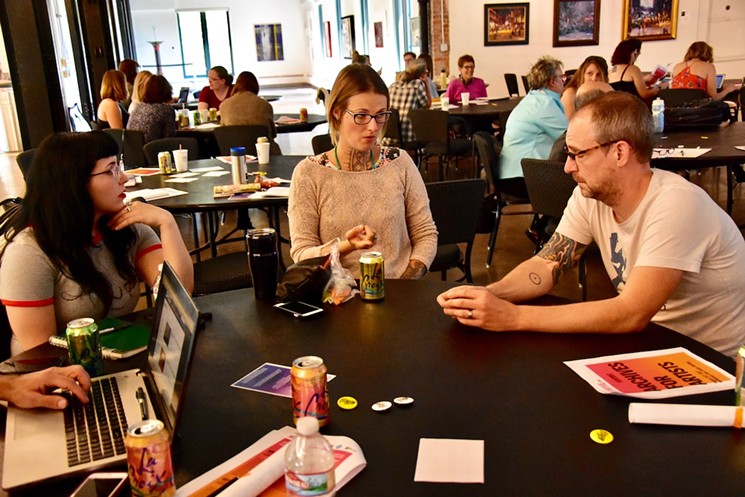 An Archives for Artists discussion in 2017.
Sigri Strand, Arthyve
After that, de la Cruz and Arthyve can begin to address how to make some best-case-scenario dreams come true. “First, we are going to be developing workshops, music and performances to engage people and teach them how to build and archive studio practice,” she says. “All documentation will be available for free, and you won't even need to be a member of Arthyve. Building a membership is not our core mission.

Artist Anna Millholland at an Arthyve artist show-and-tell session.
Sigri Strand, Arhyve
“Our ultimate goal is to have a freestanding building that would be a touchstone of the city, where people could come and look at archives and celebrate the artists and creatives working across our state,” she adds. “There would be a front-and-center stage for public programming, a study gallery and time capsules with listening stations, where people can hear an artist’s voice and explore the context of archived materials. That’s so important, but it’s something that’s often lost in archives. We let artists be their own curators.”