Aspen Moon Farm
A spring hail that caused damage at Aspen Moon Farm.
Josh Olson was busy getting a delivery ready in his walk-in refrigerator at ACRES at Warren Tech, a teaching farm in Lakewood, when suddenly it sounded like a twig had gotten stuck in a large fan. But the sound wasn't a machine malfunction; it was coming from a pelting of nickel- and pea-sized hail falling all around the building.

"I immediately yelled for my puppy to come in," says Olson. "This was like a machine-gun-style hail, and it pretty much took out most of our future production of heirlooms, winter squash, and a majority of our cucumbers and the majority of our hot peppers."

Olson says the overall damage equated to around $10,000, and it happened in just ten minutes. 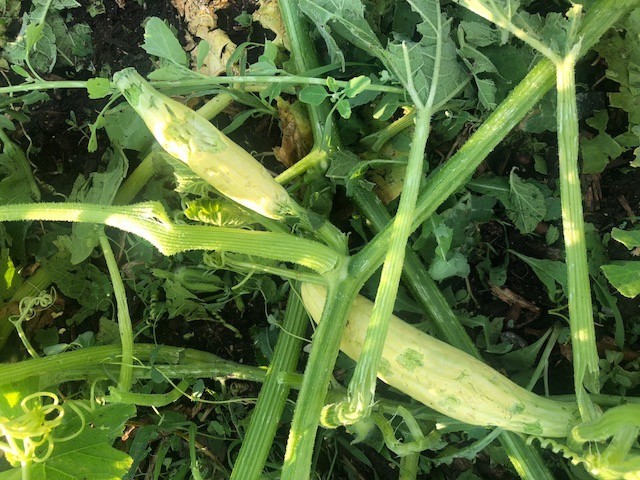 A squash plant at ACRES at Warren Tech that suffered hail damage.
Josh Olson
This wasn't the first devastating hail to hit Colorado this summer, and ACRES was far from the only farm to get hit. Lee Aguero, owner of Lost Creek Farm near Hudson, say this was the seventh storm to blow across the property, wiping out most of his production.

"Everything looked great, and then it was shredded," says Aguero, who has dealt with tornados, severe wind and hail since spring. The first storm took out the early growths, delaying his stand at the Union Station Farmers' Market until August. And when the plants had come back enough and produced food to take to the market, another storm hit. The three-foot tomato plants were gone. One-third of his hot peppers, obliterated. Half of the sweet peppers were stripped, and the cucumbers were flattened. Lee Aguero shows hail damage on a cherry tomato from his Lost Creek Farm.
Linnea Covington
"I always have a hail crop, but this year it didn't help since it was also wiped out," he says while manning the booth at the Union Station Farmers' Market last Saturday. It was easy to see the damage his produce had suffered; the cherry tomatoes and peppers had little pock marks, the corn wasn't fully mature since it couldn't finish pollinating, and the cucumbers that made it were scarred. They're all still tasty, he says, but they just don't look as pretty.

"I'm lucky, because I have other things going on, so we're okay," he says. "Otherwise, it would have ruined us completely." A hail-pocked pepper from Lost Creek Farm.
Linnea Covington
For micro farms like Lost Creek Farm, devastating storms can easily put them out of business, since crop insurance isn't available for the small producers you usually see at farmers' markets. The reason it's so hard for these family plots to get insurance comes down to numbers and policies that center around insuring not the entire acreage, but each individual crop. For example, you would have to get separate coverage for cherry tomatoes, heirloom tomatoes, corn, peppers, cucumbers, melons and so on.

Mark Guttridge, who runs Ollin Farms in Longmont with his family, grows 7,000 pepper plants, which may seem like a lot, but in reality only take up one acre. When you are dealing with a farm that grows twenty to thirty acres of one crop, he says, one acre is nothing. Unless, of course, you lose all of that in a storm, which happened at Ollin Farms on August 18. 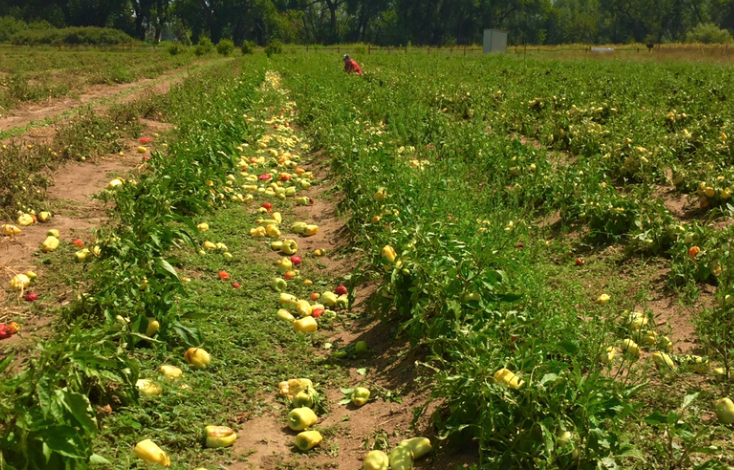 Hail destroyed the peppers at Ollin Farms.
Mark Guttridge/Ollin Farms
"We are unable to get insured, and that's crazy," says Guttridge. "There's no crop insurance that's available for these diversified farms."

The last storm was the fourth or fifth to cause damage at Ollin Farms, but while the others destroyed a little here and there, none had the impact this last one did. One reason the damage proved so great was because the plants were doing so well. 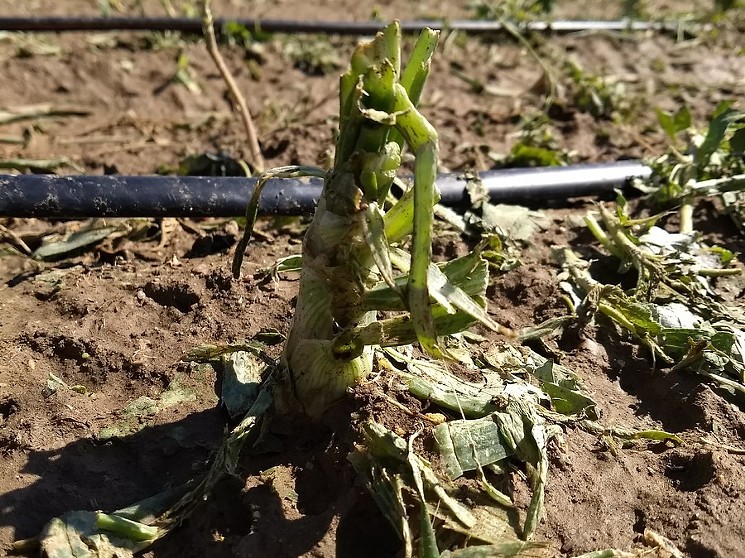 One of the hail-damaged crops at Aspen Moon Farm.
Aspen Moon Farm
"After the first ones, I nurtured the plants back to health and built that biological system again and got the plants healthy again," says Guttridge. "They were getting fully loaded and ready to hit their peak season. Then the storm came last week, and the pea-sized hail came with so much wind, it was like horizontal hail, and it dissolved all of the plants."

Overall, Guttridge says he lost 80 percent of his tomatoes and peppers. Over the last week, he and his workers have been pruning the plants, plucking off dead and rotting produce and harvesting the few peppers that were protected through the storm. This week he will start on the tomatoes.

"It's heartbreaking, to see the broken plants and take all those peppers off of 7,000 plants," he says. "We are hoping they will put out new flowers and fruit before the first frost, and we did what we could to give it the best chance." 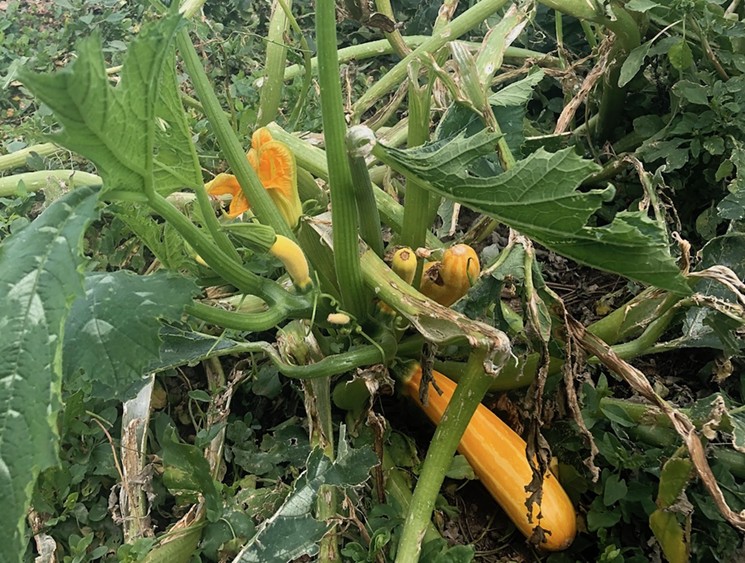 Squash plants regenerating after hail damage at ACRES at Warren Tech.
Josh Olson
But despite all the heartbreak, Guttridge finds joy in the tragedy as the community and neighboring farms rush to his aid. The donation page he set up already has more than 100 donations, and, he says, while it doesn't make up for the loss, it makes a difference. A big part of the help comes in the form of a morale boost. During Ollin Farms' annual farm dinner last weekend, the family that runs Monroe Organic Farms brought eight trays of beautiful bell peppers, both for Guttridge's CSA subscribers and to deck out the table.

"You don't see this sort of thing happening in any other business, and that's why I got into farming," says Guttridge, who worked as an engineer up until this year, when he finally made Ollin Farms his full-time job. "These things come and make you a better farmer, and it makes the community stronger as you get through this together."

The best way to help farmers through these disasters is to shop the farmers' markets, don't be afraid to buy ugly produce (it still tastes great), donate to farmers' funds, and ask your representatives to find a way to change how these small businesses get insured. You can also check and see if any of the damaged farms need volunteers to help clean up. Aspen Moon Farms, for example, got hit by four storms this season — including the worst one on August 18 — and is looking for workers; the farm has started a GoFundMe page as well as one other donation spot.