To promote its last concert, the group's members didn't just tell me about it or send a Facebook invitation; they brought a printed wax-sealed invite to an upcoming show at the Larimer Lounge to our interview. The paper looked like it had been soaked in coffee, the edges were burnt, the text was faded and looked as if it was fresh out of a typewriter, and there was a faded old photo of an old woman in front of a cathedral enclosed inside.

"I used to collect photos like these and make out of them," says frontwoman Demi Demitro, her eyes lighting up.

The Velveteers' music and live show evokes something more akin to a séance in a shadowy room with a thunderstorm clamoring on outside than a run-of-the-mill concert. The bandmates' presence as people and performers is dark, forbidden and enticing all at once.

No strangers to success, sibling duo John and Demi Demitro have been at it for four years, striking a visual and sonic balance that falls somewhere between a Grimm Brothers fairy tale and a glam-goth desert-rock supergroup. They’ve played shows and toured with national acts, become a household name in Denver, and formed a unique identity and mythos around themselves in the amount of time it takes most bands to draw a decent crowd on a weeknight.

In mid-October, the band is embarking on a U.K. tour; it's the Velveteers' second time overseas, but their first as headliners. 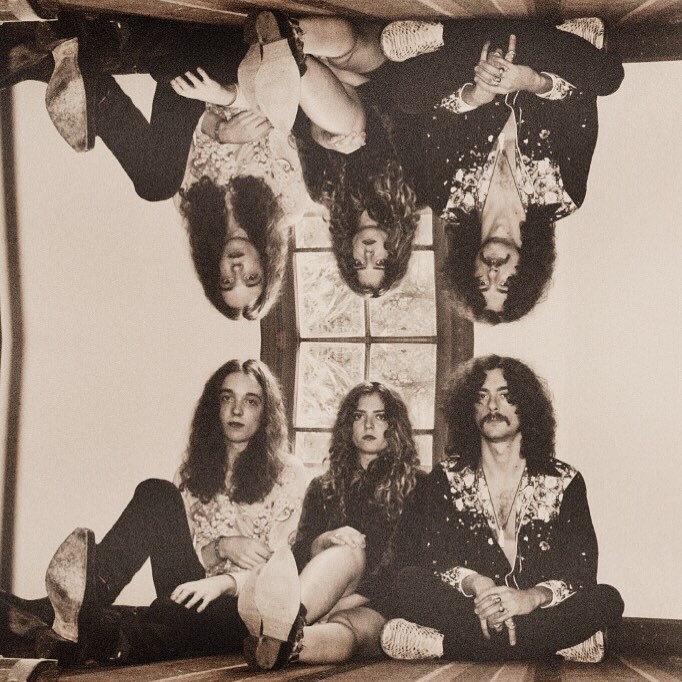 The Velveteers
The group has recently rounded out its lineup with drummer Adrian Pottersmith, a longtime friend. “A few years ago, when I was still learning how to play guitar, I met Adrian through John," says Demi. "They were the first two people I ever played music with. Now that the three of us are back together, it feels so right."

Demi and Pottersmith emphasize that having two drummers is a twist on the two-piece band, something they’ve wanted to embody from the start. They’re still keeping things simple with two instruments as their base, but are using their rhythm-heavy and percussive sound to its full advantage by doubling up on drums. It's something they've experimented the past, playing a short stint of shows earlier this year with former Yawpers drummer Noah Shomberg, but it wasn't until Demitro reconnected with Pottersmith that the idea of having two people behind the kit became feasible.

“[Having two drummers] opens up a lot of doors creatively,” Pottersmith says. “It also gives us the freedom to add different instruments and expand our sound further. With two of us, we can do things that not a lot of other bands can do," Pottersmith says.

"I've never seen John connect so well with another drummer than he does with Adrian," Demi added.

The band’s forthcoming U.K. tour will be Pottersmith’s first time on the road. He’s spent the past few years playing in local bands that the scene never caught wind of, so joining the Velveteers has been a welcome change.

“It’s unreal. I didn’t think that my first tour would be at this level. I always imagined it would be kinda dinky, driving around in a van around the country. You’re supposed to work your way up to [touring overseas],” he  says. 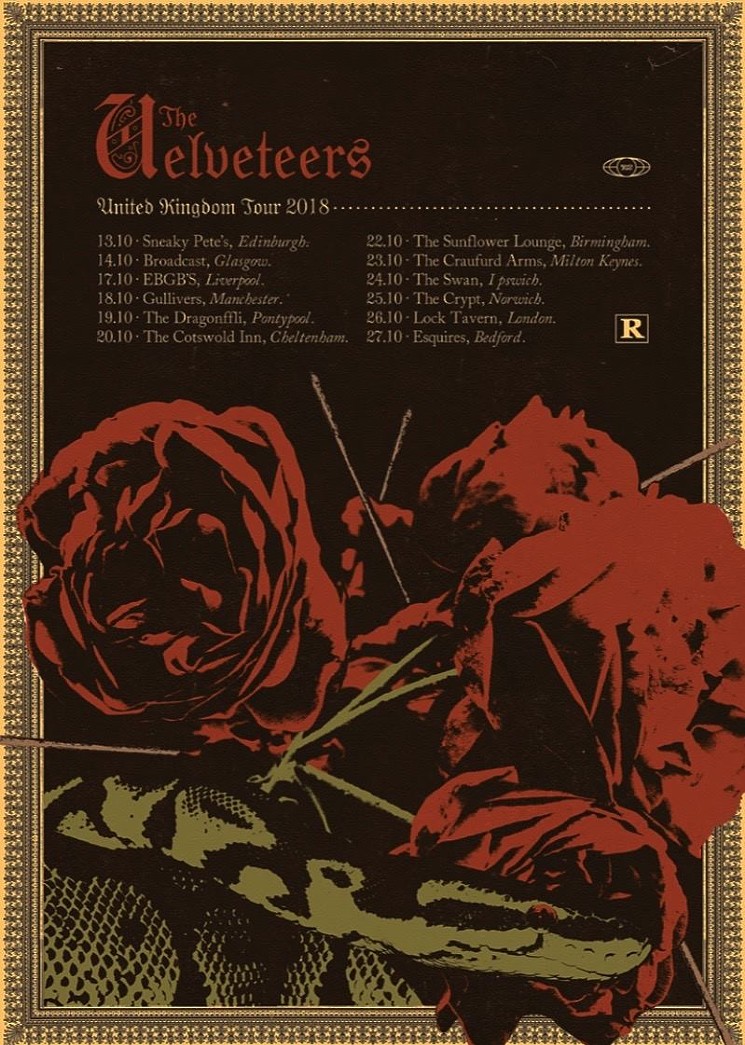 The Velveteers U.K. tour poster.
The Velveteers
The first time the band toured the U.K. was in 2016, with the Los Angeles rock band Valley, playing to clubs every night and amassing an impressive audience throughout Europe. This time, they’re calling the shots, which means less luxury and more work, but they're more than happy to deal with some of the mundane realities of being in a band in order to find their lightning on stage.

“[We] enjoy every minute of being in a band, whether we’re playing to a thousand people or fifty. Coming back to the U.S., playing shows here and having to establish ourselves was definitely a big change from playing theaters every night [with Valley in 2016], where we had a driver and our own sound guy," Demi says.

Before they depart for the U.K. next month, they’re playing two kickoff shows in Colorado to commemorate the tour and celebrate the release of their debut, self-titled EP. The first show is at Hodi's Half Note in Fort Collins on October 4, and the second is on October 6 at the Larimer Lounge.

In addition to working on a self-produced video for the song “Anastasia Sings” — a standout off their debut EP which the group is planning on releasing in early October — the Velveteers are also teasing big news for 2019. Hinting at a revamp of their sound and a collaboration with high-profile figures in the industry to release a debut full-length, Demitro and Pottersmith talk about their plans for 2019 with sly vagueness, trying not to give away too much, but also letting their excitement slip in between the cracks.

“The songwriting is really changing, but we’re still a rock band. I think any time you work with someone different, a new sound comes out of it. We’re working with new people who we highly respect. Sonically, people can expect a heavy album, but one that’s also much different than our EP,” Demitro says.