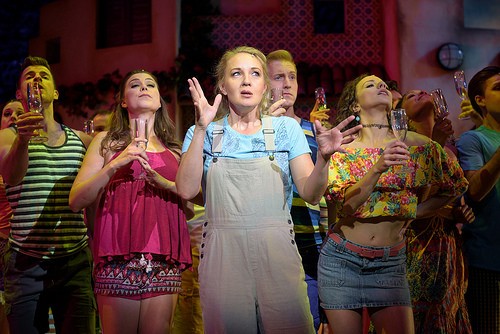 Matt Gale Photography
Shannan Steele as Donna with ensemble.
I’m not the target audience for Mamma Mia!, the season opener at the Arvada Center. I barely remember the 1970s disco sound of ABBA, but friends assured me before I went to the show that it was catchy and danceable, and director Rod Lansberry can almost always be trusted to find fine singers and musicians. I knew the musical would be silly and light as air, but I anticipated that it would provide clever-silly fun and make for a relaxing, stop-gritting-your-teeth-over-current-political-realities evening.

It didn't. I'd expected the plot to be sitcom-thin, but somehow I didn’t realize quite how thin it could get. Pretty Sophie lives in a Greek taverna run single-handedly by her mother, Donna. Sophie is about to get married and is determined to find out who her father is, since Donna slept around. There are three possibilities, each referred to in Donna’s diaries, which Sophie has read surreptitiously. So she invites all three men to the wedding, and eventually to walk her down the aisle — without telling Donna her plans — to the giggly glee of two good friends who were once backup singers in her band. Naturally, Donna is surprised and pissed, but it turns out she still has feelings for one of the men. Who knows why? None of the three has specific characteristics or even an interesting song, though one is an English financier, one an architect and one a travel writer. (Anyone remember Bianca’s suitors, Tom, Dick and Harry, in Kiss Me Kate, and the hilarious song in which she asserts that she’ll be happy to marry any of them: “I’ll take a Dick”? The comparison doesn’t do ABBA’s vapid music any favors.)

We never find out who Sophie’s father actually is, but no one seems to care whether the riddle gets solved. Of course Donna and the man she still loves eventually unite — it would have happened sooner except that he somehow forgot to mention that he was divorced and therefore free until near the end of the show. There’s a wee bit of tension between Sophie and Donna, mother-daughter stuff. And Sophie ultimately decides to emulate her mother’s approach to love, skip the wedding and just live free and happy with her generic beach boy. Even for a sitcom, this is lazy. I picture writer Catherine Johnson tossing together this embryonic story while stuffing herself with cupcakes, eventually sliding down in her chair, synthetic frosting all over her lips and cheeks, too sugar-sated to flesh it out.

Of course, the story is just a frame for the musical numbers and a lot of dancing, but those numbers aren’t electrifying enough to carry the evening, despite a slew of energetic performances. While both Mariah MacFarlane (Sophie) and Shannan Steele (Donna) have lovely voices, the men generally don’t. Or if they do, the songs — along with some problems with sound and miking — don’t give them a chance to show it.

If there's a reason to see Mamma Mia!, it's Steele’s performance as Donna. She isn’t an artificial musical theater-style actor, as her tough-minded performance in Murder Ballad proved two years ago at the now sadly departed Edge Theater. She’s warm-blooded, alive and spontaneous, and she has that gorgeous voice, rich and full. Here’s hoping she’s cast in something stronger, smarter and more exciting than Mamma Mia! soon.