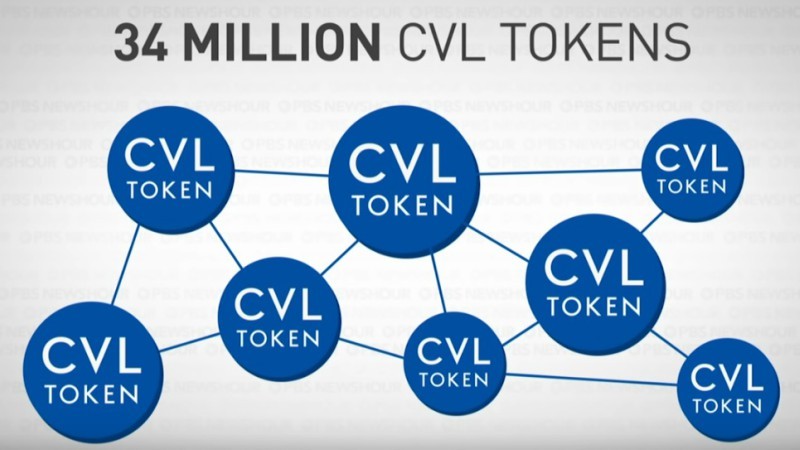 YouTube
A graphic representation of CVL tokens, whose initial sale offering has been a bust.
As promised, the ambitious media company Civil has provided an update about the sale of CVL tokens, a cryptocurrency intended to fund journalism startups such as the Colorado Sun, a new online news agency operated by former Denver Post staffers that was able to launch last month thanks to its resources. And while the token sale doesn't officially end until Monday, October 15, it appears to be a catastrophe that will fall well short of its goal.

Still, Colorado Sun editor Larry Ryckman insists that the ultimate success or failure of the sale is largely immaterial to the local site. "It doesn't threaten our future," he says. "It's really not a huge event for us one way or the other."

On October 8, Civil co-founder Matt Coolidge offered a primer about cryptocurrency and blockchain, the technology at the heart of its journalism model. But he declined to go into much detail about the token sale in the context of tweets from Joshua Benton, director of Harvard University's Nieman Journalism Lab, who maintained that only a little over $1 million had been spent on the currency toward a minimum goal of $8 million, and the vast majority of the total had been purchased by a single entity. Instead, Coolidge promised that the details would be forthcoming.

Two days later, on October 10, Civil did indeed offer fresh information under the byline of Civil CEO Matthew Iles, and its contents were frank. The item's headline, "The Civil Token Sale's Eleventh Hour," was followed by a subhead that reads, "This isn’t how we saw this going — but our company and our community are pushing hard to make it happen. We don’t know if it will work."

According to Iles, 681 individuals from 61 countries had completed purchases of CVL tokens as of this past Wednesday, totaling $1,344,721.59. This amount doesn't include tokens worth $798,503.71 associated with folks who were "either stuck somewhere in the process or simply haven't decided to fulfill their commitment yet" — meaning there's no guarantee that any of it can be considered tangible.

Civil CEO Matthew Iles, foreground, during his visit to Denver for the Colorado Sun launch announcement in June.
Photo by Michael Roberts
This response becomes even more disappointing in the context of another Iles revelation: Of the $1.34 million, $1.1 million, or about 82 percent, was purchased by ConsenSys, Civil's main investor, whose website describes its business model like so: "The ConsenSys 'hub' coordinates, incubates, accelerates and spawns 'spoke' ventures through development, resource sharing, acquisitions, investments and the formation of joint ventures. These spokes benefit from foundational components built by ConsenSys that enable new services and business models to be built on the blockchain. In addition to the development of internal projects and consulting work, ConsenSys is interested in the identification, development and acquisition of talent and projects on an ongoing basis."

What will happen if $8 million worth of CVL tokens — a sum Iles refers to as a "soft cap" — aren't purchased by midnight on October 15? Coolidge, corresponding via email, acknowledges that "per the terms of the token sale, it needs to hit a minimum of $8 million to be successful or all participants will be refunded their contributions in full. It means we'd need to figure out another way to distribute CVL tokens to the 2,500-plus individuals who have already taken the steps to register to purchase them and join the Civil network."

For now, Coolidge continues, "we remain fully focused on doing everything we can to get to $8 million in contributions by 11:59 PM ET Monday night."

Making a rush to purchase the tokens that much more unlikely was an October 10 plunge in the cryptocurrency market, which was estimated to have lost $13 billion in value within around three hours.

"We face long odds, and we know that," Coolidge concedes, "but we're not giving up on this token sale until the bell rings. Of course, we have also been thinking about alternative ways to distribute CVL tokens in a manner consistent with the consumer token framework around which we've designed this model (read: the approach we believe takes all relevant steps to satisfy the real and valid regulatory concerns on cryptocurrencies). I'll defer any specifics on that front to post-Monday, if/when they're relevant — but the gist of it will be a more continuous distribution model, with no hard deadline nor soft-cap target."

Colorado Sun editor Larry Ryckman.
YouTube file photo
Even if the worst happens, though, Coolidge stresses that the results won't "impact the grant funding we've provided to the Colorado Sun and thirteen other newsrooms — which isn't coming from the token sale proceeds. One hundred percent of net proceeds (e.g., everything minus taxes) will go to the nonprofit Civil Foundation."

Ryckman spells out this distinction. "The Civil Foundation is a nonprofit entity, and the proceeds are intended to provide seed money for news startups," he says. "So the Colorado Sun wasn't necessarily going to get any money from the token sale, because we've already gotten our seed money. Our relationship with Civil is the Civil Media Company, a for-profit entity."

That relationship could get closer. "At some point, Civil could become an investor in the Colorado Sun," Ryckman reveals. "That hasn't happened yet, but we're in talks with Civil and other people, as well."

There's a lot Ryckman won't reveal about these conversations, including how much money Civil gave the Colorado Sun in the first place. Moreover, there's no telling if ConsenSys will back Civil with the same level of enthusiasm it's exhibited to date given the anticipated outcome of the token sale. As such, Ryckman makes it clear his site is seeking cash from multiple sources.

"Subscriptions are a much more stable source of funding for any organization," he allows, "and we realize that's where our future is — in serving subscribers. But we've also understood that we will need revenue from other sources, whether it be grants from foundations, Civil or otherwise, as well as corporate sponsors and underwriters. To me, it's an all-of-the-above scenario for us. We don't have all our eggs in one basket — and we certainly don't have them in the token basket. We've always viewed the tokens as voting shares in the governance of Civil."

In the meantime, Ryckman lauds the announcement that Forbes is experimenting with publishing on the Civil platform. "That's a huge vote of confidence in Civil's mission, and we're excited to be a part of it. We're confident in the future, no matter what happens with the token sale."