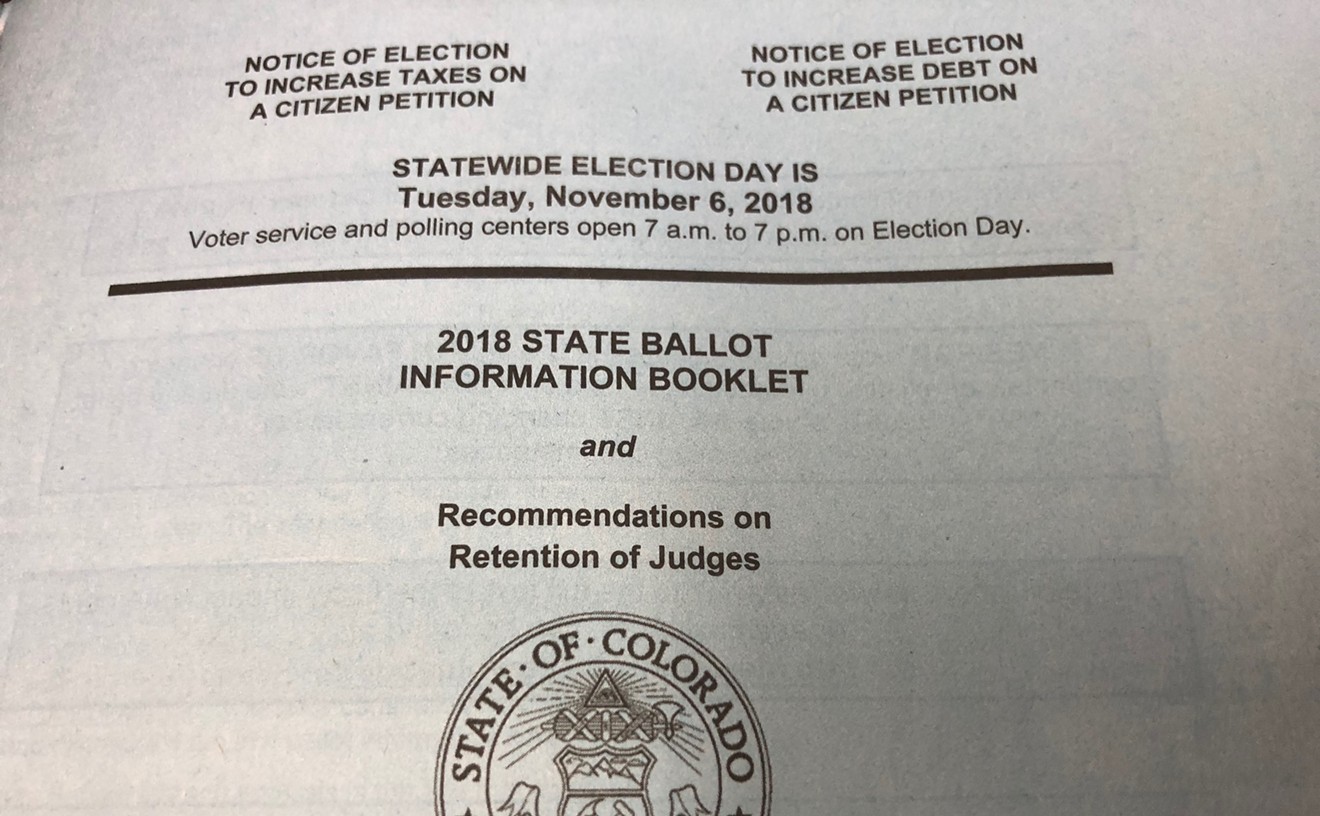 Paige Yowell
This blue book didn't appear to be missing any pages, but some are.
If you're looking to your handy Colorado Ballot Information Booklet, aka the blue book, for information on the upcoming election, you might be looking for something that isn't there — if you even got a blue book in the first place. Proponents of various ballot initiatives included in the blue book are finding that some books have pages missing and have at least one error.

Some books are missing pages 27 through 42 and pages 67 through 81. The "yes/no" checkbox on Proposition 112, which would mandate 2,500-foot setbacks for new oil and gas drilling near schools and homes, is also absent from the "voter cheat sheet" page in blue books. The missing pages included information on various ballot initiatives, including Proposition 111, which would place limitations on payday loans, and Amendment 73, which would raise the corporate tax rate and raise taxes on earners making more than $150,000 per year to create a new education fund.

The missing pages were the result of an equipment malfunction during the printing process, explains Natalie Mullis, acting director for the Legislative Council staff, which is responsible for distributing and creating the blue books. The council doesn't know how many households were sent incomplete blue books, but Mullis says it has identified five for sure.

"Particular pages that were missing were missing because of the random application of that malfunction. It had nothing to do with the content," says Mullis.


"They're just gonna forget to vote on that, and that's a problem."

A blue book with missing pages was sent to a volunteer for Colorado Rising, the group backing Proposition 112, says Anne Lee Foster, Colorado Rising spokeswoman. The check boxes on the "voter cheat sheet" appear to be missing from all of the books, Foster says. It might not seem like a big deal, but Foster argues it could lead to voters skipping over that initiative altogether.

"It's the last one that's listed and down-ballot issues tend to have voter drop-off, so if they just leave that off, and then somebody might think they're done with their ballot because it's not in their voter guide. They're just gonna forget to vote on that, and that's a problem," Foster explains.

Mullis, for her part, says "it's a shame that that happened," but she doesn't think the missing check boxes would prevent anyone from reading or learning what they need to learn about Proposition 112.

Then there is the fact that many voters in western and eastern Colorado didn't get blue books at all because they were mailed to physical addresses rather than preferred post office boxes, requiring roughly 90,000 blue books to be re-sent. Mullis said that problem was caught fairly early.

A coalition of the seven ballot initiative proponents left out of some blue books are now calling for a PSA campaign from the Legislative Council to inform voters of the problems so that they can get a new book before voting. Ballots are being mailed out October 15.

Foster says the fact that many rural, likely conservative, voting households didn't receive blue books at least reassures her that the errors likely weren't intentional, since the initiatives missing from some books are preferred by Democrats. While claims of bias in blue books do come up, Foster says she can't remember errors of this magnitude in blue books in the past.

Mullis says anyone who didn't get a blue book because they changed addresses or for any other reason should contact the Legislative Council at 303-866-3521 or [email protected] Blue books are also available in room 029 at the Capitol building or in all county clerk offices, and the book is available online at coloradobluebook.com.