Review: Acova Creates a Local Roost for a Fast-Changing Neighborhood 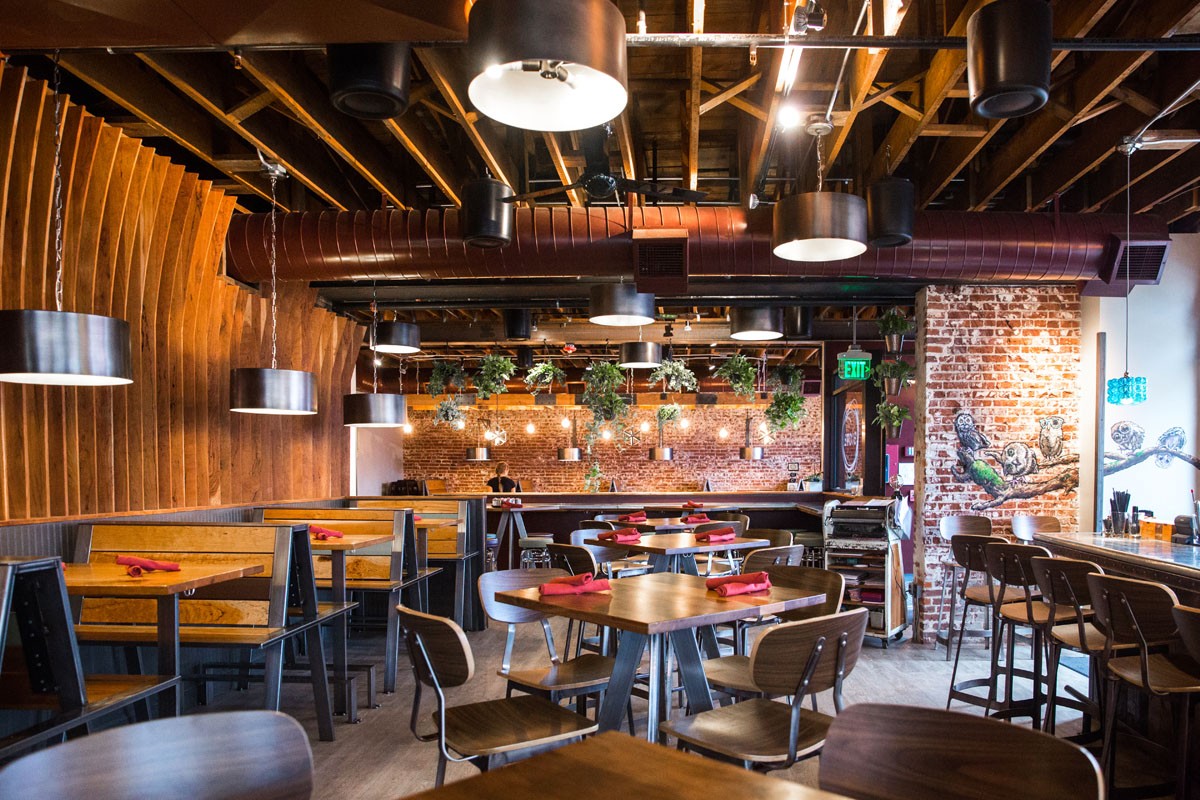 Danielle Lirette
The building that once held Patsy’s was totally transformed for Acova.
I’m still nostalgic for Patsy’s, the Italian restaurant that closed two years ago, just shy of its hundredth birthday. It always reminded me of a family-run ristorante I grew up with in Cleveland, where I learned the proper chewiness of cavatelli, ate my first escargot, and soaked up the elegance of leisurely meals that started with Manhattans (my grandmother’s) and ended with berry-filled cassata cake (mine). I miss them both for the same reason: They were part of a dying genre.

I have my own neighborhood Italian now, one that’s old by current standards but not historic like Patsy’s. It’s close enough to walk to, and my children have spent countless hours there, filling up on bread despite my warnings and learning to twirl spaghetti. Time will tell how that restaurant plays into their memories, just as time will tell how Acova, which took over the old Patsy’s space, will shape the memories of the children who call that neighborhood home.

If you didn’t know Patsy’s, you’d never guess that Acova went into such a storied space, one that opened in northwest Denver long before this area became known as LoHi. While the new look may be heartbreaking for old-timers, change isn’t always bad. Restaurants that take on old locations can have a hard time overcoming their outdatedness. Solitaire, Clyde and DJ’s Colfax Cafe recently gave it a shot. All have closed. 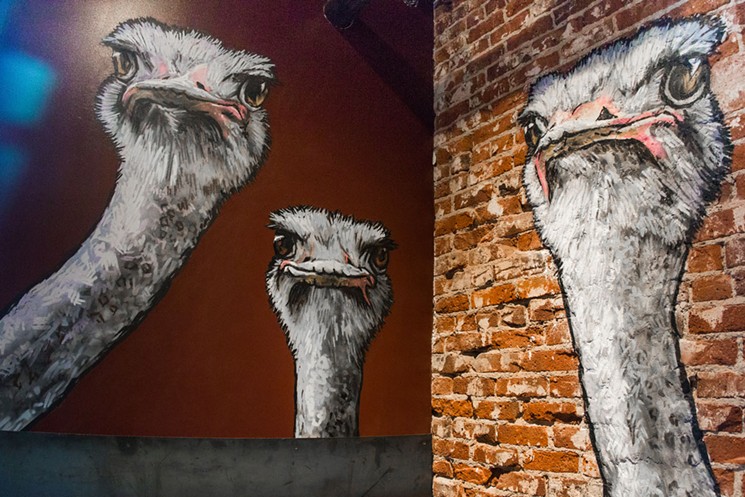 Old walls, new art at Acova.
Danielle Lirette
In contrast, Acova (in Italian, the name means nest — or, more accurately, to sit on eggs) is contemporary, whimsical and welcoming, with ostrich heads painted on exposed brick, a host stand made from a repurposed Patsy’s pasta maker, and blue pendant lamps. Garage windows flood the corner bar with sunlight. The dining room is minimally adorned, relying on cool lighting and wood-and-metal booths to create a clean aesthetic. The space could easily double as a cider house or brewpub, but it’s got the makings of something more: a neighborhood gathering place, similar to the Hornet...which is owned by the same people who bought Patsy’s.

Renovations were extensive. “We had an original idea of the budget and it tripled,” says managing partner Betsy Workman, who owns the restaurant with her husband, Sean, and Paul Greaves. Patsy’s owners “had input to some degree. They’d asked us to keep the four walls of the business, and we did! It would have been easier to start over, but we stayed true to our word. That led to a year-and-a-half delay.” They’d also wanted a neighborhood restaurant — “They liked the Hornet,” Workman says — and the new owners kept their word there, too. 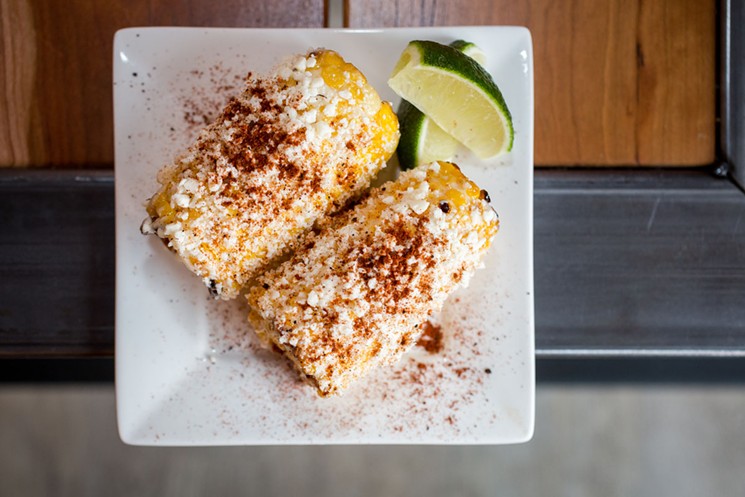 Happy-hour elote makes diners happy, indeed.
Danielle Lirette
Acova focuses on things that the changing neighborhood wants, like happy hour, which attracts young singles on their way home from work, enticed by $4 well drinks and wine slushies. There’s a well-landscaped patio with flowers, waving native grasses and shaded tables, as well as a playground. Yes, a playground: You can bet the swing will factor into some kid’s lifelong memories. If you don’t have kids and don’t want to hear kid noises, you can always sit in the bar and catch a game, or go during the day when they’re at school.

The menu caters to the neighborhood, too. It’s vast and meandering, with abundant workarounds for those with dietary restrictions. Guest-driven rather than chef-driven, it seems designed to answer the question of “What could you possibly want to eat?” rather than “What do I want to cook?” The result is a friendly roster of appetizers, soups, sandwiches and entrees that feels very American, serving a little bit of this and a little bit of that: gnocchi Michoacán, Havana panini, Capo di Capitan sandwich, Mediterranean hummus. There’s no old-school Italian, though. “We were thinking about doing spaghetti and meatballs,” says Workman, “but we thought about it and said, ‘Wait a minute, if we try to put something like that on the menu, it wouldn’t compare and it would be disappointing to people who loved those recipes.’ We didn’t want to compete with [Patsy’s], because you can’t. It was its own fantastic-ness.” 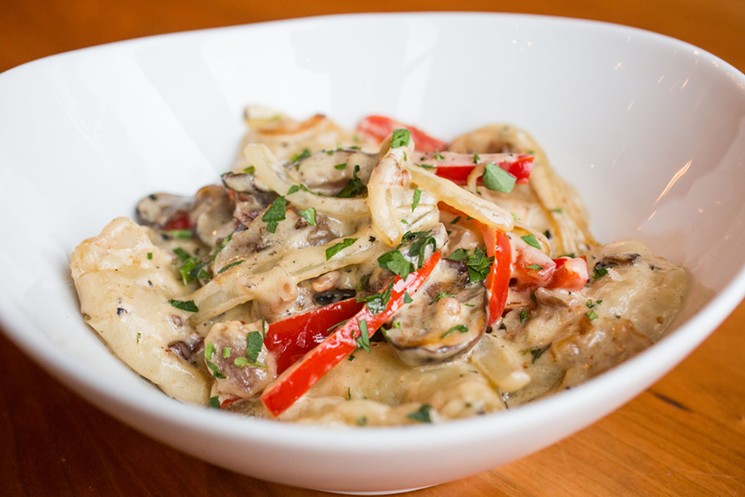 Potato and cheese pierogis
Danielle Lirette
The diversity of the new menu makes it easy to drop by regularly without getting bored. But it’s also Acova’s shadow side. The kitchen is asked to do so much, it sends out plates that work better on paper than at the table.
We started with house pretzel bites, because I’ve had my share of disappointing ones lately — including at the Broadmoor — and every bad one upped my craving. Besides, it’s rare for restaurants at this price point to devote staff time to making soft pretzels, and I admired the kitchen’s ambition. The pretzels looked terrific, with fat flakes of salt on golden, puffy nubs, but they were dry and hard in the middle. We tried dipping them in cheddar-beer béchamel, but soft pretzels just don’t work as biscotti. (Turns out the pretzels are no longer made in-house, despite what the menu and our server said.) Elote came next, a fine rendition of this classic Mexican street food. Fresh not frozen, the corn was rich with aioli and cotija, bright with lime powder, smoky from the grill. If our next courses hadn’t been on their way, we would’ve ordered another round.

This yoyo between “ho hum” and “hell, yes” became a pattern, making each course a guessing game. Would we love it? Or would the server offer to take it off the bill because we’d eaten so little? Green Goddess deviled eggs tasted like lime custard; the avocado that turned the filling green got lost entirely in the lime juice and citric acid necessary to keep it fresh. Cheese pierogi fared better: Tossed with herb butter, mushrooms, peppers and bacon, the fat pierogi, a cross between ravioli and dumplings, were earthy and seasonal. Listed as an appetizer, they would hold their own as an entree. 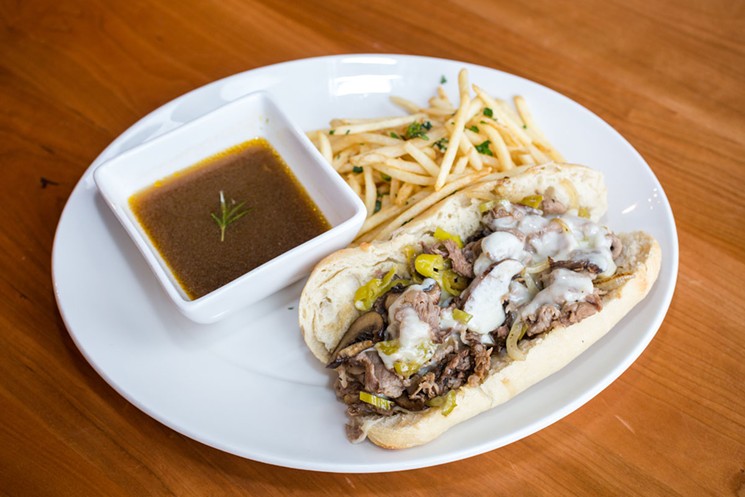 Philly style French dip satisfies.
Danielle Lirette
The server urged us to get the Philly-style French dip, a wise move. With classic dips, the jus makes or breaks the dish. This jus was lackluster, thin-bodied and not entirely housemade, but the Philly didn’t need it, anyway, given the cheesy pile of beef, onions, mushrooms and pepperoncini. A veggie burger, however, was gummy and heavy on chickpeas, with oats as a binder. Dependent on toppings for flavor, the patty was bland and got pushed aside as soon as the scant tzatziki and pickled onions ran out.

Would soups, one of the possible sides that come with sandwiches, survive the ups and downs? I thought so after a welcome cup of posole. Loaded with diced pork and topped with cheese and tortilla strips, the spicy soup easily upstaged the sandwich it came with. But a cup of tomato basil verged on pizza sauce, loaded with herbs and sweet from puréed carrots and added sugar. (Temperature was often an issue, too, with soups sometimes arriving far from hot.) Sweetness took down other dishes, as well. Acova’s take on a Cubano, called a Havana panini, was riddled with pineapple-jalapeño jam that was all sweet, no heat, and didn’t have enough pickled onions to balance things out. The kitchen also held back on the honey-cayenne drizzle over the Honey Stung Fried Chicken, zigzagging what seemed to be straight honey around the edges of the plate. And berry cobbler was as cloying as a sundae-bar topping.

If there’s an upside to so many slip-ups, it’s that most resulted from poor execution, not misguided menu design, which can be harder to fix. Dial back the salt in the chimichurri on the cauliflower steak, and you’d have a lovely vegetarian meal with green beans, cherry tomatoes and polenta. Add another ladle of tomato-saffron broth to the Fisherman’s Stew and you’d have the makings of a rustic lunch, with plenty of liquid for dipping crostini. Executive chef Matt Miller is on top of recipes that need tweaking, like the deviled eggs, which are set to change in an upcoming menu update. “A few dishes, not a huge revamp,” says Workman. “A nice seasonal change.” 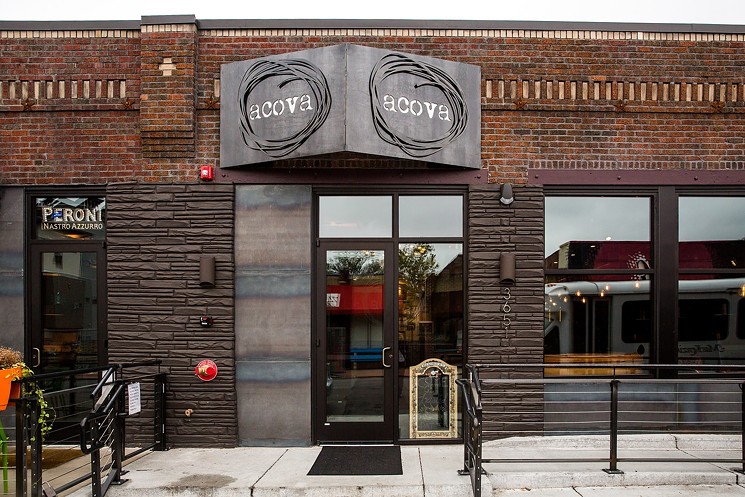 The entrance to Acova.
Danielle Lirette