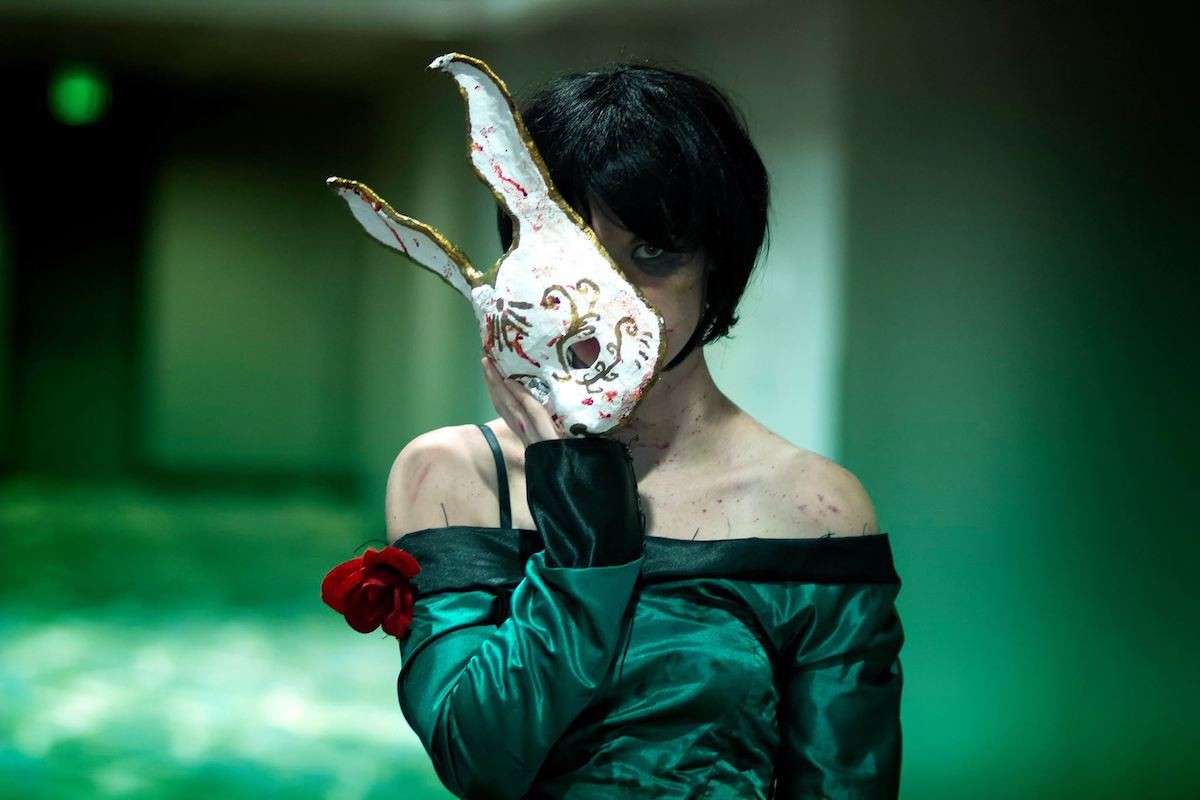 Courtesy of Cosplay Is Fun
Cosplay the weekend away at Daku Con.
The more important thing you will do all week is vote, but there's plenty to do after you participate in this great democracy of ours. A diverse array of plays opens this week, including updated versions of Hamlet and Tennessee Williams's The Red Devil Battery Sign. If fantasy is your thing, don't miss one (or all) of the many cons in Denver this week, from Daku Con to Rocky Mountain Con.

Keep reading for more cultural events, parties and lectures to take in this week!

No matter which candidates get elected or which ballot measures pass on Tuesday, November 6, you can at least have a winning evening at the Midterm Watch Election Night Party at the Denver Press Club, the country’s oldest press club. Its location in a historic building at 1330 Glenarm Place is just a few blocks from the last-second drop-off spot for late ballots; after you’ve done your civic duty, you can grab a seat at the bar or upstairs by the big TV to watch the returns, then cheer or cry in your beer. The party runs from 5 to 10 p.m. and admission is free (you pay for drinks and the pulled-pork buffet); RSVP at eventbrite.com.

Reel Women, a monthly screening series hosted by local comedian and cinephile Sara Hake, offers a humble yet meaningful corrective to the male-dominated showbiz paradigm by highlighting the work of female filmmakers. The show returns to El Charrito, 2100 Larimer Street, on Wednesday, November 7, with a presentation of Persepolis, Marjane Satrapi and Vincent Paronnaud's animated adaptation of Satrapi's groundbreaking graphic novel. An autobiographical account of growing up during the tumultuous and culturally restrictive Iranian Revolution, the César Award-winning film launched Satrapi's directing career, which includes The Voices, a diabolical foray into live action, and Radioactive, an upcoming biopic about Marie Curie. Celebrate women who create while watching some of the best movies ever made every first Wednesday of the month. Showtime is 7 p.m. and admission is free. Find more details by searching "Reel Women-November-Persepolis" on Facebook.

Denver’s trail-running scene keeps gaining traction, with more ultrarunners lacing up across the Front Range every year. To celebrate, Front Range runners will give their legs a rest and sit back with some of the best trail-running short films from 2017 at the 2018 Trail Running Film Festival. Screenings include Unsupported, a look at people running the 219-mile John Muir Trail; Faster, the story of Christof Teuscher's attempt to break the speed record on the Pacific Crest Trail; and Proof of Life: Pacing, the story of a runner diagnosed with a brain tumor. The festival starts at 7:30 p.m. on Wednesday, November 7, at the Oriental Theater, 4335 West 44th Avenue. For more information and tickets, $15, go to theorientaltheater.com.

Greeted with critical scorn and audience indifference upon its inaugural 1975 production, Tennessee Williams's The Red Devil Battery Sign is overdue for a cultural re-evaluation. Brimming with the great American playwright's signature Southern Gothic flourishes, tragic heroines and doomed romances, the rarely performed drama examines the societal paranoia that followed the assassination of President John F. Kennedy through the prism of noir-tinged intrigue. Plot elements that Williams's detractors found far-fetched at the time (governmental collusion with a hostile foreign regime, for example) seem eerily prescient in light of today's violently absurd political climate. That perspective informs the Community College of Denver's revival of The Red Devil Battery Sign, which premieres at 7:30 p.m. Thursday, November 8, in the Eugenia Rawls Courtyard Theatre at the King Center on the Auraria campus, with reprise performances on select dates through November 17. Tickets, which include free on-campus parking, are $10 for students and $20 for the general public; call 303-556-2296 or visit ccd.edu for details.

To see or not to see? That's hardly the question at 5th Wall Productions' presentation of William Shakespeare's Hamlet, which flips genders and cranks up the jams for an innovative spin on a stage classic. Director Thomas Gerlick breathes new life into the centuries-old tale of regicide and revenge — and offers a bit of sly meta-commentary on the Elizabethan era's all-male theatrical ensembles — by casting Alexandra Kulik in the titular role, giving audiences a whole new view into the psyche of drama's most indecisive Dane. Hamlet's adaptability is a key component of its cultural endurance, though the rest of the credit must go to one of history's most eminently quotable scripts. The production opens at 7:30 p.m. on Thursday, November 8, at the Bakery Arts Warehouse, 2132 Market Street, with repeat evening performances through November 17 and a 2 p.m. matinee on November 18. Buy tickets, $20, and learn more at 5th-wall-productions.ticketleap.com.

Made for your inner grown-up geek, Daku Con caters to pop-culture fanatics over the age of eighteen, bringing together cosplay, anime, gaming, comic books and panels, mixed with a little kink, for a three-day convention. The locally produced event goes live at 3 p.m. Friday, November 9 — don't miss the opening-night Wizard’s Ball from 7 to 10 p.m. — and runs through November 11 at the Radisson Hotel at 3155 South Vaughn Way in Aurora. Daku Con includes panels on both Furries and canine cosplay, a Q&A with South Park voice actors, costume contests, video programs, photo shoots, Japanese Christmas songs, a Hamilton Q&A and sing-along, a drag show and more. Three-day admission is $50 at the door ($100 VIP), and day passes range from $20 to $35; see a complete schedule at dakucon.org.

You know the holidays are just around the corner when MCA Denver dusts off its serendipitous Black Sheep Friday series for another year. Act like a child when the ninth annual series starts at 6 p.m. Friday, November 9,  with the Slinky Olympics, an evening of fun and games that includes Slinky stair-racing, a Slinky headband competition and, for no reason, dancing. Black Sheep Fridays continue every other Friday through January 18, with activities focusing on Mr. Rogers’s sweater-decorating, C’Rap Karaoke, the ever-popular XXX-Mas Craft Fair and more. Admission is free for members and $5 for non-members; register in advance and learn more at mcadenver.org.

Mambo across a cultural bridge to America's misunderstood island neighbor at A Night in Havana, a tuneful and tasty introduction to the new ¡CUBA! exhibit at the Denver Museum of Nature & Science, 2001 Colorado Boulevard. Enjoy live music, Cuban cuisine, informative presentations on the Caribbean nation's flora and fauna, and a rare after-hours peek at the evocative artifacts on display. Retreat from wintry climes on a faithfully re-created Cuban streetscape while sipping cocktails and cutting a rug from 7 to 10 p.m. on Friday, November 9; admission to the 21+ event, which includes a complimentary beverage, is $27 to $33 at dmns.org/cuba.

It might be a stretch to call the birth of the atomic bomb proper fodder for a rock opera, but Atomic: The New Rock Musical, written by Danny Ginges with music composed by Philip Foxman, is proof that it can be done — in this case, by singling out the story of Leo Szilard, a nuclear physicist who worked on the Manhattan Project but did not advocate using nuclear weapons as an overt act of war. With an explosive rock score and a historically accurate over-story, Atomic makes its regional premiere Friday, November 9, at 7:30 p.m. at the Bug Theatre, 3654 Navajo Street. Courtesy of Equinox Theatre Denver, the show is directed by Patrick Brownson, with an enthusiastic local cast. Performances continue on Friday and Saturday evenings through December 1; find tickets, $20, and more information at equinoxtheatredenver.com.

Overcoming a spiral into addiction that culminated in felony charges, jail time and rehab would be commendable enough. But Tiffany Jenkins felt compelled to chronicle her struggles with recovery and new motherhood and unwittingly became a source of inspiration — and cathartic laughter — for more than two million followers. After years as a reliable producer of viral videos and best-selling books, Jenkins is taking her oversharing act to the stage with This Show Is Awkward AF, an evening of new stories that includes the fearless honesty and irreverent wit that fans have come to expect. Experience the impropriety of sobriety at 8 p.m. Friday, November 9, when Jenkins takes the stage at the Paramount Theatre, 1621 Glenarm Place; find tickets, $34.50 to $44.50, and VIP passes (with a photo op), $79.50, at altitudetickets.com.

The punk purveyors at the Lion's Lair will revive one of the venue's most popular events when they cede control of the ones and twos to activist, spoken-word artist and erstwhile Dead Kennedys frontman Jello Biafra for his Incredibly Strange Dance Party! Serving up heaping sonic helpings of obscure punk, soul, surf and garage rock, Biafra's benediction also pays tribute to the Denver Film Festival premiere of Industrial Accident: The Story of Wax Trax! Records and provides supplemental tunes courtesy of DJ Brian Polk. Support local record stores while rubbing shoulders with a punk-rock legend when Biafra returns to the Lion's Lair, 2022 East Colfax Avenue, for a pair of 9 p.m. performances on Friday, November 9, and Saturday, November 10; find tickets, $15, and details at brownpapertickets.com.