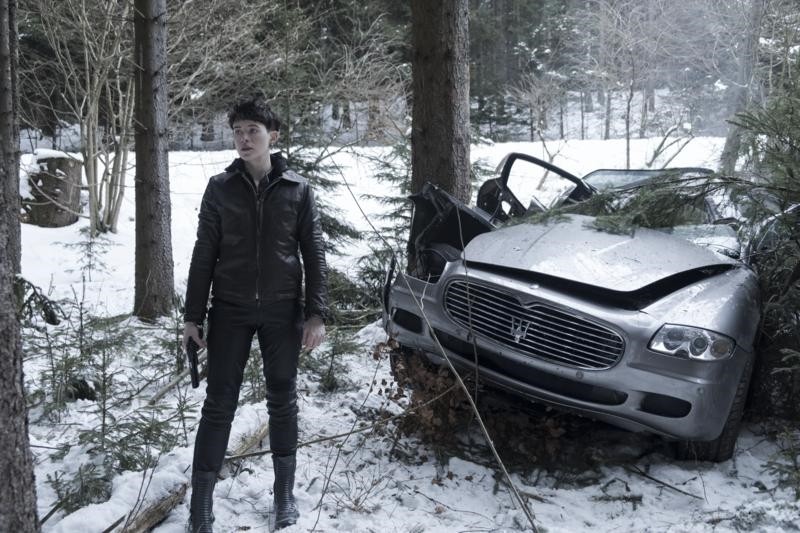 Nadja Klier/Courtesy of Sony Pictures
Claire Foy stars as Lisbeth Salander, the black-clad uber-goth avenging angel who battles a ruthless international gang of criminals called the Spiders, in The Girl in the Spider’s Web.
The funniest moment in The Girl in the Spider’s Web comes when Lisbeth Salander (Claire Foy) briefly wears a pink hat. She’s trying to get away from her pursuers at a crowded airport, and she lets them see her wearing the hat. Then, once they’re looking for a girl in a pink hat, she takes it off and gives it to someone else. What’s comic isn’t so much that black-clad uber-goth avenging angel Lisbeth would ever deign to wear pink; it’s that anybody in this film would. A wide shot of the crowd at the airport reveals a sea of dour grays, browns, blues and blacks. And, yes, one tiny pink hat.

If only the rest of the movie were as inspired. By and large, this latest entry in Lisbeth’s adventures — after Noomi Rapace achieved stardom with three films in Sweden, and Rooney Mara headlined an American remake of The Girl with the Dragon Tattoo — offers a drab genre piece that’s more like an attempt to establish a James Bond-like franchise for Lisbeth than a compelling exploration of the character. Everything has been watered down from those previous efforts: the intensity of the hero, the sense of sexual danger, the violence, the mood. Even the story feels off the shelf.

Here, played by Foy with dutiful glumness, Lisbeth is recruited by a programmer who has designed a program called Firefall that can remotely access any country’s nuclear arsenal. (“I realize I’ve created an abomination,” he mutters. You think, fella?) After some byzantine hacks, a huge explosion and one grisly murder, our girl finds herself doing battle with a ruthless international gang of criminals called the Spiders. Among them is a face from her past: her own sister, Camilla (Sylvia Hoeks), long thought dead, whom Lisbeth abandoned as a young girl when she fled their abusive torture-perv monster father. Also along for the ride are Lisbeth’s regular sidekick, hotshot investigative journalist Mikael Blomkvist (Sverrir Gudnason) and Edwin Needham (Lakeith Stanfield), a hacker turned NSA agent who travels to Sweden to track down what happened to the Firefall program.

Lisbeth’s backstory has always been the most compelling thing about these tales. Her baroque punishments of abusive men may offer a satisfying dose of vengeful wish fulfillment, but the twisted manner in which she got to that point and the psychic scars she still carries distinguish her from the familiar carousel of detectives and secret agents. She’s meant to be menacing, unpredictable. But Spider’s Web makes the double mistake of bringing her down to earth and then not actually giving her all that much to do.

The film may aspire to Bond-age, but what it really achieves is lesser Jason Bourne-age, just with more leather. Lisbeth and others walk a lot in this movie, talking on cell phones as they speed-step through corridors and apartments and airports. There’s nothing inherently wrong with that, but when you’ve got such an interesting character, it’s a waste to make her just do the same damn thing Matt Damon does whenever he’s looking for a payout.

This Girl’s not all a bust. Uruguayan director Fede Alvarez brings the Scandinavian chill with muted colors, static shots and icy, forbidding settings. Lisbeth’s is a world that can’t find a happy medium; everything is either really empty and cold or throbbing with mangy punk nihilists. Spider’s Web can’t quite match the visual splendor of David Fincher’s Dragon Tattoo, but it still looks pretty great.

The movie also rallies at the end, with a chase and shootout in a large, ominous mansion that holds an especially creepy place in Lisbeth’s heart. Cutting between different rooms, as well as what’s going on outside, Alvarez builds a nice, suspenseful little head of steam. And the final face-off between Lisbeth and her sister is a high point, in the way it brings the focus back to the disturbing psychodrama of this broken family. Will it be enough to justify yet another sequel? Who knows? If the filmmakers do return to the story of Lisbeth Salander, then I hope they actually return to the story of Lisbeth Salander.