Broncos Fans on Twitter Rip the Team for Finding a New Way to Choke vs. Texans 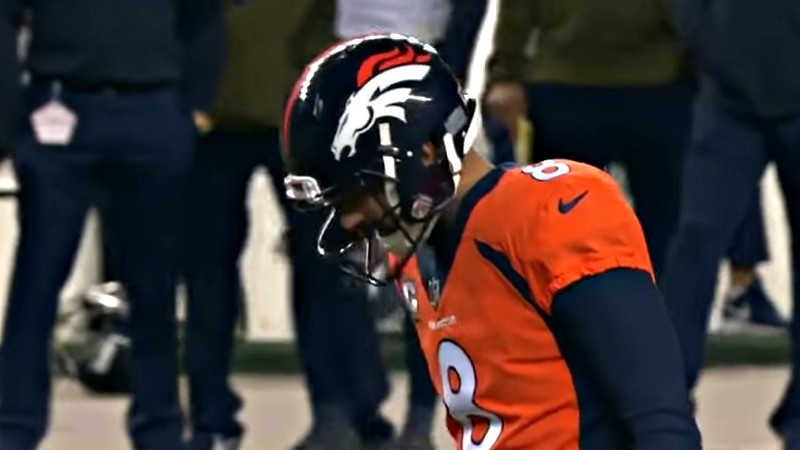 NFL via YouTube
Broncos kicker Brandon McManus readying himself to miss a boot that would have won a game for his squad.
"Broncos season was all but lost already, but McManus just closed the coffin."

This line from a tweet following the Denver Broncos' 19-17 loss to the Houston Texans on November 4 pretty much sums up the game, whose conclusion was a microcosm of the 2018-2019 season to date.

The Broncos' defense managed to hold down a high-flying squad led by Deshaun Watson and including new signee Demaryius Thomas (who caught three balls for 61 yards in his Houston debut), giving quarterback Case Keenum and the Denver offense every chance for victory. But the Broncos squandered too many opportunities and gave away points as usual. Shockingly, Keenum didn't throw an interception this week, but a Devontae Booker fumble in the second quarter led directly to a Texans TD and a 13-3 lead.

Afterward, however, Texans kicker Randy Bullock missed the extra point, opening a door for Denver that the squad repeatedly failed to walk through. The Broncos' own field-goal specialist, Brandon McManus, couldn't hit a 62-yarder toward the end of the first half thanks largely to poor strategy on the part of embattled head coach Vance Joseph. And questionable play-calling reared its ugly head again as the second half wound down, leaving McManus with another long shot to win the contest — and while his attempt covered the 51-yard distance with length to spare, it sliced right, and the Broncos headed to the locker room as losers again.

Not every fan blamed the defeat on McManus, who'd sealed a Broncos W against the Raiders back in September under similar circumstances. Indeed, as you'll see, plenty aimed their invective at Joseph, whose seat couldn't be hotter if it was riding on a solar flare. But a certain word for constricted breathing also pops up frequently in our choices for the twenty most memorable tweets about the results, on view below.

Hope they don't make you choke. But the last one, which bizarrely links the Broncos' skid to legal marijuana, just might.