Growing Up and Growing Off With Former Cannabis Critic Jake Browne 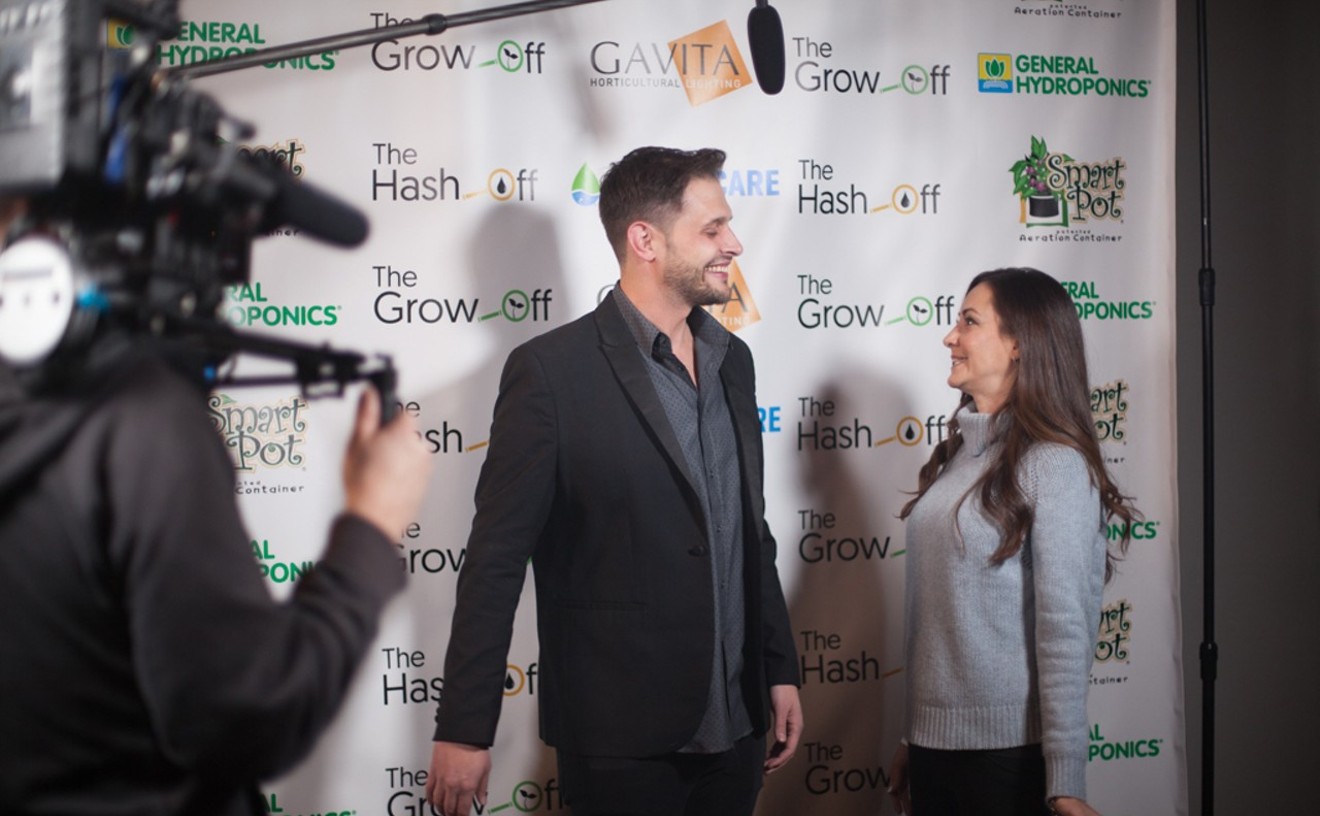 Jacqueline Collins
Jake Browne and cannabis celebrity Dr. Dina at a Grow-Off party.
Jake Browne, former strain critic for the Cannabist, didn't spend much time moping after the publication's staff was dismantled earlier this year. He wanted to focus on his own growth — and everyone else's, for that matter.

Browne and his fiancée, Samantha Taylor, have been expanding their unique cannabis cultivation competition, the Grow-Off, outside of Colorado since they founded it in 2016, with contests in California that match commercial growers against each other with the same mystery genetics; they also have a home-grow competition going on in the South. Westword chatted with Browne to learn more about his appreciation for fine herb and the difficulty of cannabis cultivation.

Westword: How did you come up with the Grow-Off concept?

Jake Browne: I think it started with my fiancée and partner, Samantha Taylor, and our mutual love of competitive cooking shows. One night we were stoned and thought, "We should make the Iron Chef of weed." But I had been judging competitions as the pot critic for the Denver Post and hated everything about the process — mainly, how ridiculously stoned I'd be after smoking what everyone considered their best cannabis. The lightbulb went on when we realized that you could scientifically test for the flavor — or terpenes — in the plant without anyone having to smoke a single bowl. That objective approach was what set us apart from day one. It's a cannabis competition where no one gets high.

We have two competitions running right now in California: licensed farms in Northern California and home growers down south. Even with the regulations out there, Humboldt County, California, is still predominantly generational family farms where you see kids with watering pails running around, because they've grown up around cannabis. There's no stigma. I remember a guy called me up and was upset because our first event wasn't kid-friendly, saying, "It's legal for me to have my twelve-year-old digging weeds." I wanted to tell him that I wasn't so sure of that [laughs]. It's a region I feel for, because it seems like they're going to be legislated out of existence, not to mention battling what seems like a massive fire every year.

With home-growers, it's totally different. Everyone is leery after dealing with the law enforcement whack-a-mole that's been going on in Southern California, but they also have a passion that our commercial growers sometimes have beaten out of them. We're offering them an opportunity to build a résumé and interview with large companies after the results are in, so there are very real stakes for independent growers who want to take the next step. We desperately want to bring the same concept to Colorado, but testing regulations have stymied that so far.

What have you learned about cannabis cultivation since starting the Grow-Off?

The biggest thing is that cultivators don't get the respect they deserve. If dispensaries were restaurants, we have a bunch of hype around the people who invested in the kitchen or the amazing waitstaff, but no one is talking about the chef that actually puts it on the plate. Owners and budtenders are great, don't get me wrong — but without growers, there wouldn't be an industry. I always hear that Dispensary X has great herb, but no one has a clue who is producing it.

It's not as simple as watering plants and making sure the lights are on. These rooms need to be damn near sterile, so there's constant cleaning — but they also need to be inspecting plants, so there's an aspect of field biology. And they need to meet these arcane regulations, so they're also compliance officers. That's just scratching the surface. If you know a grower, hug them.

Browne and his fiancée, Samantha Taylor.
Lisa Siciliano/Dog Daze Photography
How does growing cannabis differ from state to state? Are there different techniques, genetics, environments at play in Colorado compared to California?

Legalization has killed Colorado in terms of competitiveness. You remember the Simpsons episode where they film Radioactive Man in Springfield and the town invents all these ways to gouge the movie company? That's what's happening right now. The state won't even acknowledge that there's a boost in tourism from cannabis. Then you look at a state like Oregon, where they work with facilities to give rebates for using energy-efficient lighting, and you see it's night and day. Here it's being taxed and regulated to death, and you have companies making less and less on a pound every month. There's no legal process to introduce new genetics here. Innovative techniques don't meet the plucked-from-thin-air safety numbers they established. How is that sustainable?

California is cocky right now, and they have every reason to be. It's hard for me to keep up with all the new strains they're developing, and the brands look much more mature than when I started here. I wonder where they'll be in five years, though. It's easy when you haven't had to change your packaging and labeling four times and there aren't mega-dispensaries picking up licenses left and right. The vibe there is very much "I'd rather pay the fine than worry about compliance," and that catches up quickly when real regulation hits.

What are you favorite strains for flavor? What about for effect?

I fell in love with Mendo Breath out in California, but then found Cactus Breath at The Herbal Cure, and it’s unlike so much of what’s out there. It’s what I imagine the Vlasic Pickle Stork would taste like if it lived in an old aquarium, and for some reason, that appeals to me. Effect-wise, I’m digging the Golden Goat we grew this year. It was our first shot at growing, so it turned out awful, but it’s nice to have a “session IPA” of cannabis, if you will. We can smoke it ad nauseam, and it’s always goofy and light. I call it my old-man weed.

What would you like to see more of in the local cannabis scene?

Representation, hands down. People of color, women, the LGBT community, people with disabilities are all critical parts of other scenes we visit, but here it seems like they’re invisible. We’re working on a program to help place candidates with real apprenticeships — not unpaid-intern bullshit — to learn how to cultivate cannabis. We can’t keep ignoring the fact that these communities suffered greatly from the War on Drugs.

When it comes to cannabis itself, I’m still dying to see more low-potency, high-terpene cannabis on shelves. When it comes to baby boomers or even millennials who are canna-curious, we need to give them better options than jet fuel or rocket fuel. Maybe we need a reverse Grow-Off?