No Room at the Inn: Homeless Advocates Gather at City Hall on Thanksgiving Eve 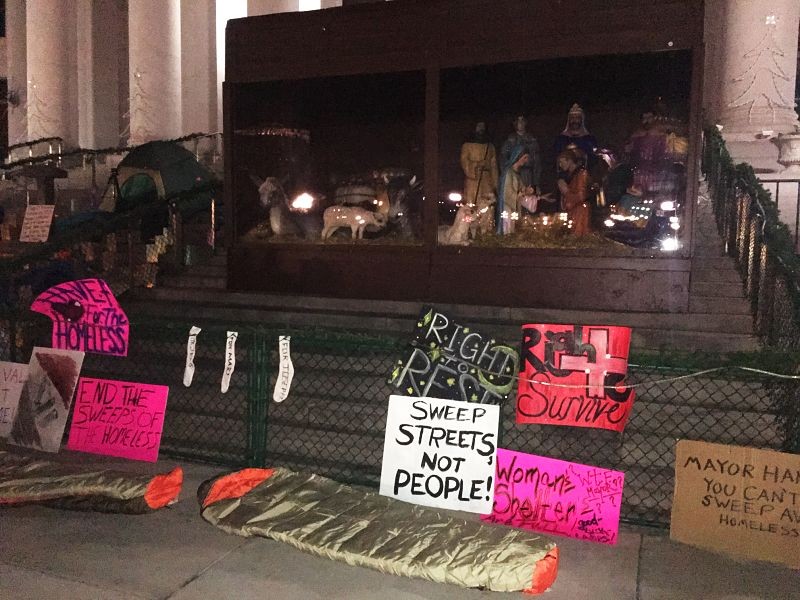 Westword
No room at this inn.
On Thanksgiving eve, a hundred people gathered at the steps of the Denver City and County Building, sharing a meal and also their thoughts about the city's approach to those who are experiencing homelessness. Enough is enough, they agreed.

Speaker after speaker — including several candidates for Denver City Council — described how the city had ramped up the homeless sweeps over the past several weeks, in some cases confiscating blankets, despite a vow not to do so after a video of Denver police doing just that went viral almost two years ago. That's why the organizers were hoping to collect 319 sleeping bags, a number representing the "3195 people who have been contacted by police for violating the survival ban (known as camping ban) in the last nine months and forced to move along to nowhere."

They also shared a letter that thirteen community organizations had sent to Mayor Michael Hancock and the members of Denver City Council on November 20:

We, the undersigned organizations, call on the city of Denver to immediately act to protect the rights, dignity, and survival of people without housing in Denver with the following immediate steps:

The past 4 weeks of police sweeps across the city of Denver, directed by you Mayor Hancock, can be stopped just as easily as they were started: simply by the direction of the Mayor. We ask you to hear the cry from the streets calling for these move along orders to stop. Cease and desist.

The city of Denver owns plots of land throughout the city that are currently sitting vacant while the city is chasing homeless people around and out of every visible square inch. We demand that public assets be used for the public good and accordingly that the city designate at least one vacant plot where homeless people can find rest and safety in tents, vehicles, or the like right now this winter.

Until there is actual attainable low-income housing enough to meet the need of the thousands of people, with numbers growing each day, who can’t afford Denver’s rents, people will be living on the streets of Denver. Shelters are not an option for hundreds of people. The city must hear the cry of people without housing and let people cover themselves from the winter weather and be seen.

"Denver has used measures of force to try to push homeless people out of sight, out of mind," said Terese Howard of Denver Homeless Out Loud, standing on the steps of City Hall.

That the gathering was held just feet away from the building's annual holiday display, which includes a depiction of the stable where Jesus was born because "there was no room at the inn," was not lost on the gathering.

"We worship a homeless man on Sunday and send them to jail on Monday," said PJ D'Amico. "Mr. Hancock, time is up."

He wasn't the only one to refer to May 7, when not only will Mayor Michael Hancock and incumbent councilmembers will be up for re-election, but the Denver Right to Survive Initiative, which would repeal the camping ban, will also be on the ballot.

While Hancock and numerous councilmembers came in for criticism, members of the Denver Police Department received some rare praise, for their help in quickly arranging for organizers to set up their own display of sleeping bags, tents and signs at the City & County Building.

That display is down today, but homeless advocates will be back in three weeks, to hold their annual vigil for those who have died on the streets over the past year.