Find the Spirit of the Wild, Wild East at the Frontier Club in Aurora

Sarah McGill
The Frontier Club is way out east on East Colfax Avenue in Aurora.
As a lover of Colfax Avenue, I find myself exploring both the western and eastern reaches of one of Denver's best-known streets (as well as its urban center). A friend and I decided to meet at a bar on the easternmost end of Colfax on a recent Sunday. I kept going so far down the long road that signs for Limon began to appear, and then I finally arrived at my destination: The Frontier Club, at 18881 East Colfax Avenue.

The Frontier Club is set back off the street, with a large parking lot shared with Corral Western Wear and a liquor store. In front of the industrial-looking building, a large patio, complete with an outdoor bar, stands behind a beige fence.

Entering the bar, I walked into a spacious, open area filled with Broncos fans watching the game on a Sunday afternoon. My friend was waiting at a table near the bar, and we surveyed the place together. The theme is definitely Western, with several decorative pieces carved in wood, horseshoes on signs and pictures of horses, as well as the usual neon bar signs. Behind a projection screen extending down from the ceiling, a slightly raised stage encircled by corral fencing stood vacant, but signs indicated that on weekends, the stage is filled with musicians. Hanging on the fence was an American flag made of twinkling lights illuminating the dark space in red, white and blue.

We could tell that part of the glue that holds this place together is owner Mitchell Marina, who greeted us and told us a bit of his story when he wasn't getting flagged down by regulars eager to greet him. Marina knew almost everyone there, and pointed out that his group of regulars has shifted from mostly cowboys and bikers to a whole mix of folks representing the changing neighborhood. 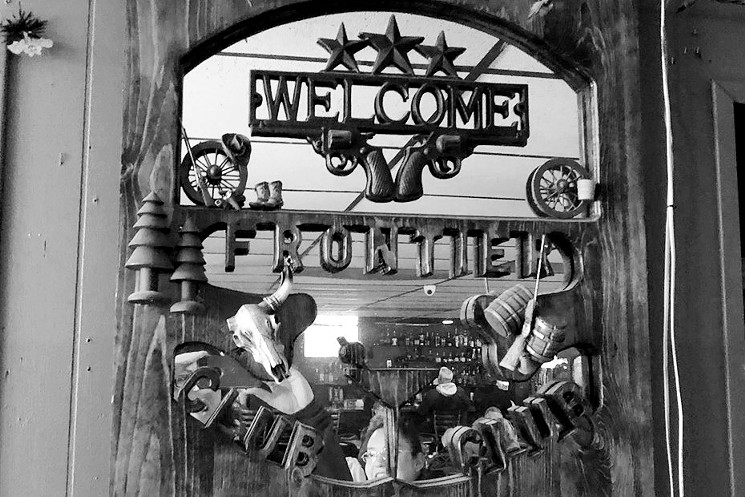 This mirror and coat rack combination captures many of the Frontier Club's themes.
Sarah McGill
Marina, who also runs Noonan's Sports Bar and Grill in south Aurora, has owned the Frontier Club for sixteen years, but the old building was a bar long before he was in the picture. It became the Frontier Club in 1987, owned by a couple of different families in succession until he took over. Back before that, during the ’60s and ’70s, different sections of what now is all part of the bar used to house various businesses such as a feed store, a video rental shop, a pizza place and even an underground bar without a liquor license. This area of town truly was a frontier for the expansion of Denver and Aurora, and there is still plenty of open space, with farms and fields as well as cul-de-sacs full of homes. About ten years ago, Marina recalls, a customer even brought a horse inside the bar. There also used to be hitching posts for horses out front, but the landlord got rid of those a few years ago, and nowadays it's mostly just people inside the Frontier Club, not horses.

The eclectic dinner menu includes Mexican dishes, pizza and New York Strip steaks, plus a healthy smattering of Colorado fried foods. Breakfast is also served daily until 2 p.m. at the Frontier, which opens at 10 a.m. on weekends and 11 a.m. on weekdays. For the second time in recent bar visits, I noticed Rocky Mountain oysters as an appetizer choice, and I once again opted not to eat any fried balls. Instead, my friend and I split some nachos and an appetizer platter with fries, wings, jalapeño poppers and fried pickles. You can't really go wrong with any of that, and the crispy fried pickles were a highlight, along with the jalapeño poppers filled with just the right level of gooey cream cheese. 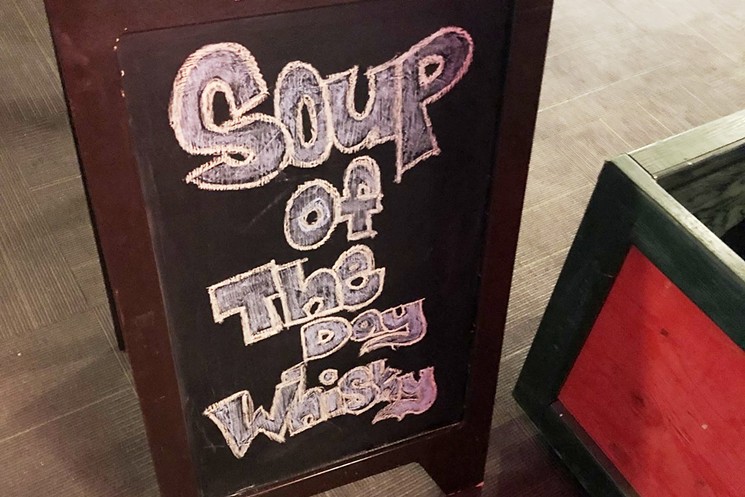 A little bar humor.
Sarah McGill
Our server deftly managed the constant stream of thirsty Broncos fans while in the back corner of the bar, tucked away in a quieter spot with fewer TVs, a serious poker tournament was going on. Card games are a big deal here; Wednesdays and Fridays are also poker nights. Just in front of the poker game, there were Big Buck Hunter and Golden Tee games as well as a vending machine, an old-school tabletop Pac-Man system, and several pool tables with a few guys playing. On the other side of the bar, there were dart boards occupied by a few college-age guys. For additional entertainment, Marina hosts a few other weekly events: Rock, country and dance-music bands get the party started every Friday and Saturday; on Thursdays, karaoke singers take the stage; and on Tuesdays you'll find "Tri-oke," a mixture of trivia and karaoke.

On the frontier of Aurora, the Frontier Club brings folks together for food, drinks, music, poker and visiting friends who come from all over the widespread neighborhood. It's a little bit Western and a little bit Aurora, even if no one saddles up to ride into the bar anymore these days.