New Recruit Bernie Sanders for 2020 Movement Based in Colorado 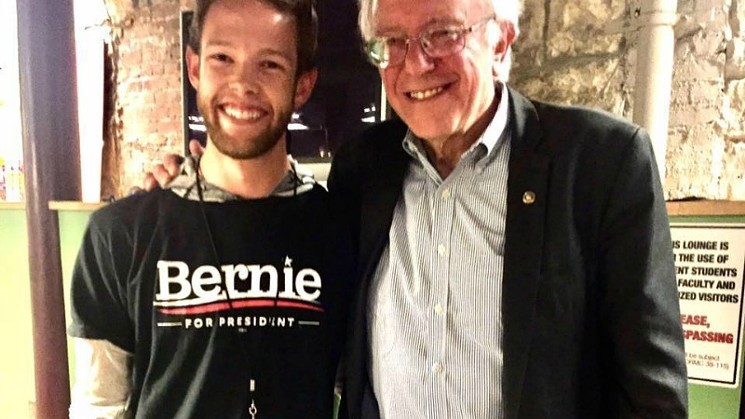 Facebook
Spencer Carnes with Bernie Sanders circa 2016.
Organizing for Bernie, an effort to persuade Vermont Senator Bernie Sanders to run for the presidency in 2020 that launched today, is based in Colorado.

As first reported by Rolling Stone, leaders of the enterprise include Dulce Saenz, who oversaw Sanders's 2016 campaigns in Colorado and Washington state, plus Colorado Caucus director Mandy Nunes-Hennessey and Spencer Carnes, who headed up the Buffs for Bernie group at the University of Colorado Boulder.

We interviewed Carnes in October 2016 for a post headlined "How Buffs for Bernie Co-Founder Became Major Organizer for Hillary Clinton." And while he was energetically backing Clinton at the time of our conversation, he remained a huge fan of Sanders.

"I think the Bernie Sanders campaign inspired young people to take part in the political process," he told us.

After his initial presidential vote in 2012, Carnes spent much of the 2014 cycle interning for No Labels, a political organization that works to find nonpartisan solutions to the nation's challenges. Then, in July 2015, he got deeply involved in the pro-Sanders movement.

"I started volunteering with a couple of colleagues at the CU Boulder campus, and we launched Buffs for Bernie in August," he said. "We brought Bernie Sanders to campus that October and were knocking on doors before the campaign really got started in Colorado. And for my last semester of college, I got a really cool opportunity to work as a field organizer."

Two favorite sons of Colorado are said to be thinking about a 2020 presidential bid: Governor John Hickenlooper and Senator Michael Bennet. But neither of them have the national name recognition of Sanders, who recently said he would consider another White House run.

On its website, Organizing for Bernie discloses that it is "a Federal PAC, and is not connected to Bernie Sanders or his campaign." The outfit hopes to create "a people-powered campaign meant to recruit Senator Bernie Sanders as a presidential candidate in the 2020 Democratic Primary and lay the groundwork for a successful campaign operation. Since 2016, Bernie's political revolution has continued to grow and fight for progressive values at every level of government. Now it's time to organize for Bernie! Help us achieve our mission by signing the petition."

The petition and its text are linked below.