Reviewed: The Oddities and Obsessions of John Fudge

Courtesy Rule Gallery, photo by Valerie Santerli
“Count Drac” (from left), “No Garlic Will Help” and “Cathy Jean and the Roommates,” all by John Fudge.
John Fudge, who passed away in 1999, was an artist’s artist, the ultimate insider painter of the 1970s and ‘80s, accorded the respect of a master by his peers. While his work was undeniably technically accomplished, it was his odd taste in subject matter that really boosted his status.

Looking at Double Take: John Fudge, now at Rule Gallery, it’s impossible not to notice that he was a very early advocate of conceptual realism, twenty years before it became popular in the 1990s. Maybe that’s why Fudge was primarily appreciated by people in the art scene back then and did not garner a broader audience until now, with this show sparking a full-fledged revival of interest in his super-strange work.

One of the last exhibits curated by Robin Rule before she died was a John Fudge solo at Pattern Shop Studio mounted back in 2012. The pieces in that show had been culled from local collectors, notably fellow artists like Clark Richert and Andy Libertone — as I said, Fudge was an artist’s artist. The paintings in the current Fudge display at Rule come directly from Fudge’s estate, and nearly everything has been out of public view for decades. To put it together, the show’s curator, Valerie Santerli, went to Portland, Oregon, where Fudge’s widow, Jane Fudge, a former assistant curator at the Denver Art Museum (and former Westword contributor), now lives. She picked out the works for this tidy exhibit, along with many others now stored in the gallery’s stacks. 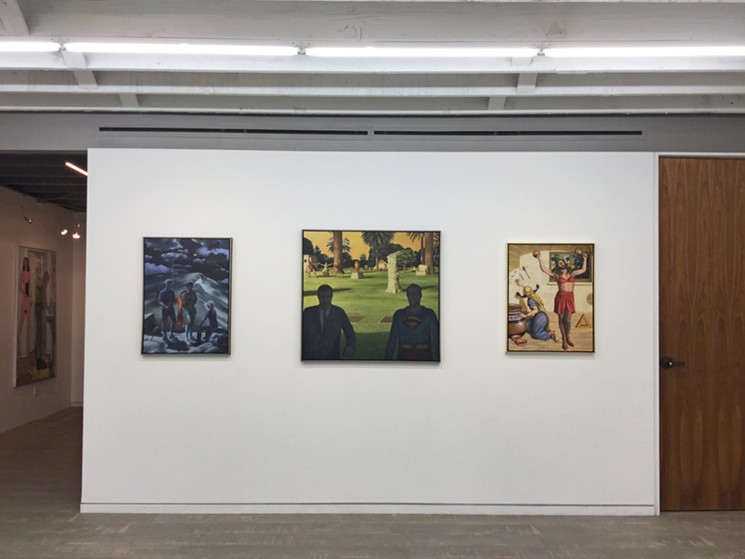 “Bob and Teenage Connie in Tibet” (from left), “Everything in One Place” and “Gotta Dance, Gotta Sing,” all by John Fudge.
Courtesy Rule Gallery, photo by Valerie Santerli
Though Fudge fooled around with cartoon-ish imagery early on, by the end of the ’60s he'd hit on his signature approach, in which he used a crisp illustration to render preposterous situations — in the case of 1969's “No Garlic Will Help,” a guy is pumping gas while Batman’s symbol approaches from the distance in the back left. Fudge was clearly mashing up pop art and traditional realism in this piece and most of the paintings that followed. And though not a photo-realist, he was something of a hyper-realist.

Fudge was interested in being outrageous, and thus causing outrage. In 1988's “Gotta Sing, Gotta Dance,” he put a familiar depiction of Christ’s face on the body of a sexy 1940s dancing girl. In addition to lampooning religion, Fudge also repeatedly made references to Nazis. For example, “You Know the Ending,” a 1975 painting, depicts a weeping Nazi soldier seated in a jail cell, an alligator biting his right boot.

“Step Up to Big Pay” (from left), “Night Attack on the Pyramid at Maidum” and “You Know the Ending,” all by John Fudge.
Courtesy Rule Gallery, photo by Valerie Santerli
Given the enigmatic content of Fudge’s narratives, it’s difficult to determine what the paintings are about. This came up during his lifetime, and Rule's support materials offer this explanation from Fudge: “I want to give the viewer something to think about as well as something to look at. I want to serve up a meal, not just a glass of water.”

That sensibility inspired the show’s title, Double Take: Fudge wanted viewers to look at his work, then look at it again.