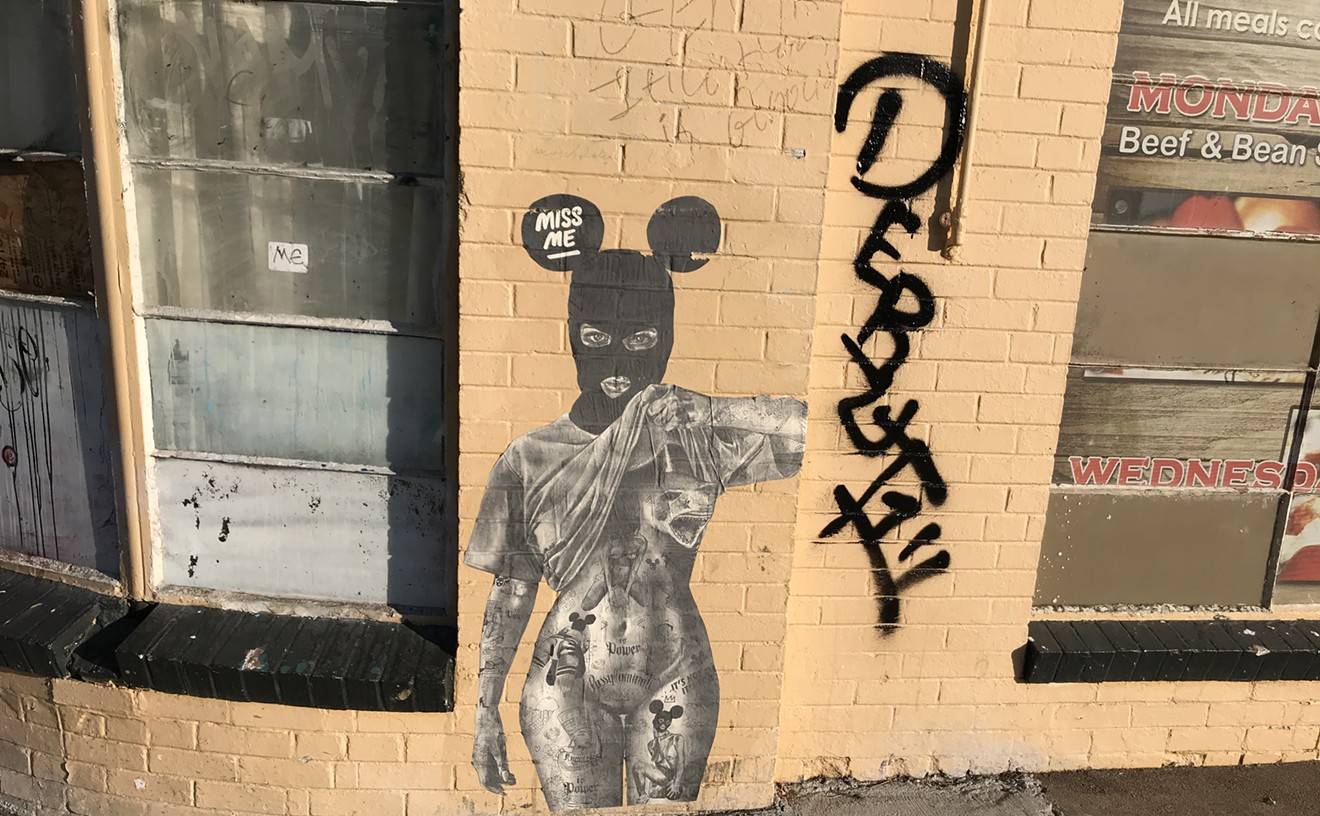 Kyle Harris
Graffiti at Colfax Avenue and Franklin Street.
From a distance, the wheat-pasted figure looks like an Israeli Defense Force soldier in a Zapatista-style ski mask with Mickey Mouse ears, some sort of anarcho/punk-inspired agitprop. But up close, the image is clearly an inked-up, half-nude woman: high-concept art or demonic erotica?

While Colfax Avenue is no stranger to drugs and debauchery, this piece might top the list of things that would cause parents to cover children's eyes, drivers to swerve and pedestrians to sneak a glance, blush and turn away. Too bad. The image demands a long look, then inspires a hunt through the Internet.

The ski mask alone might suggest some sort of sadomasochistic scenario; the Mickey Mouse ears could be a first-semester art school student's take on how women's bodies are sold for entertainment. Combine the mask and ears, and the calculation becomes confusing — something that might appear on a Crass album from the late ’70s and then get over-explained through a preachy rant.

The text on this print doesn't help. On top of the ears are the words “Miss Me” — no period, no question mark. The body hosts tattooed phrases like “PussyIlluminati,” “Knowledge Is Power” and “It’s Not Me It’s You.” Tattoos of the woman's nude figure mark her own body, images showing her in various poses, wearing the ski mask and the Mickey Mouse ears.

Knowledge may be power, but you have to decode the markings to understand the image and gain either. Yet doing so is a dead end....until you get to the Internet.

Plug the phrases tattooed on the image's body into Google, and suddenly a world of hashtags, interviews, videos, an Instagram account and a website come up.

The image turns out to be a popular one, "The Portrait of a Vandal," pasted around the world by the Montreal-based graffiti artist who goes by the name MissMe. According to Vice, she's a feminist and former ad woman who has been creating work about women owning their sexuality for years. The whole campaign — legal or not — is savvy marketing.

The image is a self-portrait: When MissMe comes aboveground, she wears the mask to cloak her identity. She had a commissioned project at Comal and was in Denver in November selling her work at a RiNo pop-up shop, giving a talk at Zeppelin Station, and likely pasting unsanctioned prints across town — including the one on Colfax Avenue. Her work has become a selling point for corporations looking to appear edgy and counter-cultural, eager to buy her artsy cred.

Denver, which is quick to scrub away illegal graffiti, in recent years has added to its aesthetic with commissioned street art that gives all the ugly new architecture a veneer of authentic urbanity. That the wheat-pasted image on the side of Denver Fresh Mex hasn't been been painted over by Denver's anti-graffiti crews is a testament to MissMe's craft.

MissMe makes Instagram-friendly graffiti art mired in narcissism — masked or not — in which objectification isn't something done to her body but something she does to herself, in an act intertwined with selfie culture and social media. She isn't simply commenting on the objectification of women; she is turning herself into a product to be sold. Even her crimes become commodity.

And that's just the ’fax.