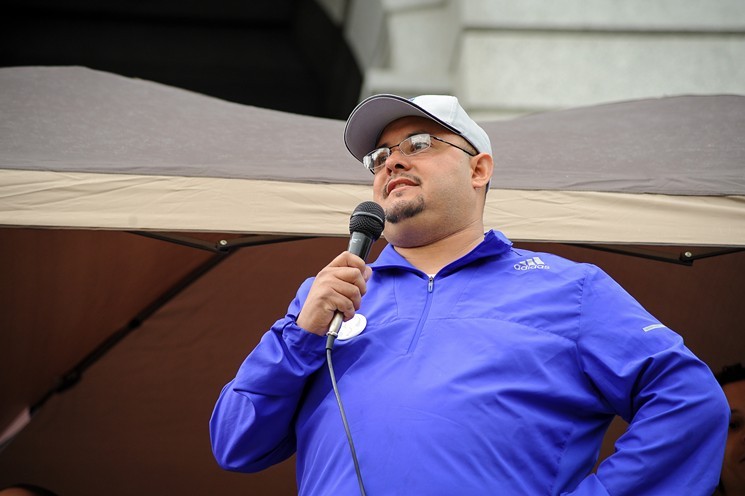 Erin McCarley
Joe Salazar has a new job in the new year. The former state representative is now the executive director of Colorado Rising, the group behind Proposition 112, the fracking setback initiative.

During his three terms in the Colorado Legislature, Salazar tried to more tightly regulate Colorado's oil and gas industry. He introduced such bills as the Regulate Oil Gas Operations Protect Public Safety, which would have codified a Colorado's court's decision in the Martinez case, which argued that the state's oil and gas regulator must prioritize public health and safety when issuing fracking permits.

“I am excited to have Joe on board as Colorado Rising’s executive director. Joe brings great energy, a proven track record, knowledge, skills, and an understanding of the urgency around environmental issues. Colorado Rising is committed to protecting communities from being exposed to explosive and toxic chemicals, and to stop industrial oil and gas activities from infiltrating our neighborhoods. Joe is the right person to lead that charge,” says Colorado Rising's president, Tricia Olson, in a statement announcing the appointment.

Proposition 112 called for new oil and gas developments to be at least 2,500 feet from certain "vulnerable" areas, including schools. The measure failed, but Colorado Rising will continue to fight the oil and gas industry in 2019 with a new chapter dedicated to litigating cases "against bad government actors and abusive oil and gas companies that harm the health, safety and welfare of the public and the environment."

Salazar, a native Coloradan, started his career as a civil rights and criminal investigator for the Colorado Department of Regulatory Agencies. After earning his law degree from the University of Denver, he started his own firm that focused on employment law, civil rights, constitutional law and federal Indian law. He ran for attorney general in 2018 but lost the Democratic primary to Phil Weiser.

Though they battled each other in that primary, Salazar is likely to find an ally in new AG Weiser, a Democrat whose priorities include protecting the environment. And while Governor-elect Jared Polis has yet to formally announce his environment platform, he's hinted at making climate change a priority.

Salazar and the Colorado Rising team will meet at the State Capitol at 7:30 a.m. Friday, January 4, opening day of the legislature, to demand a moratorium on new drilling until a state-sponsored health assessment is complete and new rules based on its findings are enacted.

“It is undeniable that human activity, particularly activity from the fossil-fuel industry, has adversely affected our climate. It also is undeniable that we are obligated to take bold and progressive action to mitigate the damage we have caused. As demonstrated this last election cycle, Colorado Rising was at the forefront of action to protect our communities and our environment,” says Salazar.