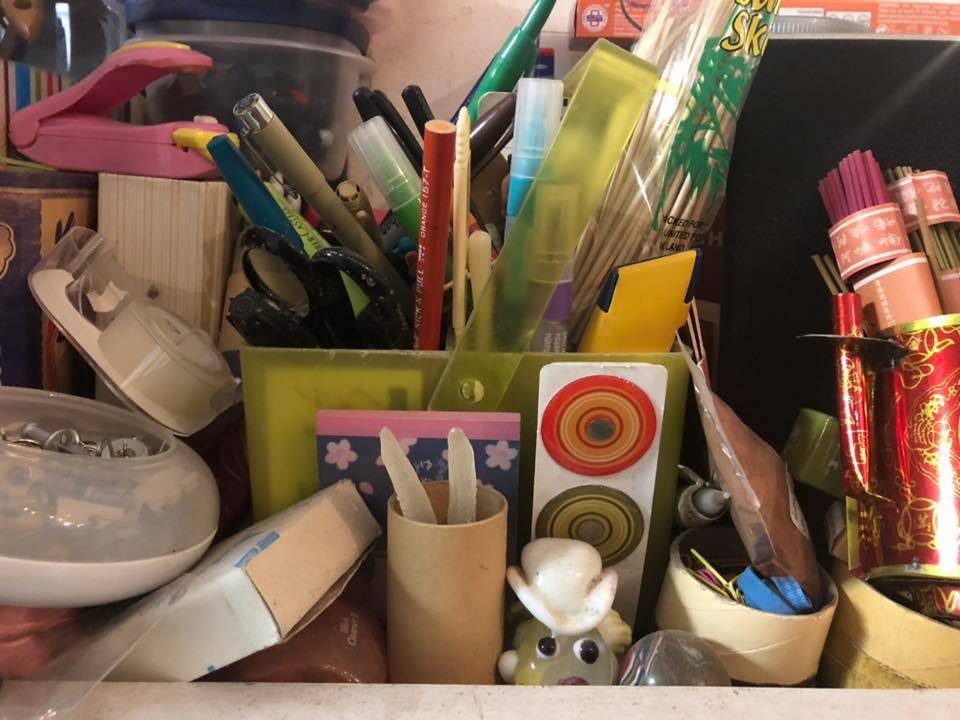 Tameca Coleman
A sneak peek at artist goods up for grabs at the Massive, Epic De-Hoarding Sale on January 5 and 6.
Put on your art-colored glasses for the first Friday of 2019, an occasion marking another smashing year of gallery-going. Shows this weekend cover the gamut of artists young and old, as well as alternative spaces and exhibition platforms. Get started with these twelve events and gear up for things to come. 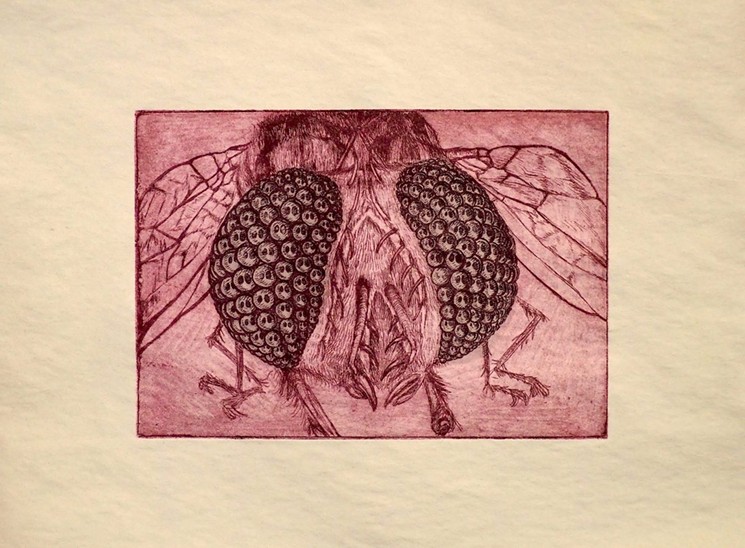 An etching by Katrina Moore.
Katrina Moore, Art Gym
Allie Sutterer and Autumn Thomas, Undoing Structure
Katrina Moore, I See Myself in You (Show Me More)
Holly Nordeck, On Your Left
Art Gym Denver, 1460 Leyden Street
January 3 through January 25
Opening Reception: Thursday, January 3, 5 to 8 p.m.
Art Gym will be packed to the rafters with new art for a new year, with three shows opening on the first Friday of 2019: First up is Undoing Structure, a culminating exhibition by young artists Allie Sutterer, a photographer and fiber artist, and Autumn Thomas, a sculptor and printmaker, both winners of the art facility’s 2018 Create Award, a six-month residency. Katrina Moore’s I See Myself in You (Show Me More) enlarges tiny images of insects and other minutiae in intricate etchings, and Holly Nordeck’s On Your Left uses film and stills to document and comment on the amount of litter left along Colorado highways. All four artists will give talks scheduled throughout January; find a complete schedule under events at artgymdenver.com.

A mural by JTOH and high school students for CHAC's Next Generation exhibition.
Journey Through Our Heritage
The Next Generation: Youth in Arts
CHAC Gallery, 222 Santa Fe Drive
January 4 through 18
Opening Reception: Friday, January 4, 5 to 9 p.m.
Third Friday Showcase and Open Mic: January 18, 5 to 9 p.m.
Denver’s Chicano Humanities and Arts Council has been around for forty years, founded by a group of young upstart local Chicano artists aiming to preserve culture while pulling together citizens of the Northside/Westside communities. As the years passed and the gallery moved from place to place, some of the founders’ children joined in, and now, an even younger generation is knocking on CHAC’s door, bringing new life to the space in its new home at Second Avenue and Santa Fe Drive. Curated by Jay Jaramillo, the artist son of original CHAC member and muralist Jerry Jaramillo, The Next Generation welcomes work by students from local high schools, created in collaboration with Metro State University of Denver’s Denver Chicana/o Studies Journey Through Our Heritage program. Celebrate youth artists at the opening and come back on Third Friday for a live spoken-word open mic.

Retrospective
Edge Gallery, 7001 West Colfax Avenue, Lakewood
January 4 through 13
Opening Reception: Friday, January 4, 6 to 10 p.m.
’Tis the season for group retrospectives at the co-ops, to kick off a new year by offering a whisper of what to expect from gallery members in individual shows scheduled throughout 2019. At least two 40 West co-ops are making a First Friday splash by opening member shows in conjunction with the Lakewood creative district’s monthly art walk; at Edge, you can review past works and dream of what’s next.

Pirate 39th Anniversary Group Show
Pirate: Contemporary Art, 7130 West 16th Avenue
Through January 13
Opening Reception: Friday, January 4, 5 to 10 p.m.
Member's Art Auction: Friday, January 11, 7 to 9 p.m.
Pirate joins Edge with a tribute to its longevity as one of Denver’s oldest artist cooperatives that doubles as a benefit art auction. Auction items by Pirate’s exceptional talent pool will be on view and up for bidding through the duration of the exhibition, but a second reception on January 11 might be the fun way to take in the art and give Lakewood's buccaneers a hand. 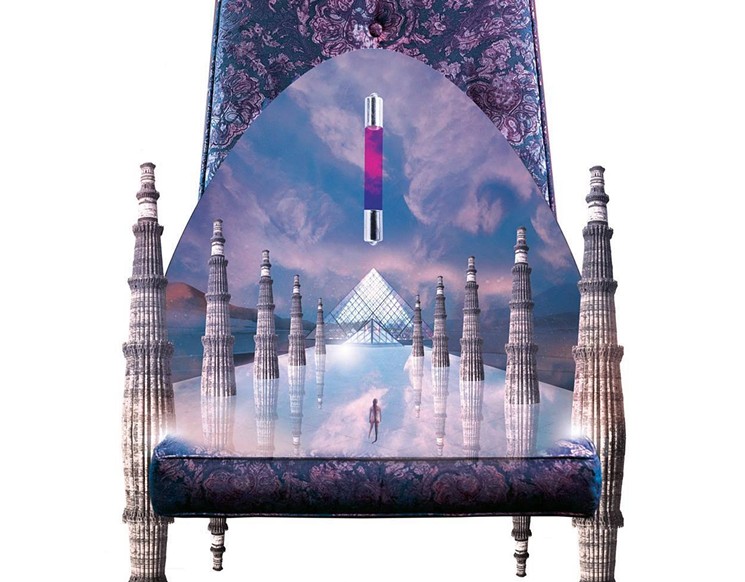 Get lost in Andi Todaro's video installation Pink Tube of Goo.
Andi Todaro
Andi Todaro, Pink Tube of Goo
Understudy, 890 C 14th Street
January 4 through 26
Opening Reception: Friday, January 4, 7 to 9 p.m.
As the holiday decorations in store windows come down, a work of art in digital-video form will go up at Understudy, the hidden artist incubator in the shadow of the Colorado Convention Center. Andi Todaro’s vignette-based work Pink Tube of Goo will screen there on a loop through most of January; for access to the accompanying audio on your phone, a number will be posted in the window. Join Todaro over drinks and other refreshments at the reception. 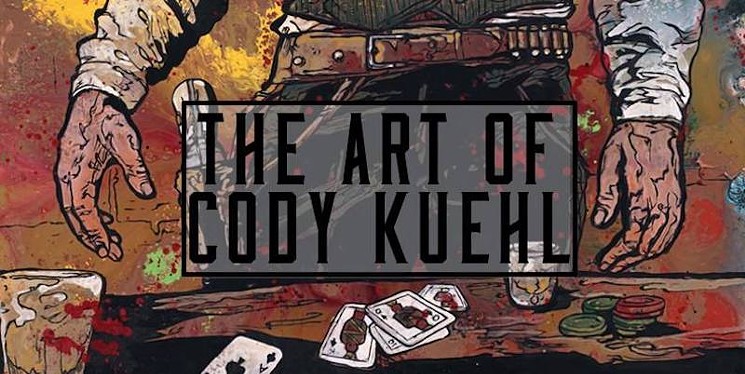 Cath Cody Kuehl's Wild West visions at the RiNo Made store in Zeppelin Station.
Courtesy of RiNo Made
Cody Kuehl
RiNo Made, 3501 Wazee Street, #109
January 4 through 31
Opening Reception: Friday, January 4, 6 to 9 p.m.
Denver artist Cody Kuehl specializes in Wild West imagery with a modern feel, making stylized paintings of cowboys in action. It’s a perfect fit for the stock show crowd that will jam the National Western Stock Show Complex and downtown Denver streets beginning next week. Hit RiNo Made at Zeppelin Station for the reception, where you can get first pick of Kuehl’s affordable works before the hordes stampede the building.