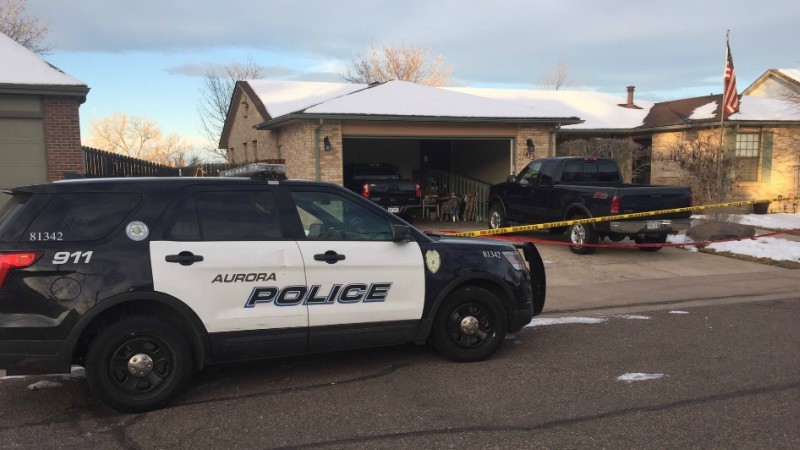 @AlanStedman7
Police at the scene of this morning's shooting.
Editor's note: On January 16, the Arapahoe County Coroner's Office released the names of the two individuals killed in the January 15 officer-involved shooting described below. They are Esmond Drauvon Trimble, who had marked his 42nd birthday the day before, and Dean Craig Heerdt, 58. Continue for our previous coverage.

Aurora has had more than its share of officer-involved shootings, including eight in just over eight months last year. But the one that took place early this morning was both deadly and highly unusual, in that it involved what the Aurora Police Department characterizes as "an armed adult male who was wearing body armor."

The man was killed in the incident, along with another adult male who appears to have been wounded by gunfire prior to the arrival of officers. They will be identified after next of kin are notified.

The 911 call that alerted law enforcement to the incident came in at 1:59 a.m. today, January 15, the APD's account of the events reveals. The caller, described as an occupant of a home at 1473 South Kenton Street, told the operator that an individual inside the residence had possession of a firearm and was "acting erratically."

As can be seen in the photo at the top of this post and a Google Maps image below, an American flag is regularly seen flying outside the house.

A look at 1473 South Kenton on a much more peaceful day.
Google Maps
Upon their arrival, officers heard "active gunfire," the narrative continues. Shortly thereafter, they're said to have been confronted by the aforementioned man in body armor, with whom they exchanged gunfire. No officers were hurt, but the man was struck, thereby ending "the ongoing and active threat."

The officers soon discovered another man nearby who was suffering from apparent gunshot wounds. Both he and the body-armored man were transported to an area hospital, but they didn't respond to treatment and were subsequently pronounced deceased.

We should eventually see exactly what happened during this fatal encounter. "Officers present at the scene were equipped with properly utilized department issued body-worn cameras," the APD points out.

The Denver Police Department will be working with Aurora's major crimes/homicide unit to investigate the shooting. In the meantime, potential witnesses are encouraged to call Agent Randy Hansen at 303-739-6710.