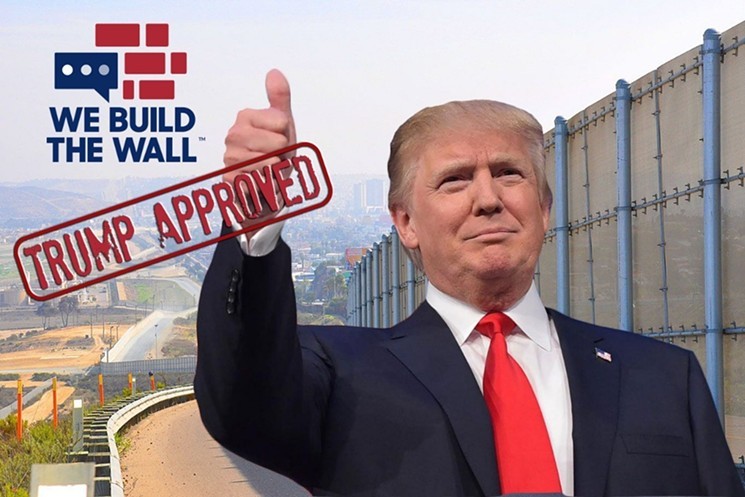 Talk about a state of emergency! At any moment this morning, President Donald Trump is expected to announce a "national emergency" that would allow him to bypass Congress, not to mention the U.S. Constitution, and grab funds to build his long-promised wall at the border between the United States and Mexico, or at least a "barrier."

But former congressman Tom Tancredo, who's just back from a second visit to the border, thinks that Trump's move will hit a fast barrier itself. "Democrats have been judge-shopping on this for weeks," he said in an email yesterday afternoon. "I think that by this time tomorrow, some U.S. district court despot will be offering an opinion he/she has already written. Then it’s off to the Supremes."

In the meantime, though, an independent effort to construct the wall continues to build. Tancredo is on the advisory board of WeBuildtheWall, a nonprofit formed by vet Brian Kolfage in late 2018. Days before the shutdown, Kolfage created a GoFundMe campaign to raise money to donate to Trump's wall-building efforts; after he learned that the government might not be able to accept the cash, he revamped his plan to collect money for a privately built wall. And that's a cause Tancredo could sign on to, since it would be far cheaper and more efficient than waiting for the feds, he says.

Two weeks ago, Tancredo traveled to Texas for a first meeting of the WeBuildtheWall advisory board; last week he was in southern Arizona, joining with Kolfage and deposed Trump strategist Steve Bannon, among others, for a town hall meeting at Sahuarita on February 8.

“We put together the original gangsters, the OGs of the MAGA movement” to help the campaign, Bannon told hundreds of Trump supporters gathered there, according to Tucson.com. Admits Tancredo: "I kinda like MAGA Original Gangsters."

No, undocumented workers will not be used on the wall-building project; a dozen years ago, the Denver Post tagged Tancredo for the illegal labor that a contractor had used on his basement rec-room remodel. The WeBuildtheWall group is in consultation with an Israeli company.

The WeBuildtheWall fund is just shy of $21 million, which might cover a few miles of a privately built barrier. But that campaign is doing better than two Colorado-based spoofs: one to build a wall around Colorado, one to send ladders to the border. Those are stuck at $100 and $10, respectively.