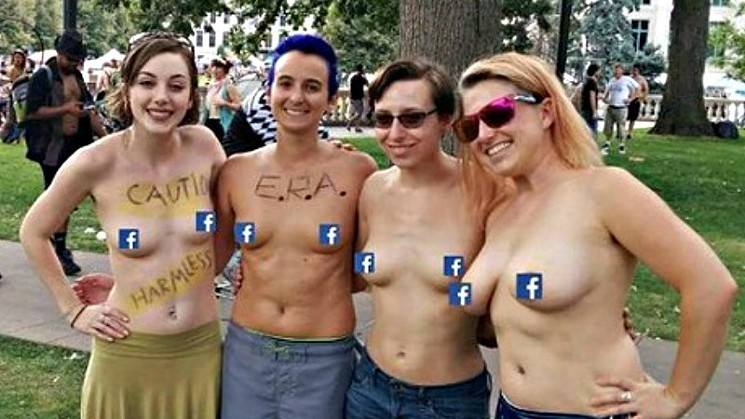 Facebook
Brit Hoagland, second from left, joins others showing their support for the Free the Nipple movement in a Facebook-friendly photo.
By a 2-1 margin, the 10th Circuit Court of Appeals has ruled that a Fort Collins ordinance making female toplessness a crime is unconstitutional. An attorney for plaintiffs Brit Hoagland and Samantha Six on behalf of an organization called Free the Nipple-Fort Collins believes this decision sets the case on a course that could lead to the U.S. Supreme Court.

"It wouldn't surprise me" if Fort Collins decides to file an appeal, notes attorney David Lane of Denver's Killmer, Lane & Newman LLP. "It would surprise me if they didn't."

At this point, Fort Collins is non-committal. When asked about the ruling, which is accessible below, spokesperson Emily Wilmsen says, "We're still sorting out what the court's decision means, and we plan to discuss next steps with city council. How the city proceeds will be up to city council."

The controversy began in earnest during an October 20, 2015, hearing at which Fort Collins councilman and former mayor Ray Martinez publicly agonized over the possibility that children under age eighteen might spy a breast live and in person, given that local laws keep "pornographic" magazines such as Playboy out of view at convenience stores.

Martinez's assertions got the attention of Hoagland, then a Fort Collins resident, who told us in a 2017 interview that she "became interested in the issue because I wanted to dip my toes into politics. I had just graduated from CSU in human development and family studies, and I had thoroughly researched this topic: how families and children are affected by sexist rules, basically. I thought this would be a very simple issue to take on with the city." 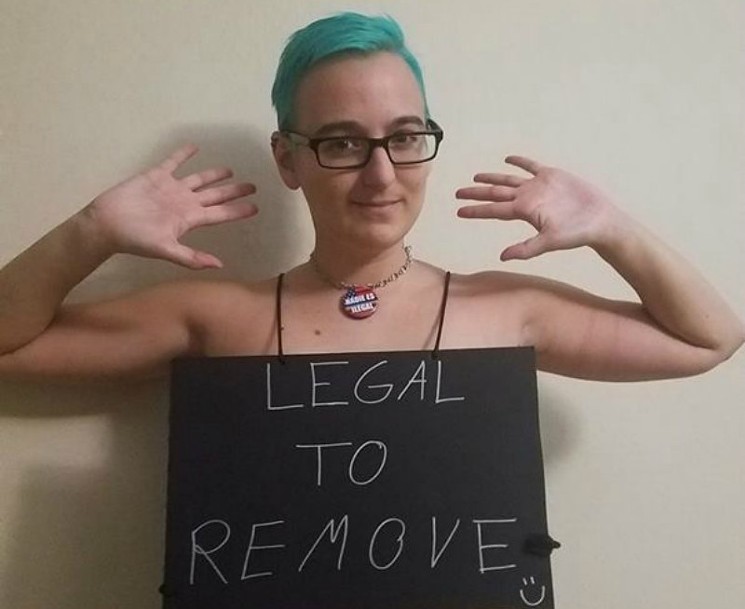 Brit Hoagland shared this photo of a court ruling against the Fort Collins ordinance in 2017.
Facebook
She was wrong. Despite her arguments against a toplessness edict, the city ultimately adopted an ordinance that reads:


No female who is ten (10) years of age or older shall knowingly appear in any public place with her breast exposed below the top of the areola and nipple while located: (1) In a public right-of-way, in a natural area, recreation area or trail, or recreation center, in a public building, in a public square, or while located in any other public place; or (2) On private property if the person is in a place that can be viewed from the ground level by another who is located on public property and who does not take extraordinary steps, such as climbing a ladder or peering over a screening fence, in order to achieve a point of vantage.... The prohibition [on female toplessness] does not extend to women breastfeeding in places they are legally entitled to be.

The ordinance established an infraction as a misdemeanor punishable by a fine of up to $2,650, or up to 180 days in jail, or both.

In the spring of 2016, Hoagland and Six responded by suing Fort Collins over the ordinance, and that October, Judge R. Brooke Jackson rejected FoCo's request to dismiss the case, allowing it to move forward on two of three claims. At the time, David Lane, the attorney who represented Hoagland and Six, told us, "The handwriting is on the wall. When the judge says, 'This statute is unconstitutional,' for whatever reason, that means this fight is basically over."

So it seemed in February 2017, when Jackson issued an injunction against Fort Collins on constitutional grounds. But while this ruling appeared to kill the ordinance, Fort Collins decided to appeal — a process that might cost the city as much as $250,000, by Lane's estimate, on an effort he regarded as doomed.

The case progressed to the 10th Circuit, and in the majority decision, the judges ask: "Did the district court reversibly err in issuing the preliminary injunction? We answer no. ... We affirm the district court’s judgment and remand the case to that court for further proceedings consistent with this opinion." 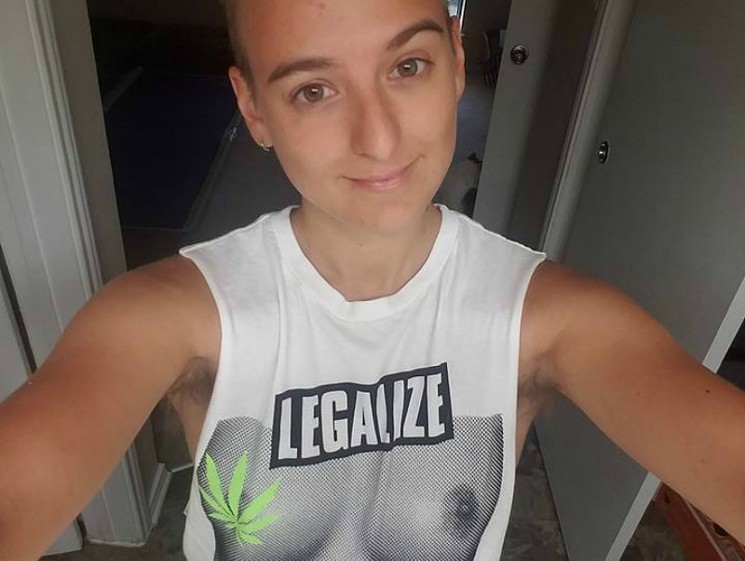 A Facebook self-portrait of Brit Hoagland.
Facebook
The reasons for this determination are many, but one key is the court's view that the ordinance violates the Equal Protection Clause of the U.S. Constitution, which states that "no state shall...deny any person within its jurisdiction the equal protection of the laws."

The majority decision describes the question as "narrow," but Lane doesn't see it that way. "The take-home is that there are very few, if any, categories of laws that exist anywhere that have the words 'Women are prohibited from...' that are constitutional. So this case will be used all over the country to deal with outdated, antiquated, sexist laws and get them off the books. So even though the issue before the court was nipples in public, the broader holding is that any statute with that phrase will be found unconstitutional, with very few exceptions."

Meanwhile, Lane cites contradictory judgments on the matter of female toplessness. "The 7th Circuit, out of Chicago, has caged the nipple, but now the 10th Circuit has freed the nipple — which means that in most of the western states, including Colorado, Wyoming, Utah, New Mexico, Kansas and Oklahoma, the nipples can run free."

This "split in the courts," as he calls it, "is the very kind of stuff the U.S. Supreme Court grants cert on" — a term that can be translated as an agreement to hear a case. "They try to resolve splits in the circuits. And this is a big one."

As for whether Fort Collins would be willing to spend the additional money to mount an appeal to the U.S. Supreme Court even though its previous expenditures have only led to losses, Lane believes "they have the stomach for it. They got a dissent in the 10th, and they have a win in the 7th — and most courts around the country that have decided on this issue have decided against our position. So I would be shocked if they didn't do it — because the bulk of the case law is on their side."

When asked if he would relish the opportunity to argue on behalf of freeing Fort Collins nipples, Lane offers a one-word reply: "Absolutely."