Sassafras Is Closing! But It Will Reopen in West Highland

One of Denver's favorite breakfast restaurants, Sassafras, is on the move.

Sassafras will leave its original location at 2637 West 26th Avenue on Sunday, March 24, but it plans on reopening in mid-April at 3927 West 32nd Avenue, in the former home of Solitaire. Owner Julia Grother says that she'd been looking for the perfect location that would provide more space for the eatery's growing fan base. "We've been in Jefferson Park for seven years, and it's been amazing — but everyone has to wait two hours for breakfast, and we just need more room," she notes. 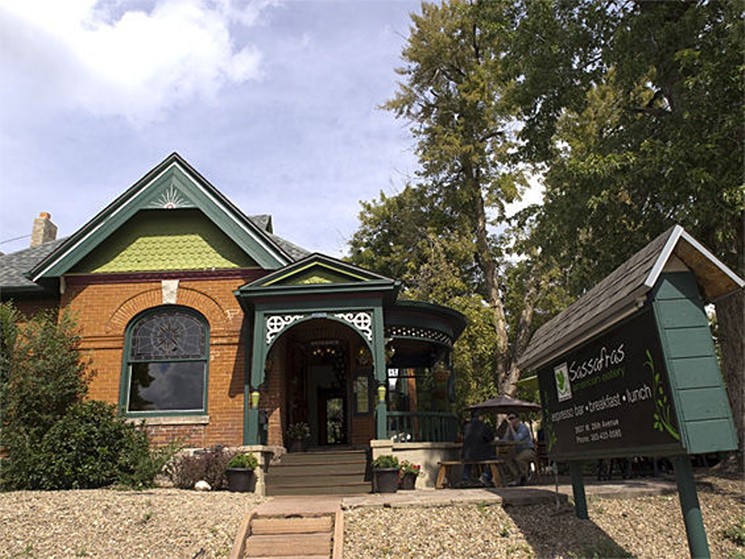 Sassafras has been serving Jefferson Park since 2012.
Mark Manger
Sassafras first started serving its Southern-style breakfasts in Jefferson Park in 2012, in a Victorian bungalow where La Loma got its start in the early '70s that is on the National Registry of Historic Places. The move will give Sassafras additional square footage on two floors, plus several outdoor eating spaces and a much bigger kitchen.

The new location, like the original, was once a residential home — or rather, two residential homes. Now one restaurant, the two neighboring houses were joined in the 1990s to become Highland's Garden Cafe, which ran from 1994 to 2013. In 2015, Solitaire opened after an extensive remodel; it closed last summer. Solitaire founders Mark and Andrea Ferguson own the property, so they will be Grother's landlords.

While Sassafras fans won't be able to get their chicken-fried eggs and buffalo hash for a couple of weeks in northwest Denver, in the meantime they can go to Grother's two other outposts: one at 320 East Colfax Avenue in Capitol Hill, the other at 1027 Washington Avenue in Golden.

And while she gets ready to open her new place in Jefferson Park, Grother will be holding a rummage sale at the Solitaire location from March 28 through March 30, to sell barware and furnishings left from the previous restaurant.