Joe Neguse on Defying Expectations During First 100 Days in Congress 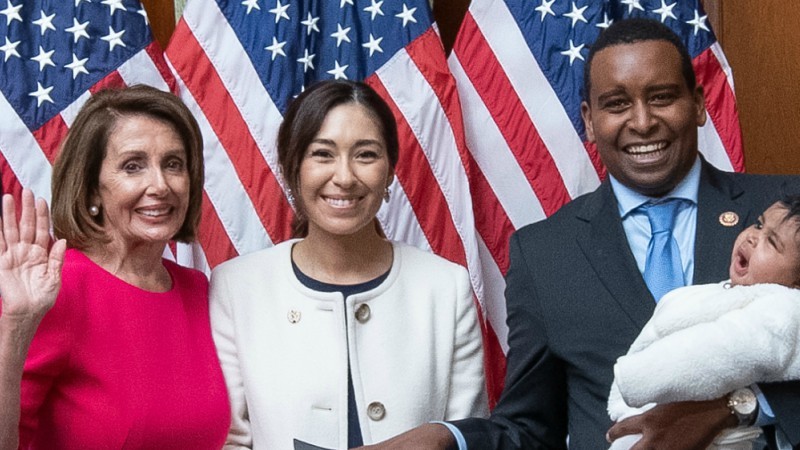 neguse.house.gov
U.S. Speaker of the House Nancy Pelosi swearing in Colorado Representative Joe Neguse, accompanied by wife Andrea and daughter Natalie, in January.
Traditionally, folks newly elected to the U.S. House of Representatives begin the job with the understanding that they'll have to pay dues for years, and sometimes decades, before getting a chance to exercise anything resembling real power. But Joe Neguse, the rep for Colorado's 2nd Congressional District, is among the members of the 116th Congress's freshman class to shatter that paradigm.

During his first 100 days in office, which the 34-year-old Neguse marked on April 13, he established himself as a rising star in the Democratic Party nationally, as well as someone who has already chalked up some actual achievements.

"It's been an exciting and impactful 100 days," Neguse says.

Since taking office, Neguse has introduced ten pieces of legislation, more than any other frosh; signed on to at least 100 other bills, including the STATES Act, co-sponsored by Senator Cory Gardner, which seeks to end the conflict between the federal government and states that have legalized marijuana sales; pushed an amendment to allow voter pre-registration for sixteen- and seventeen-year-olds to House passage; and saw two public-land provisions (the Bolts Ditch Access and Use Act and the WEDGE Act, which pertain to issues in Minturn and acreage adjacent to Rocky Mountain National Park) signed into law by President Donald Trump as part of the Conservation, Management and Recreation Act.

Meanwhile, Neguse has won spots on three important committees: Judiciary, Natural Resources and the Select Committee on the Climate Crisis. He highlights the "select" portion of the latter body's name: "It was impaneled by the Speaker [House Majority Leader Nancy Pelosi] to address climate change and the reality of what we're facing. The fact that someone from the Rocky Mountain West is on that committee is incredibly important given the ways we're experiencing climate change in Colorado, like wildfires. That's a benefit not just for the district, but for the state in general." 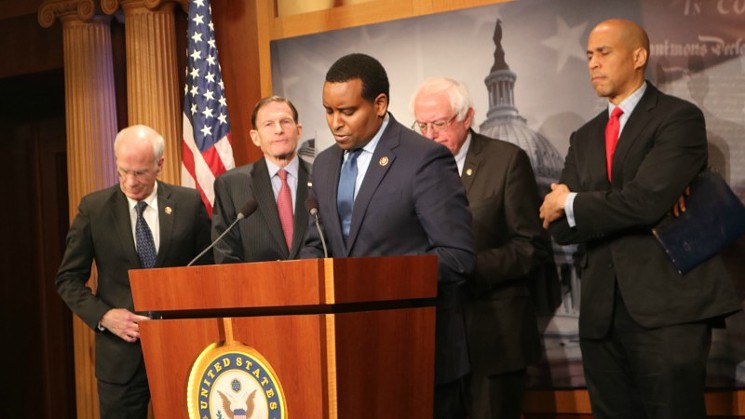 Joe Neguse at a January press conference for the Prescription Drug Price Relief Act, joined by (left to right) Representative Peter Welch and senators Richard Blumenthal, Bernie Sanders and Cory Booker.
neguse.house.gov
Neguse isn't the only first-time member of Congress to score a seat on the climate committee. He's actually one of three freshmen among the fifteen total reps, along with California's Mike Levin and Illinois's Sean Casten. In Neguse's view, "That speaks to the way in which leadership has ensured that freshman members have an ability to advocate for their constituencies and the issues they care about."

That's not all. Along with California's Katie Hill, Neguse is the freshman class representative to the Democratic leadership team led by Pelosi, who was re-elected as speaker in part because she promised to boost younger members rather than sticking with the tried-and-true seniority system. "I think she's done an incredible job of doing exactly that," Neguse allows. "The leadership team in the House is very diverse, and it recognizes the desire of newer members to play a leadership role. And with the structure of the House, I think [Pelosi] has made efforts to make sure every member of the caucus has a role to play and can leverage their talents."

Given the prominence of these gigs, Neguse has earned plenty of something freshmen not named Alexandria Ocasio-Cortez rarely get: prime spots on national news programs. He's appeared frequently on MSNBC, popped up on CNN and even been invited to take part in a roundtable discussion on CBS's Face the Nation. When asked why he thinks he's earned so much face time, he replies, "Your guess is probably better than mine. But my sense is that we have a story to tell that's connected to my own family story and my background as the son of immigrants. I've been eager to share that, and share the ways we can solve problems, so I've been very excited to have those opportunities — and hopefully there will be more opportunities in the future to talk about the issues I care about most and the ones that matter the most to my constituents."

Speaking of AOC, the two have forged a close working relationship on subjects such as the Green New Deal, which Neguse supports — and he feels a similar kinship with other freshman Dems.

"In this class, I think there are a large number of incredibly talented, idealistically driven and focused people who also happen to be young," he allows. "We dropped the average age of members of Congress by a decade with this election. Alex is 29, and many other members, like Katie and [New York Representative] Max Rose are under the age of 35. I'm very grateful to have been elected to a leadership role in representing them, and I consider them all dear friends. I really enjoy working and partnering with them."

He adds: "I think the American people spoke pretty loudly during the last election that they're looking for bold change. They wanted their representatives to hit the ground running, and that's what we've done."

Joe Neguse with Colorado Senator Michael Bennet in February.
neguse.house.gov
Stylistically, the freshmen are different, too. During a recent House speech touting the performance of the House freshmen to date, Neguse recalls, "I made a case about town halls, which for us are the rule and not the exception — and that wasn't always the case in prior Congresses. We've held eleven town halls in the first 100 days all across the district, and I think that's indicative of a new generation of leadership in the House that's great for our country and for Colorado."

Of course, Neguse might have accomplished even more of his goals if progressive bills didn't have a habit of dying at the door of the U.S. Senate, which is still under Republican control and boasts a gatekeeper, Senator Mitch McConnell, who serves as a one-man blockade against any measure that doesn't have Trumpian pre-approval.

"It is frustrating that the Senate majority and Majority Leader McConnell refuse to take up so many incredibly important pieces of legislation that have passed the House," he acknowledges. "He won't even give those bills a vote or let them have a hearing. But that being said, we're trying to legislate where we can." He sees the aforementioned public-lands provisions as potential "building blocks that we can use to hopefully get other bills signed into law. Some things we're going to agree on, and others, like the Green New Deal, we won't. But it's important to do both things — push for wins where we can while simultaneously moving the needle the best we can on some of those bigger issues that are comprehensive in scope, like climate change. It's a balance."

In the meantime, Neguse, through his role on the Natural Resources Committee, has secured an early hearing for the Colorado Outdoor Recreation and Economy Act, which he introduced in conjunction with Senator Michael Bennet; it calls for the conservation of approximately 400,000 acres of public lands in the state.

That's the kind of move freshmen can seldom pull off. He's clearly learned a lot in his first 100 days.