Denver District Attorney's Office
Brice Fitch's booking photo.
Colorado's Make My Day law is among the state's most misunderstood statutes. The measure, originally passed in 1985, provides some legal protection for homeowners who kill intruders, but it's not a free pass to shoot an alleged thief, even if the crime is being committed on or near the victim's property — as Brice Fitch found out the hard way.

Last week, the Denver District Attorney's Office charged the 24-year-old Fitch with first-degree murder in the death of Guillermo Medrano-Sandoval, 26. Medrano-Sandoval is believed to have been breaking into a car owned by Fitch and parked outside his home when the latter used an AR-15 automatic rifle to fatally shoot him. Fitch hasn't been accused of any wrongdoing related to ownership of the rifle — but the narrative in the case's arrest affidavit boasts plenty of other twisted ambiguity.

At 4:10 a.m. on April 19, according to the document, members of the Denver Police Department responded to 367 South Jasmine Street on a report of an attempted motor-vehicle theft and shots fired. At the address, they found Fitch, who's said to have waived his right to remain silent in order to provide a detailed account of what had gone down.

An interesting note: Throughout the police report, Fitch is referred to as "the victim."

About ten minutes earlier, around 4 a.m., Fitch told investigators that he'd heard a rustling sound while letting his dogs into the back yard. That's when he noticed that the door to his black late-model Dodge Charger was open and the interior lights were on.

After yelling, "Hey, get out of my car," Fitch said he went into his house, told an unnamed person to call the police, and retrieved his AR-15. Back outside, he slipped between a boat and a truck he also owns and soon spotted a male and a female trying to enter the car. Once they did so, Fitch saw the driver reach for the console and shift the Charger into drive. He allegedly swerved in the direction of Fitch, who fell to the ground — at which point, the affidavit states, "the gun went off."

Fitch insisted that he didn't fire intentionally — not at first, anyhow. Instead, the document allows, "the weapon accidentally went off" because "he had his finger on the trigger" when he took a tumble. But he admitted that he squeezed off two more rounds on purpose after the Charger stopped mid-block; he did so "because he feared that [the thieves] were coming back to cause him harm when he observed the brake lights come on." He believed he struck the back of the vehicle and reported seeing an air filter on the ground. 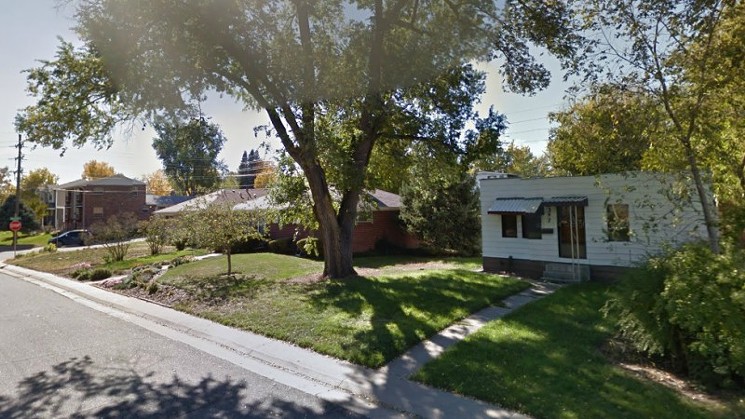 The shooting took place in front of 367 South Jasmine Street (the white house to the right).
Google Maps
The Charger wasn't rendered immobile by the gunfire. It disappeared after heading northbound on South Jasmine, and Fitch was subsequently transported to an area hospital for treatment of injuries described as minor.

Later on the 19th, the scene shifted to a new jurisdiction. That evening, the DPD's homicide unit was contacted by representatives of the Aurora Police Department, who'd found a vehicle matching the description of the Charger on the 12000 block of East Exposition Drive at about 1:11 p.m. Its window had been shot out and Medrano-Sandoval was dead inside, having suffered "a single perforated gunshot to the chest."

It's unclear from the affidavit if investigators have a theory about which of Fitch's shots struck Medrano-Sandoval — the one he insisted had been fired randomly when he fell or the two he'd unleashed as the thieves fled. But the murder charge speaks volumes, particular in regard to what Fitch plainly saw as his right to defend himself against being robbed.

A primer on Colorado's Make My Day law from Miller Leonard, PC helps parse the legalese. The guide notes that "the resident who used lethal force against an intruder must have some cause to believe that the intruder was going to harm someone in the house." Moreover, the law doesn't apply if "you shoot someone who is being shady in your backyard." Those who do "can be charged with homicide," since "Colorado's Make My Day law only applies to intruders who are within the walls of your home."

That's why Keith Hammock, who shot two teens trying to steal plants from his backyard marijuana grow in 2016, was prosecuted and ultimately convicted of second-degree murder. And it explains the current legal jeopardy being faced by Fitch, who has gone from being the victim to the accused.