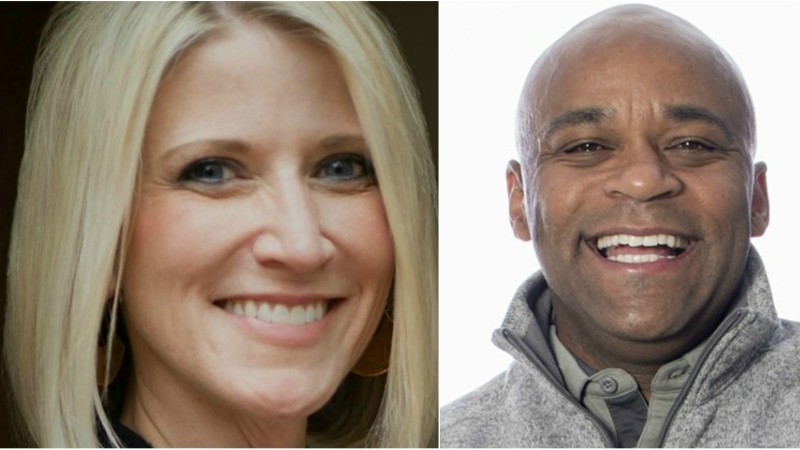 jamiefordenver.com/hancockformayor.com
Jamie Giellis and Michael Hancock will go head-to-head in the June 4 runoff.
The results in Denver's 2019 election will spur multiple runoffs just under a month from now. Incumbent Mayor Michael Hancock must best former RiNo Art District president Jamie Giellis to keep his job on June 4, when five Denver City Council races will also be decided. Meanwhile, Ordinance 300, better known as Right to Survive, failed by a margin that left plenty of veteran political observers slack-jawed, while Ordinance 301, which calls for the decriminalization of psilocybin mushrooms, passed in the final count, overcoming a deficit that many thought was insurmountable at the last possible minute.

Results are unofficial until certification next week.

Candidates for various positions had to exceed 50 percent of the vote in order to avoid a runoff, with the exception of the folks seeking the two at-large seats on the city council. In that competition, the top finishers are declared victors, and the incumbents, Debbie Ortega and Robin Kniech, were able to outdistance rivals Tony Pigford, Jesse Lashawn Parris, Johnny Hayes and Lynne Langdon. Ortega landed at just over 36 percent, with Kneich scoring more than 27 percent.

Runoffs will also be necessary in District 1, where Amanda Sandoval and Mike Somma are set to face off, and in District 3, where Jamie Torres and Veronica Barela are still standing. And while Timothy O'Brien had no opposition in his bid to remain Denver auditor, the sprint for clerk and recorder proved tight, tight, tight, with Paul López and Peg Perl back in the ring next month.

There's no suspense over Right to Survive, which notched a mere 18 percent of the vote. And the psilocybin mushrooms ordinance is perhaps the biggest shock of the election; initial results were so dire that media outlets declared it a failure. But last-minute voters — perhaps stoners, 301's supporters speculate — barely pushed it beyond the 50 percent mark.

As for the highest-profile sweepstakes, Mayor Hancock faced a strong lineup trying to prevent him from securing a third term. Kalyn Heffernan earned about 2 percent, Penfield Tate about 15 percent, Lisa Calderón about 18 percent and Giellis about 25 percent. Their combined strength held Hancock shy of 40 percent, forcing him into the runoff — a fate he avoided in 2015, when he first ran for re-election.

By the way, the first email blast from the Hancock forces about his runoff campaign arrived at 10:16 p.m. on election night. It ended with the following quote from the mayor: "Let’s get to work!"

Continue to see the most recent digits in each category. The names of winners appear in bold italics, while those in the runoff are reproduced in standard italics.