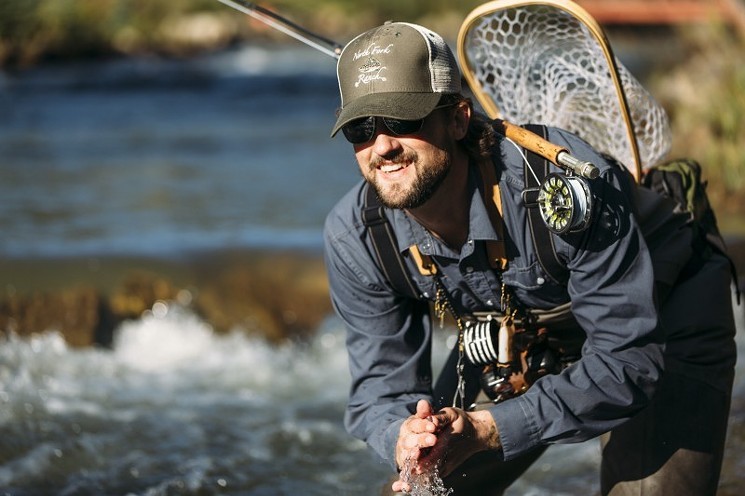 Courtesy photo
For Austin Eubanks, fishing was therapy.
The attack on Columbine High School took place more than twenty years ago, on April 20, 1999. But for those who lived through the terror and trauma that killed twelve students and a teacher and injured 21 others, the assault isn't a thing of the past, as is clear in "The Aftermath," Alan Prendergast's recent story in which survivors talked about the wounds that won't heal.

This was certainly true for Austin Eubanks, who was just seventeen when he watched his best friend, Corey DePooter, die in the Columbine library a few feet away from him. Eubanks subsequently spent twelve years as an opioid addict before turning his life around and finding new purpose in sharing his story with others, as he did in a 2016 interview with Westword, published eighteen years to the day after the mass shooting.

But this hopeful arc ended tragically over the weekend. On the morning of May 18, Eubanks was found dead in his Steamboat Springs home.

The cause of Eubanks's death has yet to be determined, but no foul play is suspected. An autopsy is scheduled to take place today.

As Prendergast pointed out in his 2016 story, pellets from the shotgun blast that killed DePooter struck Eubanks in the hand and knee, and before long, he'd gotten hooked on painkillers. "As the prescriptions ran out, I turned to illicit substances," noted Eubanks, who had never used alcohol or drugs prior to the attack. "I continued to manipulate doctors into writing more prescriptions and got to the point where I was using opiates every day. I never had to feel anything that way." 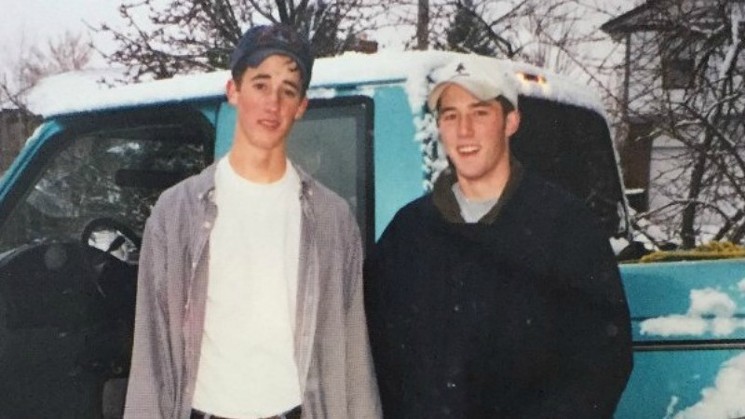 Austin Eubanks and best friend Corey DePooter hid under the same library table during the 1999 attack on Columbine High School. DePooter was killed.
Courtesy photo
Eventually, Eubanks was smoking or snorting 300 milligrams of Oxycontin a day, supplemented by a dose of Adderall each morning and intermittent Xanax use.

Despite his habit, Eubanks managed to find work in the advertising industry. But he also began to rack up criminal offenses ranging from check kiting to auto theft. "I would describe myself as a rational and well-rounded person, but I was using substances to the point where it shut down the frontal lobes of my brain," he told Prendergast. "Everything I did was on impulse, whether it was sexual relationships or stealing or drug use."

In 2011, when he was 29, his downward spiral landed him in a jail cell — and he was so out of it that he didn't know how he'd gotten there. So he reached out to the Stout Street Foundation, and while three previous stints in rehab had failed, this one stuck. He eventually became program director at The Foundry, a Steamboat treatment center, and spoke frequently about the dangers of opioids, as he did during TedxMileHigh in July 2017.

As April 20, 2019 approached, Eubanks was much in demand when it came to sharing his Columbine memories, and he didn't shy away from doing so. That day, he retweeted a clip from a Vice News piece on the subject in which he participated.

"I thought it would end after us.”

We spoke to survivors of five school shootings in the past two decades to see what’s changed and what hasn’t. pic.twitter.com/LiKnsF86Ov

On May 2, Eubanks also retweeted an item from the Naugatuck Valley Health District, an agency in Seymour, Connecticut, about a speaking appearance.

The item reads: "Austin Eubanks, injured survivor of the Columbine shooting and Addiction Recovery Speaker talked about his powerful story at today’s @CTDPH Opioids Conference. Thank you @eubanksaustin for sharing with us. For more about Austin, visit his website: http://austineubanks.com."

Eubanks's site remains online, allowing continued access to accounts of media appearances in which he repeatedly sent the message that people struggling with addiction weren't alone — and it was never too late to make a fresh start.

Three years ago, Eubanks told Prendergast that on April 20, he would be looking back on Columbine in a private but meaningful way.

That's a perfect way to remember Austin Eubanks, too.