Two well-known breweries, both with more than five years of service behind the bar, will close their doors at the end of May, according to their respective Facebook posts. Fate Brewing in Boulder and 38 State Brewing in Littleton join a small but growing list of beer makers that have shuttered in the first half of 2019 — including Fermaentra Brewing, Lost Highway Brewing and Uturn BBQ — in the face of increasing competition in the industry.

38 State Brewing, which became Littleton's first taproom-only brewery when it set up shop at 8071 South Broadway in 2014, will close on May 31. Founded by Brett Blazek, Jason Virzi, and Mike and Kim Keating, the brewery was known for its patio, community vibe and gorgeous wooden tasting trays. (See 38 State's Facebook statement at the end of this story.)

Fate Brewing was opened by Mike Lawinski in February 2013 in the former Jose Muldoon's Tex-Mex restaurant at 1600 38th Street. The 230-seat brewpub served a full food menu and several well-loved beers — like its watermelon kolsch — and had a stunning, two-tiered patio that was one of the best in the state. It will continue to operate through May 27, according to a note on Facebook.

Fate had been in a public downward spiral since last October, when the Town of Lafayette seized the brewery's Lafayette location, the Fate Ale House, because of tax issues. Fate had opened the location in 2016 and had planned to open a third spot in Louisville at the time. Then, in November 2018, Fate filed for Chapter 11 bankruptcy protection, claiming more than fifty creditors. 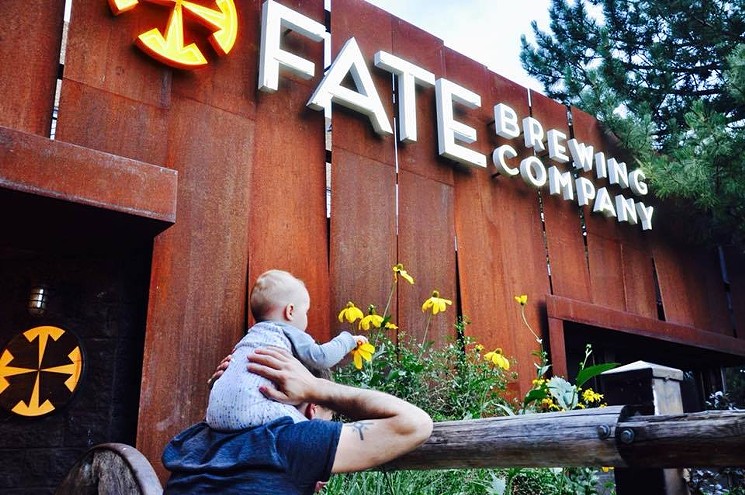 Fate Brewing
Although Fate's problems surprised a lot of people, they had been building for a while. In 2015, Fate acquired the leases to Avery Brewing’s collection of former warehouses at 5763 Arapahoe Boulevard (after Avery moved to its current brewery) with plans for a production brewery and eatery. But after a two-year bureaucratic process, the federal Alcohol and Tobacco Tax and Trade Bureau rejected Fate's application. Fate put the buildings back on the market, but the leases and delays had caused serious financial issues.

In April, Fate sold the rights to use the trademarked name Fate Brewing — for $20,000 — to a company called McFate Brewing in Arizona; McFate had also been called Fate Brewing until 2016 when Boulder's Fate sued, forcing the name change. McFate rebranded, but has decided to return to its original name now. The lawsuit made headlines — and angered a lot of beer drinkers who didn't think the lawsuit was necessary.

In a Facebook message posted Monday night, though, Lawinski blamed the Boulder Daily Camera, which has written about some of Fate's troubles over the years, for its problems.

In 2013, FATE Brewing Company set out to make people smile through the joy of food, beverage and great service. It was our mission to share with the world our passion for craft beer, innovative crave-able food, and devotion to service and community. FATE accomplished, JUST THAT.

We worked hard to defy the perception of the, “brewpub” by unifying craft beer, beverage and food in a strong harmony that was rarely seen in that format. These efforts brought us accolades from national publications like Bon Appetit as well as local publications naming us, “Top 10 Best New Breweries to Watch”, “Best New Restaurant”, “Best BBQ” and even soaring to Great American Beer Festival Gold Medal heights for our beer. FATE is often credited and praised for a nationwide craze in watermelon beer, light style coffee ales, tequila barrel aged Gose, and for being a true innovator in the market.

FATE grew to be a large craft beer producer, sending nearly 2,000 barrels of beer in kegs and cans to markets around the state, while serving 1,000 barrels of beer in-house. The brewpub was brewing at capacity and was unable to meet the demands of the local market. In 2015, with strong support, we made a decision to expand our beer operation to an additional facility in Boulder. This expansion would allow us to increase our brewing capacity and expand to an off-site production and distribution center. After great efforts and significant costs, the federal licensing authorities denied a brewpub license for the space due to a technicality with the layout, despite a previous production brewery and taproom successfully operating in the space for over 20 years. This project, although mostly unknown to the public, was something that FATE continued to carry the burden of financially.

FATE has ALWAYS been PROUD to be a family-run business that thrived from the output of our employees, grassroots efforts and organic direction. We are proud of all we have accomplished and helped influence in the Boulder restaurant scene, Colorado beer industry and the significant amount of money we have poured back into the community through the Boulder Fire Department, University of Colorado, numerous Boulder Valley School District schools and countless local non-profits.

Despite the successes, accolades, growth and philanthropic efforts throughout our lifespan, it’s unfortunate that we have been a continual target by our local community paper. The inaccurate coverage, reporting errors and negative targeting has had a significant impact on our business, and correlates directly with a noticeable decrease in our volume, attrition of staff, misconception of closure, brand confusion and challenges for our team, time and time again.

After six and a half laps around the sun, this month will be the last leg of that journey. We will be closing our doors following service on Monday, May 27th, 2019. Despite the daily joys we feel serving the community and connecting with our friends, the pressures of the business and the undeserved negative coverage have weighed on us too greatly. It is unfortunately time that we say goodbye.

From first dates to wedding ceremonies, from diagnoses to remission, from company celebrations to retirement parties, from study groups to graduation parties, from baby showers to births, from sports losses to wins, from tears to laughter… we have truly seen it all and we are IMMENSELY GRATEFUL for all of the memories! THANK YOU for allowing FATE to be your place to restore, for choosing us over the years and for spending your time and money in our establishment. We have been an extremely close-knit family from the very beginning and we are forever grateful for the opportunity we have had to positively impact the community.

We would love to see as many of our FATE friends and family one last time, and please don’t hesitate to share a story. Through the grieving process we will undoubtedly face as this dream comes to an end, we welcome all the joyful memories.

IN GRATITUDE,
MIKE LAWINSKI, THE LAWINSKI FAMILY
& THE FATE TEAM

All good things must come to an end... It is with a heavy heart that we announce we’ll be closing our doors for good on May 31st. It’s time for us to move on to our next adventure. How time flies… The past eight years have truly been the experience of a lifetime! The good times shared by all, the laughter, and award winning craft beer will all be missed. We were blessed to have such a wonderful staff throughout the years.

We’d like to thank each and every one of them, especially those who’ve stuck it out with us for so long, including: Gordon Stant for always having the wheel of the ship in the brewhouse. The man is an amazing brewer!!! Angie Boyle who we hired her away the day we met her. If you don’t know how it is, she’ll tell you!!! Then there’s Steve Schuett, who’s willing to work as much as needed, which at one point included a streak of 21+ consecutive days. A big guy with an even bigger heart!!! Last but not least, Ryan “Baby Duck” Cosslett, a dedicated cellerman who went from a wonderful customer to an integral part of what we do!!!

We would also like to thank all of our customers, especially our regulars, for without you none of this would’ve ever been possible!!! We’ve been blessed to have met so many wonderful people throughout this journey that we would’ve never known otherwise. The smiles and high fives will be missed the most.

We will be open regular hours through the end of this month. If you have a chance, please stop in and say goodbye. We’ll be having one final hoorah on Friday May 31st. Wishing ALL of you a fond farewell.