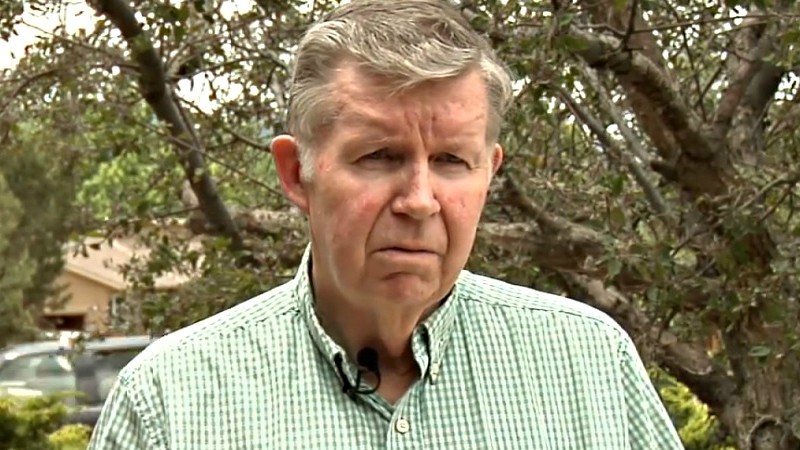 Fox21 via YouTube
Douglas Bruce during a 2012 interview.
A proposed ballot initiative that would fully repeal one of the most consequential and controversial provisions in the Colorado Constitution can proceed, the state's Supreme Court has determined.

In a decision issued Monday, June 17, the Colorado Supreme Court ruled that Proposed Initiative 3, a measure submitted to the Secretary of State's Office in January, meets the so-called single-subject requirement for statewide ballot initiatives, and can now move forward.

Proposed by Carol Hedges of the Colorado Fiscal Institute, Initiative 3 seeks a straightforward, complete repeal of the Taxpayer's Bill of Rights, a constitutional amendment pushed by Douglas Bruce and passed in 1992 that imposes a wide variety of restrictions on state and local governments' ability to raise taxes, including a requirement that all new taxes or tax increases be approved by a vote of the people.

"In answering this important question today, the Colorado Supreme Court has given voters additional options for addressing the fiscal challenges the state faces," Hedges said in a statement. "Today's opinion clarifies voters' role in making changes to their state constitution. I'm thrilled that those options include a full repeal of a provision that has made Colorado an outlier on state tax policy for nearly 30 years."

Previous attempts to fully repeal TABOR have run afoul of the single-subject rule, a requirement that ballot questions "must be limited to a single subject, which must be clearly expressed in its title." In February, the state Title Board, which oversees the ballot initiative process, ruled that Initiative 3 violated the rule; Hedges and her fellow petitioners appealed the decision to the Supreme Court.

Narrowly approved by Colorado voters in 1992, TABOR was the brainchild of Douglas Bruce, an anti-tax activist who has long been a controversial figure in state politics. While serving in the Colorado House in 2008, he drew criticism for a speech calling Mexican workers “illiterate peasants,” and was formally censured for kicking a photographer on the House floor. He was later charged and convicted of felony tax fraud, money laundering and attempted bribery, serving brief jail terms in 2012 and 2016.

TABOR’s anti-tax provisions upended public policymaking at the state and local levels in Colorado, and while many of its most restrictive measures have been repealed or weakened over the past 27 years, critics still blame the amendment for budgetary shortfalls in education, transportation and other public services in Colorado. Since its passage, just two statewide tax increases — a tax hike on tobacco and a 2012 measure to legalize and tax recreational marijuana — have been approved by voters. Despite boasting one of the country’s strongest economies, Colorado is 42nd among states in per-pupil education funding and 46th in teacher pay.

The final text of Initiative 3 is likely the shortest proposed ballot initiative in state history. It reads in full: "Be it Enacted by the People of the State of Colorado: SECTION 1. In the constitution of the state of Colorado, repeal section 20 of article X."

Despite the initiative's brevity, elections officials and state courts have repeatedly ruled that such a measure violates the single-subject rule — a requirement enacted just two years after TABOR’s passage, in 1994’s Referendum A. The rule was long thought to prevent TABOR from being repealed as easily as it had been enacted — this year, Hedges and the CFI proposed eighteen different anti-TABOR ballot initiatives aimed at testing its limits — but Monday’s Supreme Court ruling abruptly changes that.

"The initiative could not be written more simply or directly," reads the court's majority opinion, authored by Justice Richard Gabriel. "It essentially asks voters a single question: Should TABOR be repealed in full?"

"Accordingly, we reverse the Title Board’s contrary determination and return Initiative #3 to that Board for the purpose of setting a title, ballot title and submission clause," Gabriel concludes.

If TABOR opponents choose to pursue full repeal, the initiative would still have to collect enough valid signatures from voters across the state and wouldn't be on the ballot until 2020. But Coloradans will vote on two other TABOR-related measures this November.

Earlier this year, Democrats at the state legislature referred to the 2019 ballot a measure known as Proposition CC, a so-called de-Brucing amendment that would eliminate statewide revenue caps and allow the state to keep excess tax revenue rather than automatically refund them, as TABOR currently requires. It will be joined on the 2019 ballot by Proposition DD, a measure to legalize and tax sports betting.